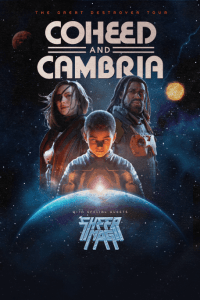 New Orleans, LA (February 26th, 2022)– Saturday night revelers in New Orleans took a break from the sights and sounds of Carnival Season to enjoy a different kind of celebration. Still decked out in their Carnival gear from the afternoon’s parades, fans flocked to The Fillmore to welcome Coheed and Cambria, who are touring in support of their upcoming album Vaxis – Act II: A Window of the Waking Mind.

To start the evening, special guest Sheer Mag brought their powerful blend of 70s-inspired rock and punk sounds straight from Philadelphia. The band, fronted by Tina Halladay, with Matt Palmer on guitar and siblings Kyle and Hart Seely on guitar and bass, moved quickly from one energetic song to the next, while fans sang and screamed along.

Coheed and Cambria fans are no strangers to Sheer Mag, having been introduced to them on Coheed’s S.S. Neverender Cruise this past October. Sheer Mag paused for a moment to propose a toast in appreciation. The crowd raised their glasses, and I raised my camera, as we toasted to Coheed and Cambria and their generosity. Halladay joked about being thrown in the brig, aka “boat jail”, before dedicating a “sexy love song”, Need to Feel Your Love, to Coheed.

As Coheed and Cambria opened their set with fan-favorite In Keeping Secrets of the Silent Earth: 3, The Fillmore exploded with an energy unlike anything I’ve witnessed before. Claudio Sanchez’s vocals and guitar, along with Travis Stever’s guitar, Josh Eppard’s drums, and Zach Cooper’s bass, blended with the voices of fans who were more than ready to welcome live music back into their lives. As I attempted to capture this energy while armed with only a camera, I looked out into the crowd at what, at least from the photo pit, appeared to be a sea of glitter, beads, and Coheed tattoos.

Like Sheer Mag, Coheed and Cambria barely paused in between songs, while weaving through a 15 song set list spanning their 20 year career, including two songs from their upcoming album Vaxis – Act II: A Window of the Waking Mind. However, they did stop for a moment to wish crew member Ryan a happy birthday, and enjoy a shot of tequila with him, even though none of them are “tequila people”. They wrapped up their set with The Willing Well IV: The Final Cut from 2005’s Good Apollo, I’m Burning Star IV, Volume One: From Fear Through the Eyes of Madness.

The Great Destroyer Tour will wrap up on March 22nd in Harrisburg, PA, before the release of Vaxis – Act II: A Window of the Waking Mind on May 27th.