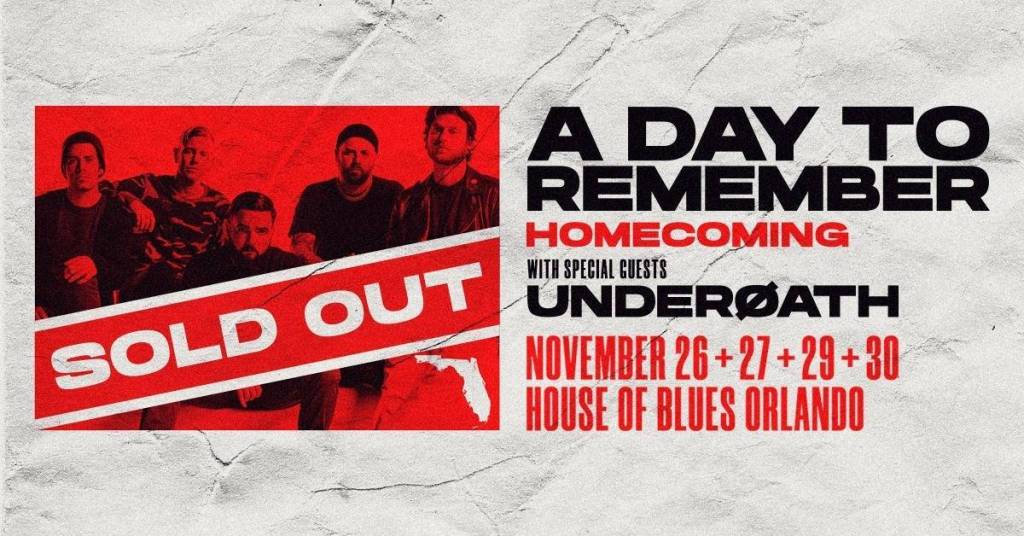 Orlando, Florida (November 30, 2019) – What would a highly popular band do after finishing up an incredibly successful package tour? Head home to family and friends, and take a well-earned break maybe? Possibly get to work on some new material or head into the studio? With their 28-date Degenerates Tour just put to bed, A Day To Remember did more than just head home to Florida – they teamed up with fellow Floridians Underoath and held a four-night sold-out homecoming party at The House Of Blues in Orlando, FL.

If there is one band that defines the term “high energy” it’s Underoath and tonight’s show only further cemented that reputation. When the stage lights came up, guitarist Timothy McTague came out on stage and ran over to a drum at the side of the stage and pounded out a frenetic drum solo. The rest of the band quickly joined him, and they kicked the night off with a wild performance of “In Regard to Myself”. Clearly, they were fired up to be in front of a home state crowd. While they were playing “On My Teeth”, singer Spencer Chamberlain uncorked a huge twirl of his microphone. He swung it so high it was nearly in the rafters of The House Of Blues. This would be their blueprint throughout the night; fired up, intense performances. Even keyboard player Christopher Dudley was on fire. There was barely a moment when he stood still. Between his head banging and hair flying, not only was he a sight to behold, but he never missed a note while playing.

Among the fan favorites that they played in their ten-song set, was “It’s Dangerous Business Walking Out Your Front Door”, “A Boy Brushed Red Living In Black and White”, and “Writing On The Walls”. During their last song, “Sink With You”, Chamberlain had enough of being on stage. He climbed off, went over the barrier and crowd surfed part of the song. That was the perfect way to end their set!

Now that Underoath had revved up the packed house into a frenzy, it was now time for A Day To Remember to come out and take matters into their own hands and blow the roof off the place. When the curtain came down the band was already in place and they burst into “The Downfall Of Us All”. It only took a few notes of that song for the place to blow up. Almost instantly the crowd surfing began. Lead singer Jeremy McKinnon was a high energy demon. He was in constant motion, not just on the stage, but he was constantly prowling the wall of speakers that were placed in front of the stage. Bassist Joshua Woodward throughout the night would stare out in the crowd and see the just how wound up the sold-out crowd was and put on a huge smile.

The one cover song they played was the huge hit “My Own Worst Enemy” by Lit. They had the whole crowd singing along and definitely put their own stamp on that song. Another great sing along moment came when they ripped into their latest hit song “Degenerates”. Everyone was singing the chorus “my friends are degenerates, but I’d never change them”. If anything, you could say it became a battle cry! Their mammoth 21-song set was stacked with tons of their hit songs from their catalog of albums.

When it came time to play “Rescue Me” they had the smoke canons shoot up columns of smoke in the beginning, then shortly after huge beach balls were tossed into the crowd as well as rolls of toilet paper. On the giant screen behind the band they were playing images of the whole crowd singing along. Fans got to hear some of their big hits like “Paranoia”, “Resentment” and “I’m Made Of Wax, Larry, What Are You Made Of”. Many times, during the night, McKinnon would hop off the stage and lean over the rail to high-five fans or shake hands with them, thrilling all the lucky ones within arm’s reach. After a brief break, The band came back out for the encore. McKinnon told the crowd that for normal shows they like to play three songs. But because this was a special show, they were going to give the fans four songs. Needless to say, the place erupted in cheers. With that they launched into “If it Means A Lot To You”, and like flipping a switch the party went back into top gear. The party continued all the way through the last song of the night “The Plot To Bomb The Panhandle”. As the song came to an end The smoke cannons came alive one last time and with a bang confetti cannons went off filling the whole place up with confetti. A perfect ending to a great night.

With four sold-out nights at the House of Blues in the books, the guys in A Day To Remember gave their hometown fans one hell of a special time. By bringing along Underoath, this all Florida bill became more of an all-star show that won’t soon be forgotten by the lucky ones who were there. With any luck, they will keep doing this and it will become a yearly party for all their hometown fans.