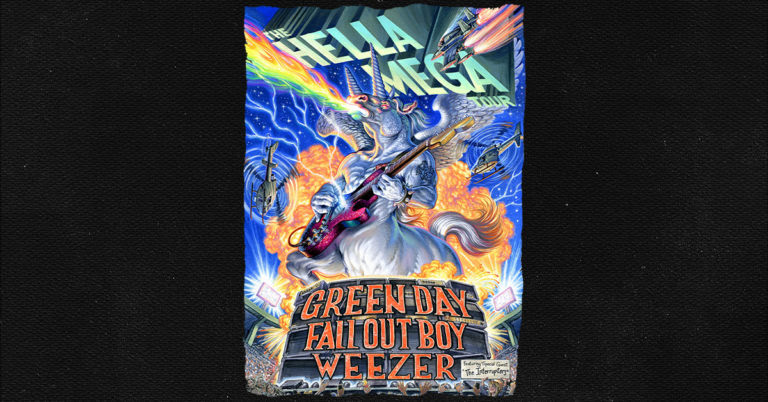 Green Day, Fall Out Boy, and Weezer, three of the biggest acts in rock music, are gearing up to get back on the road this summer. THE HELLA MEGA TOUR, their U.S. headlining stadium run, kicks off with new 2021 dates beginning July 24 in Dallas, TX. Produced by Live Nation, the 21-city North American outing will bring the bands to some of the most renowned stadiums including Dodger Stadium, Wrigley Field, Citi Field, Fenway Park, and more, before wrapping September 6 in Seattle, WA.  The Interrupters will appear as special guests on the tour.

Additionally, two new shows were announced today – August 17 in Columbus, OH at Historic Crew Stadium and September 1 in Milwaukee, WI at Summerfest. Pre-sales for those shows begin Thursday, May 20th at 10am local time with general on sale for all tickets beginning Friday, May 21st at 10am local time. Tickets for all shows, including the rescheduled dates, along with more information is available now at www.hellamegatour.com.

In celebration of this announcement, all three bands will participate in Good Morning America’s Summer Concert Series on July 17th. Weezer and Fall Out Boy will perform with Green Day joining them for an exclusive interview.

Additionally, today, Green Day releases their newest song ”Pollyanna” (LISTEN HERE) out now. This weekend, Fall Out Boy will perform on the season finale of American Idol, airing live coast-to-coast on May 23rd at 8pm ET/5pm PT on ABC.  Last week, Weezer released their newest single “All My Favorite Songs” feat. AJR and performed their song “All The Good Ones” off of their latest metal influenced album Van Weezer (LISTEN HERE) on The Tonight Show starring Jimmy Fallon.

Five-time Grammy Award-winning Rock and Roll Hall of Fame inductees Green Day unleash their brand new song “Pollyanna” out today. Formed in 1986 in Berkeley, CA, Green Day is one of the world’s best-selling bands of all time, with more than 70 million records sold worldwide and 10 billion cumulative audio/visual streams. Their 1994 breakout album Dookie, which sold over 10 million and achieved diamond status, is widely credited with popularizing and reviving mainstream interest in punk rock, catapulting a career-long run of #1 hit singles. Entertainment Weekly calls Green Day, “The most influential band of their generation,” while Rolling Stone attests, “Green Day have inspired more young bands to start than any act this side of KISS, and that doesn’t seem to be changing.” In 2004, Green Day released the rock opera American Idiot which captured the nation’s attention, selling more than 7 million copies in the U.S. alone and taking home the Grammy Award for Best Rock Album. Mojo declared “It’s exhilarating stuff, the kind of record that sets new parameters as to what is possible from a punk rock’n’roll band in the 21st century.” In 2010, a stage adaptation of American Idiot debuted on Broadway to critical and commercial acclaim.  Released last year, Green Day’s thirteenth studio album Father Of All… (Reprise/Warner Records) debuted at #1 on Billboard’s Album Sales Chart and #1 in both the U.K. and Australia. Pitchfork declared, “Green Day’s most fetching and youthful songs in ages. The trio sounds reinvigorated, more like hungry newcomers staking their claim.” Green Day will also be headlining Life is Beautiful festival in 2020- click here for all dates.

Multi-platinum selling, Grammy-nominated Fall Out Boy most recently released the single “Dear Future Self (Hands Up)” ft. Wyclef Jean from their November 2019 record Greatest Hits: Believers Never Die – Volume Two. The song marked the band’s first new music since the August 2018 release of the three-song Lake Effect Kid EP, a love letter to their hometown city of Chicago that featured the full version of the band’s previously unreleased title track demo along with two new songs “City in A Garden” and “Super Fade.” In January 2019, Fall Out Boy was featured on the gold-certified track “I’ve Been Waiting,” a collaboration from Lil Peep and iLoveMakonnen. Fall Out Boy’s seventh studio album M A  N  I  A  debuted at #1 on the Billboard 200 in January 2018 and garnered a GRAMMY nomination for Best Rock Album. Their worldwide tour in support of the record included a hometown show at Wrigley Field. In January 2021, they performed at the We The People concert as part of the official 2021 Biden-Harris Inauguration.

Multi-platinum, GRAMMY award-winning band Weezer continues to be one of the most beloved and influential bands of the last twenty-five years.  The band has already had an amazing 2021 with the release of not one but two incredible albums: an orchestral pop record meditating on technology and disconnectedness called OK Human, and an homage to the band’s shared metal roots growing up called Van Weezer.  2021 will also see the band celebrating the 20th anniversary of Weezer (The Green Album) and the 25th anniversary of Pinkerton.  Weezer has sold 10 million albums in the U.S., and over 35 million records worldwide.  Their catalogue has included such megahits as “Buddy Holly,” “Undone (The Sweater Song),” “Say It Ain’t So,” “El Scorcho,” “Hash Pipe,” “Island In The Sun,” “Beverly Hills,” “Pork and Beans,” and more.   Following massively acclaimed album releases in 2016 and 2017 (Weezer [The White Album] and Pacific Daydream, respectively), and two sold out amphitheatre tours with Panic! At the Disco (in 2016) and Pixies (in 2018), Weezer released a fan-inspired cover of Toto’s “Africa.”  The cover propelled the band back into the charts across the board, and has since gone Platinum.  They then surprise dropped a covers album in 2019 — Weezer (The Teal Album) — which has been streamed over a hundred million times since its release.