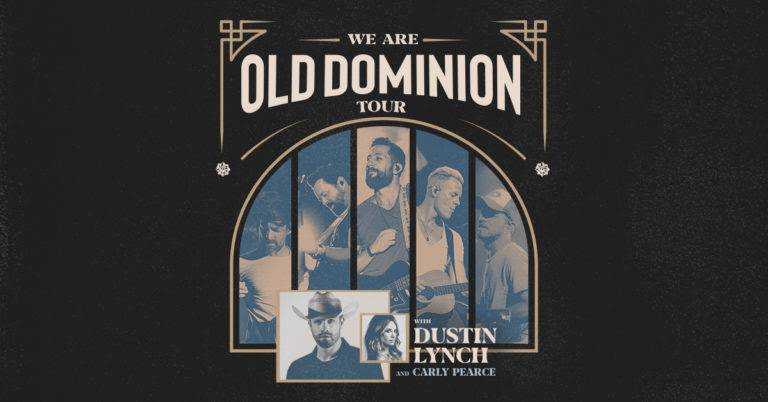 Dustin Lynch And Carly Pearce Set To Open On Select Cities Throughout U.S.

Set To Perform No. 1 Hit Single “One Man Band” On “The Tonight Show Starring Jimmy Fallon” On 1/20

Acclaimed 2-time CMA Group of the Year and 2-time ACM Group of the Year, Old Dominion announce U.S. leg of the “We Are Old Dominion Tour” kicking off in May. The tour will hit 13 cities with Dustin Lynch and Carly Pearce set to open on select dates. See routing below and click HERE for more info.

Old Dominion frontman Matthew Ramsey said, “We are so excited for this line up! We’ve had the pleasure of playing shows and making music with both Carly Pearce and Dustin Lynch for years now. Dustin brings the heat like no other, and it will be amazing to have a female act as strong as Carly out there with us!”

To close out 2019, Old Dominion gained another No. 1 hit single on the Billboard Country Airplay and Mediabase/Country Aircheck charts with “One Man Band.” With over 219 million streams, this marks the band’s eighth consecutive No. 1 and biggest song to date. They are set to perform the single on “The Tonight Show Starring Jimmy Fallon” on Monday, January 20.

The news of their eighth No. 1 single came on the heels of the band’s self-titled third album debuting at No. 1 on the Top Country Albums chart. The band co-produced the entirety of the album for the first time alongside longtime collaborator Shane McAnally.

Last month, the band also performed two special nights in Niagara Falls, ON at the Avalon Ballroom Theatre as “An Evening With Old Dominion, The Band Behind the Curtain.” During these shows, fans saw the band showcase a setlist of chart-topping hit songs they’ve penned that have been recorded by other artists, as well as the stories behind the songs. Watch it HERE.

Old Dominion will now make their return to Canada for the the Canadian leg of the “We Are Old Dominion” tour with Mitchell Tenpenny and Meghan Patrick set to kick off next month. This summer, the band will join Kenny Chesney on his Chillaxification 2020 stadium tour which will see them hitting stadiums across the nation as well as performances at several fairs and festivals throughout the summer.

ABOUT OLD DOMINION:  Old Dominion has emerged as one of the hottest breaking bands out of Nashville, fusing clever lyrics and an infectious sound. Their lyrical wit and hook heavy songwriting has certainly proved a winning method: since breaking onto the music scene in 2014, the band has notched eight No. 1 singles at country radio, surpassed one billion on-demand streams, earned several Platinum and Gold single certifications and are currently headlining arenas and amphitheaters around the globe. Old Dominion was recently recognized as the “Group of the Year” at the 2019 ACM Awards and the group was also notably named ACM “New Group of the Year,” ACCA “Breakthrough Group of the Year,” AIMP “Songwriter Artist of the Year” and Music Row “Breakthrough Artist of the Year” and in 2017 frontman Matthew Ramsey was ASCAP’s “Artist of the Year.” The band has also received nominations for CMT Awards, American Music Awards, Billboard Awards, and iHeart Radio. The band most recently received their second consecutive CMA “Vocal Group of the Year” trophy. Old Dominion consists of lead singer Matthew Ramsey, lead guitarist Brad Tursi, multi-instrumentalist Trevor Rosen, bassist Geoff Sprung and drummer Whit Sellers. Their melodic stunning self-titled third LP was released on October 25, 2019.

ABOUT CARLY PEARCE : Carly Pearce’s kind of Country transcends the moment. Fiercely rooted in the classics, the girl who left her Kentucky home and high school at 16 to take a job at Dollywood has grown into a woman who embraces the genre’s forward progression. Defying odds, her No. 1 debut “Every Little Thing” designated Carly as the highest charting solo female debut since July 2015 and one of only three women to accomplish the feat the last decade. Her PLATINUM-certified, blockbuster ballad steered a chart-topping trifecta on SiriusXM’s The Highway as “If My Name Was Whiskey” and “Hide The Wine” followed. Beyond her 2019 CMA Awards New Artist of the Year, iHeartRadio Music Awards Best New Country Artist, ACM Awards New Female Artist of the Year, CMT Music Awards Female Video of the Year nominations, the diversity of Carly’s connection saw her win CMT Music Awards’ Breakthrough Video of the Year and Radio Disney Music Award for The Freshest! – Radio Disney Country Best New Artist. A loyal advocate of Country music’s legacy and future, it’s no surprise an institution like the Grand Ole Opry has invited her for more than 75 performances since her debut while the Country Music Hall of Fame and Museum® partnered on “Unbroken Circle: Exploring Country Music History with Carly Pearce,” connecting the genre’s eras. Adding slots on major tours with Blake Shelton, Rascal Flatts, Luke Bryan and Jason Aldean, Carly has become “Country’s ‘it’ girl” (ABC Radio) while pursuit of her childhood dream. Her eagerly anticipated sophomore album, CARLY PEARCE, is slated for Valentine’s Day (2/14/20) on Big Machine Records with Rolling Stone, E! News, CMT and more already touting the release. Working again – and unknowingly, for the last time – with busbee, the pair maintained her roots and his contemporary sense. The down-to-earth female vocalist has quickly carved out her own highly honest, emotionally compelling place in a very Pop-Country world. Carly seeks to maintain the feel good without surrendering the get real, evident on “I Hope You’re Happy Now,” a now top 20-and-climbing duet with Lee Brice she penned alongside Luke Combs, Jonathan Singleton and Randy Montana. For tour dates and more, visit CarlyPearce.com.