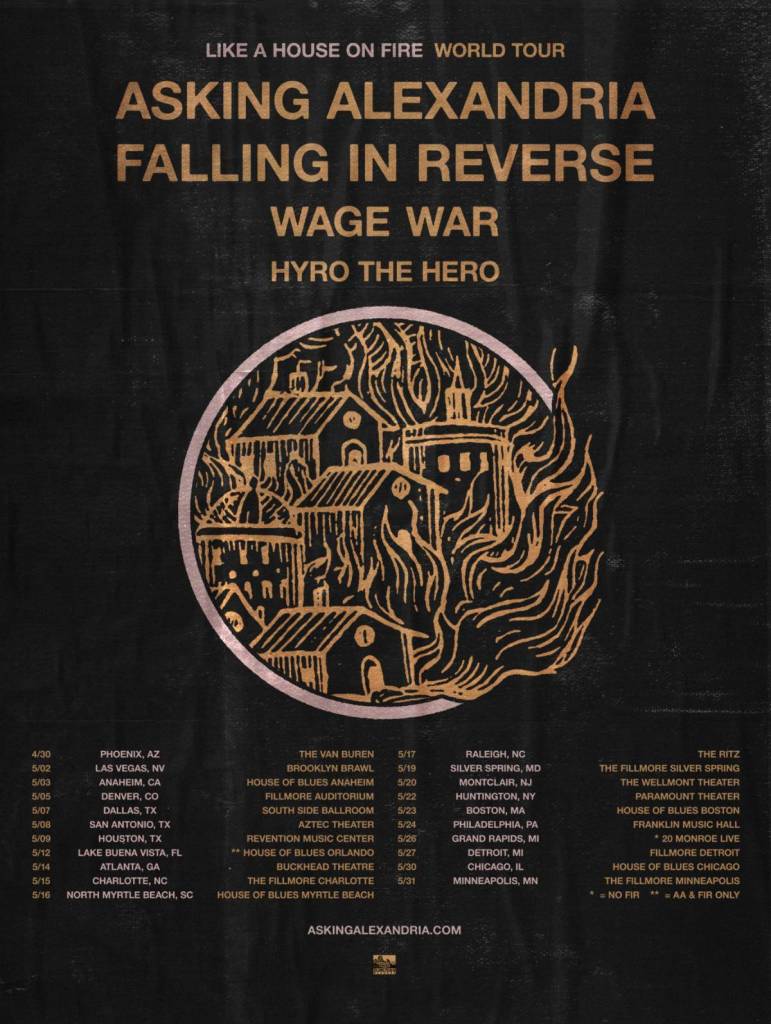 With Special Guests Falling In Reverse, Wage War and Hyro The Hero

Cosa Nostra (February 3, 2020) – Asking Alexandria, one of the most streamed, downloaded, watched and altogether listened to bands in a generation, have today announced the Like A House On Fire North American headline tour with special guests Falling In Reverse, Wage War, and Hyro The Hero. Tickets and VIP packages for the Like A House On Fire Tour go on sale Friday February 7th at 10 am local from AskingAlexandria.com

The Like A House On Fire Tour will be kicking off on Thursday, April 30th in Phoenix, AZ, the tour will hit a further 21 stops before culminating in Minneapolis, MN on Sunday, May 31st. Speaking on his band’s headline tour and the monster line-up, guitarist Ben Bruce says

“It’s been a while. In fact, it’s been far too long. We have supported some incredible bands over the last few years. We have seen countless faces and countless cities. But now….NOW….it’s our turn. We are f*cking back. Bigger and better than ever. Our first headline tour in over two years. We have worked tirelessly to bring you the biggest show of our careers and a handful of the greatest modern bands that rock has to offer. We couldn’t be more excited. Everything up until this point was practice….this is it, this is the show we have been building towards. We will see you all there. Let’s light it up like a house on f*cking fire!

On December 27, 2019, Asking Alexandria released a deluxe version of their phenomenal self-titled album. The release, titled LP5 DLX, celebrates the 2nd anniversary of the release of the self-titled and features six bonus tracks. Previously unheard gems such as a full-band version of hit single ‘Vultures’, the original demo of ‘Rise Up’, a Hyro The Hero mash up of ‘Where Did It Go’ and a Dex Luthor remix of ‘Alone In A Room’ accompany the additions of the acoustic version of ‘Alone In A Room’ and the band’s rendition of ‘Perfect’ taken from their live session at Sirius XM.