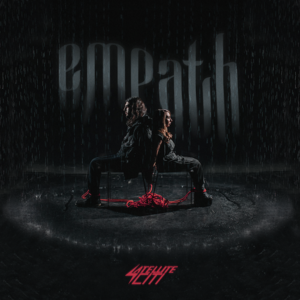 Friday, L.A.-based hard rock duo Satellite Citi premieres the acoustic video for new single “Empath” via MXDWN who says of the song, “Husband and wife hard-rock duo Satellite Citi are known for their hard-hitting riffs, but their new song ‘Empath’ shows the band’s ability to shift gears into a more introspective sound. … Expect to hear a lot from this dynamic, up-and-coming Los Angeles duo over the next few years.”
Like many of Satellite Citi’s songs that have a strong message woven throughout the lyrics and art, “Empath” is centered around the five stages of grief — Denial, Anger, Bargaining, Depression and Acceptance — and aims to help end the stigma surrounding mental health.
See the acoustic video for “Empath” HERE.
Get the track at Bandcamp HERE.
The band, featuring drummer/vocalist Anna Gevorkian and guitarist Shaunt Sulahian, say of the video, which features many of their family and friends: “We thought it was important to create a symbolic visual representation in our video, as the world is slowly crawling out of one of the darkest periods in modern history and there’s a responsibility that individuals have to be proactive and seek help when they are in a bad mental state. We want to join the fight to end the stigma surrounding various mental illnesses that affect so many people.”
Satellite Citi has also released an exclusive new “Empath” T-shirt with proceeds benefitting NAMI (National Alliance on Mental Illness). It features original artwork by Jaime Valderrama. Entitled “CHAMELEON,” it’s based on the subject of mental health and the struggles he’s overcome. The T-shirt can be purchased HERE.
Gevorkian and Sulahian are both Armenian-Americans born and raised in Los Angeles. They first launched Satellite Citi in 2015 with the eloquent track “Rock Bottom” to commemorate the 100th anniversary of the Armenian Genocide. In late 2020, they returned to that important topic with the powerful song “Antibody”, featuring Crobot’s Brandon Yeagley, that premiered on Loudwire. It was dedicated to the people of Armenia and aimed to bring awareness to the latest attacks on the country beginning in late September 2020 that killed hundreds of innocent civilians and displaced thousands more. 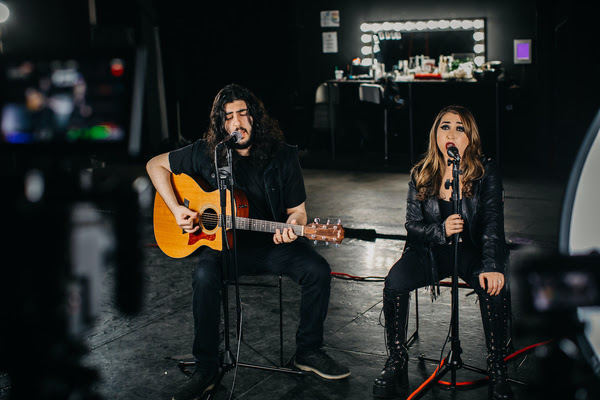 Both “Antibody” and the original version of “Empath” are singles from Satellite Citi’s upcoming fall 2021 album Fear Tactics, which is produced by the lauded Brad Wood (Smashing Pumpkins, Placebo, Liz Phair, Touche Amore) and features a wide range of inspiration from Black Sabbath to Muse to Halestorm. Previous singles have included “Black Magic,” “Miscommunication” and “Getaway.”
As a follow-up to their acclaimed 2018 debut EP Negative Space, the new album will thematically center around the importance of mental health and represents the band’s own struggles of coping with fear and anxiety, that are even more permeated in today’s culture. As Huffington Post has declared of the band’s important messaging in their songs, which have also included songs devoted to LGBTQ+ youth, “Satellite Citi are on the road to delivering audiences with music that tackles important issues that our society is facing today.”
A regular fixture on the stages in their hometown of Los Angeles, Satellite Citi is joined live by two anonymous Spacewalkers on bass and guitar that further taps into the band’s curiosity of other realms and advanced life forms. The band’s name, in fact, is based off of the idea of a city, outside of our galaxy, where people communicate with their minds.
In addition to music, Anna and Shaunt love video games and writing—they are currently working on their first original sci-fi graphic novel called Spacewalker with former DC editor Jim Higgins, that will coincide with a new concept EP in 2022. Satellite Citi also has five songs featured in the recently released rock documentary Long Live Rock…Celebrate The Chaos, directed by Jonathan McHugh, that features bands such as Metallica, Korn, Slipknot, and Rob Zombie. The trailer can be viewed HERE. As well the band’s song “Getaway” is featured in the new show “The Freak Brothers.”
Find Satellite Citi Online
Official Website: www.satelliteciti.com
Facebook: www.facebook.com/satelliteciti
YouTube: https://www.youtube.com/SatelliteCiti
Instagram: www.instagram.com/satelliteciti
Twitter: www.twitter.com/satelliteciti
Spotify: https://open.spotify.com/artist/4laO1AzROVryZq7KcHnDfL?si=w8EQQITFTmCXRVaPyNUjHQ