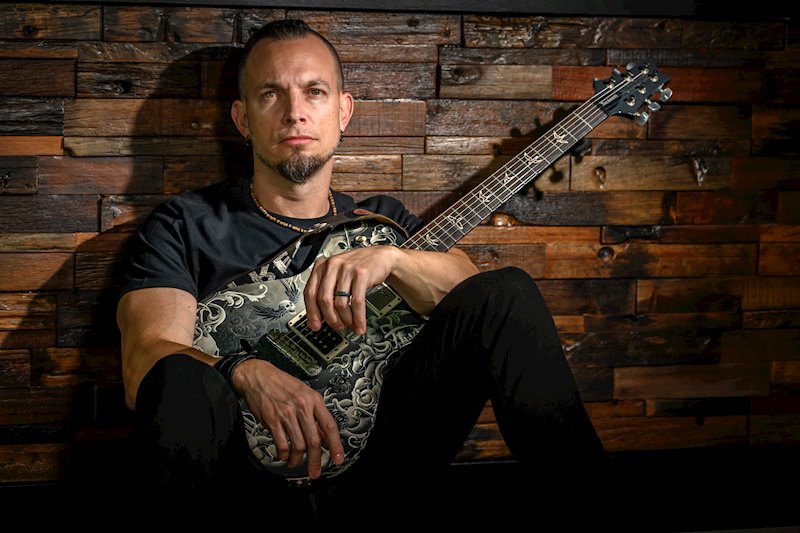 He’s Back! Mark Tremonti guitarist extraordinaire for Alter Bridge and leader of his own band Tremonti has released his fifth and latest effort Marching In Time.  Due to arrive on September 24th via Napalm Records this twelve-track effort is in many ways the equal of anything he has brought forth to the world.  With his success in his former band Creed and his current band Alter Bridge, he has definitely earned his spot in the pantheon of guitar gods. But it is through his solo work with his band Tremonti that he has shown just how good a songwriter he truly is.

The album kicks off with “A World Away”.  If there is a way to start a Tremonti album, this is it. Hard driving and heavy, yet still maintaining a melodic side. drummer Ryan Bennet and bassist Tanner Keegan lend a lot of thump to the opening of this song and their perfect pace really allow Tremonti to weave sonic magic with his guitar.  “If Not For You” in many ways is the perfect synopsis of the evolution of Tremonti as a whole, heavy yet melodic with exceptional musicianship.  Enough can’t be said about how through each successive album Mark’s singing has matured. With this album being some of his finest vocals to date.

Every album has some hidden jewels in it and Marching In Time has its share as well.  One standout in that category is “Let That Be Us”. Musically it is a gem. Tremonti’s rapid fire riffs are equally matched by Ryan Bennet’s drum work.  Along with a catchy chorus and a great breakdown this is one song that you will hit repeat on. “Bleak” is also in the same vein of this category. While the feel and subject matter is heavy, it is so well written and performed you can’t help but enjoy it.  “Under The Sun” is chock full of deft touches from the song writing all the way to the production.  Sonically they have managed to craft an incredible track with contrasting dynamics. It’s no mean feat to manage to weave together a song with the ambiance of a ballad along with the heavy rock sound that Tremonti is known for.

As Marching In Time has an overall tempo that rises and falls effortlessly almost as if it is a living entity, there has to be some quieter moments to counterbalance the heaviness. The first track that fits this mold is “The Last One Of Us”.  Starting with clean guitars and Marks earnest vocals throughout this is a perfect change up to much some of the heavier tracks and helps to countervail things. Along those very same lines, “Not Afraid To Lose” fits the form as well. This is one of the most commercial and accessible songs on the album.

When it comes to ending an album, there is an art to it. You have to find the right song to wrap things up neatly. It needs to sum things up much like a well written story. Whether it’s a concept album that needs to come to a conclusion, or a regular album that has a final song that leaves the listener satisfied, the final song is equally important. “Marching In Time” the first single, is about an epic an ending as one could ask for.  With hints of progressive rock tied into what Tremonti does best, create hard hitting guitar work along side supremely crafted songs.  The timeliness of this song can’t be overstated. Telling the story of a father raising a son during a pandemic and preparing him for the uncertainty to come. With the recent addition of a son to Mark Tremonti’s life this song certainly had to come from a deeply personal space which only lends too how powerful it is.

While Marching In Time is not like his previous effort A Dying Machine, that is a good thing. Instead of going back to the concept album well, he created an album in the fashion of many of the most beloved rock records. Not only is Marching In Time chock full of stellar songwriting and performances, along with an ebb and flow that is perfect. It glides seamlessly from track to track with each song holding equal weight in its story telling.  Whether you pick one song or listen to it in its entirety you will get plenty of everything you have come to know and love about Tremonti. After all, we are just living in Mark Tremonti’s world, and a damned good world it is.