On January 18th, Tiffany Williams debut EP, When You Go, was released. If you aren’t yet familiar with Tiffany, then you probably aren’t alone, but you’ll want to get yourself acquainted with this talented woman. Born in Kentucky, but now living in Nashville, this self-professed lexophile (that’s a lover of words for those of you that don’t know) is also an award-winning fiction writer. Although I pride myself on being on top of a lot of new music that’s being released, I must confess that I hadn’t heard of this talented singer/songwriter until this past week. A few seconds into one of her songs and I was immediately drawn to her voice.  I was struck with how pure Tiffany’s voice is. It’s not something overproduced or trying to be something it’s not, which is exactly how I would describe her album. 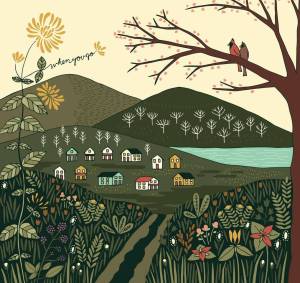 The five songs that make up the album are written from basic human experiences and Tiffany’s summary of these songs is perfect. “These songs are about the fallout of love and loss, the need and hope for the balm of companionship against the mystery of existence, and loving and longing for a complicated life and place you know you have to leave.”  If you’re looking for five songs to give you the warm and fuzzies then you’ve come to the wrong place. These aren’t songs filled with fluff and meaningless lyrics, these are songs about real life. About pain, about death, human nature and growing up in Appalachia.

If I didn’t already know that Tiffany was a gifted writer, I’d seriously wonder if she should be one after listening to her album.  Listening to the song, “The Waiting”, I was struck by her description of our time here on Earth and I think it might one of my favorite descriptions of how life passes us by so quickly, second only to the Youngbloods lyrics, “We are but a moments sunlight, fading in the grass”.  Tiffany describes it as, “Our time here lingers like a morning fog…then it’s gone…But still the days drag on…We could spend the endless hours sitting close…Then Maybe We Won’t…Mind the Waiting.”

The final song on the album, “When I’m Gone”, is the one I can relate to the most. It’s a song detailing everything that should be done after she passes on. The lyrics, “When I’m gone, throw out all the things you know will hurt my momma…the fifth of bourbon and the marijuana…and the pictures we took when we were down in Mexico…and all the words I wrote”, were like listening to my own instructions to friends after I pass on. It’s always a strange feeling to hear something in a song that you can relate so strongly to and almost feel like you wrote it, but instead it was a complete stranger that penned those words. That’s what being a good songwriter is about and that’s why this album has struck such a chord with me. Because it’s a real, raw and relatable piece of work.

If you’re looking for some new music to download or stream, look no further than When You Go.  I think you’ll find it worth the listen and at the very least, you’ll get to listen to Tiffany’s incredible voice.