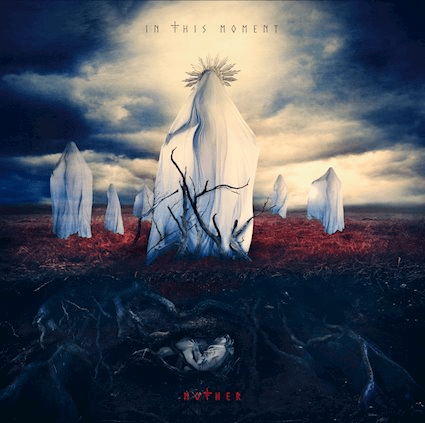 Goth/industrial rockers In This Moment have built a diehard following with their ethereal and intense performances. Since their inception in 2005, founder and lead singer Maria Brink and co-founder Chris Howorth the lead guitarist along with the rest of the band have created some of the most impactful music in their genre. On March 27th In This Moment will build on their legacy and release their seventh effort Mother.

Reteaming with Kevin Churko, of Five Finger Death Punch and Ozzy Osbourne fame, In This Moment have crafted a fourteen song effort that is a progression in their musical journey. With interludes, guest appearances, cover songs, and of course, their own haunting original materials they have created another masterpiece that builds on their catalog, while harkening back to their heavier days of Blood.
Starting thing off is the interlude aptly titled “The Beginning”. With Maria Brink starting things off whispering “I am the god and the devil around you. I am the hell and the heaven you crave” with ominous background music playing, in an instant you know exactly who this is, and you are along for the ride of your life. Smoothly, this translates into the first cover song of the album, the Steve Miller Band classic “Fly Like An Eagle”. With Kent Dimmel providing thunderous drum work that propels Maria Brinks vocals along, they have completely redefined this classic rock staple and turned it into a hypnotic industrial, heavy, masterpiece.

The fourth track of the album, “The In-Between”, is the first single off of Mother. Stylistically, it dovetails nicely between their other huge hits “Blood” and “Whore”. With Maria Brink alternatingly delivering the lyrics between a light as a feather breathy style, then flipping to a heavy distorted scream in a way that only she can, this song is sure to become an in demand staple of their live show.

When it comes to covering other bands material, it can be a tricky job. Go to obscure and no one will recognize it, go to big and you run the risk of suffering in comparison. For the other cover song on the album, In This Moment took the high risk/high reward route in choosing one of the most iconic rock songs of all time, Queen’s “We Will Rock You”. Helping out on this song is Lzzy Hale of Halestorm and Taylor Momsen of Pretty Reckless. With three of the fiercest female voices in rock today alongside guitarist Chris Howorth’s shredding, the risk they took in choosing this song paid off handsomely. They managed to stake a claim to this stadium anthem staple.

”Hunting grounds” is the other foray into a collaboration. This time, Maria teams up with Joe Cotela of Ded. The vocal interplay between the two works perfectly and the sultry tones of Ms. Brinks voice plays well with the urgent delivery by Joe Cotela. Lyrically, the interplay between the two is fabulous. This song fires on all cylinders and is definitely the sleeper hit on the album. Mother culminates with “Into Dust”. With the dulcet tones of a simple piano part accompanying Maria Brinks restrained voice, this song has a lullaby quality to it. Yet like everything else she writes, there is far more depth to this. It is an elegant ending to this musical journey that In This Moment has crafted.

With this latest effort that In This Moment has created, they have deftly walked a tightrope of pushing their boundaries, while staying true to their roots. With some of their most hard rocking moments since Blood it is sure to satisfy their fans. As In This Moments is known for their otherworldly performances, Mother will give birth to a whole new level performances that will delight all who listen to or see them live.

Track Listing:
1-The Beginning (Interlude)
2-Fly Like An Eagle
3-The Red Crusade (Interlude)
4-The In-Between
5-Legacy
6-We Will Rock You (feat. Lzzy Hale and Taylor Momsen)
7-Mother
8-As Above So Below
9-Born In Flames
10-God Is She
11-Holy Man
12-Hunting Grounds (feat. Joe Cotela of Ded)
13-Lay Me Down
14-Into Dust