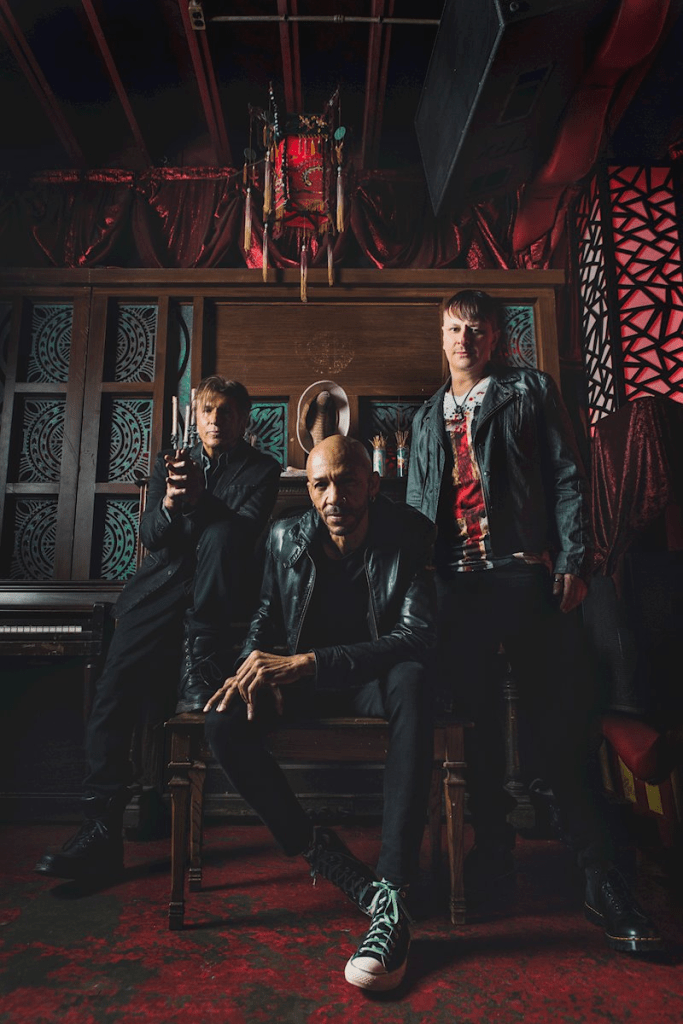 On September 13th KXM released their third album Circle Of Dolls. For those that aren’t familiar KXM is made up of Ray Luzier the drummer from Korn, George Lynch the guitarist from Lynch Mob and Dokken, and Dug Pinnick the bassist and singer from Kings X, with the group’s name using a letter from each of their more famous groups name. When you get three musicians with the pedigree that they each have, you run the risk of everyone trying to play at the absolute best of their individual abilities, then the music suffers. Thankfully, along with their incredible musicianship comes a solid sense of songwriting and knowing when to lay back and when to charge ahead. Their latest thirteen song effort truly shows this.
Kicking things off is “War OF Words”, and this is definitely a charge ahead moment. This track kicks off the record with a bang. From George Lynch’s muscular guitar licks, to Ray Luzier’s massive double kick drum assault, to Dug Pinnick’s gritty vocals, this shows just how good they can be even when pushing themselves hard. Things move seamlessly into the next track “Mind Warp”, which has a completely different vibe to it. Instead of the hard hitting, pedal to metal in your face style of the opening track, this one has ebb and flow to it and takes you on a five minute trip you wish wouldn’t end. Next up is the title track “Circle Of Dolls”. This song that showcases yet another facet of this band, with its more groove oriented feel. “Lightning” is a slower song that allows singer Dug Pinnick to flex his muscles, and what a job he does showcasing his amazing vocals. George Lynch also has a great solo on this track that fits the feel of the song perfectly. If there is one song on this album that has probably George Lynch’s finest solo, it would be “Time Flies”. Starting off with a catchy hook, this song has a mellow softer side that slowly builds throughout the song. When it it’s time for Lynch’s solo to kick in, it really is a burner! His work on this one is worthy of including it into some of his finest he has ever done. “Twice” is filled with great harmonies and Pinnick does a great job of delivering the vocals on this track. Ray Luzier’s drum work on “Vessel Of Destruction” is brilliant, infectious, and drives the song forward in only a way that he can. “Shadow Lover” shows how multifaceted a guitar player George lynch is. The song is driven along by his muscular riffs, then when it’s time for his solo he goes with a clean tone that lulls you into thinking this will be a mellow affair only to kick it into a blazing overdrive that only he can achieve. The final track of the album “The Border” is one of the slower numbers on the album. But don’t let the slow tempo fool you. As with anything that George Lynch does, you know there is going to be some great guitar work, and this song definitely delivers on that. This song is perfectly placed on the album and does a nice job in ending the journey that George Lynch, Dug Pinnick, and Ray Luzier have taken you on.
Circle Of Dolls is definitely a worthy inclusion into your music collection. There is plenty of hard rocking action that showcases the star studded lineup of this band. With great songwriting, and incredible musicianship that you would expect from these guys, this album will soon find its way into heavy rotation in your collection.