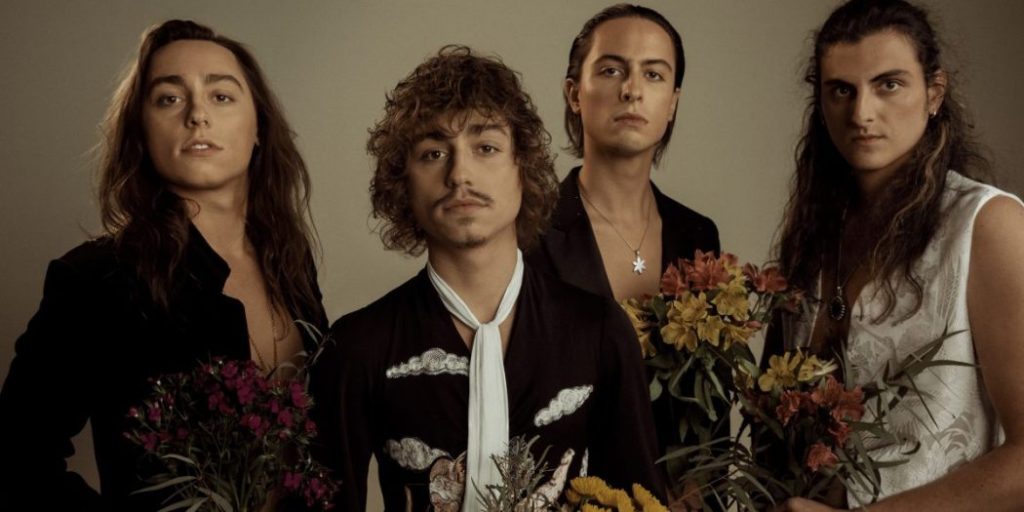 Three years after the release of their debut album ‘Anthem of the Peaceful Army’, Greta Van Fleet has put the finishing touches on their new record The Battle at Garden’s Gate (April 16th, 2021 on Lava/Republic Records) and it’s impressive in both scope and its attention to detail. Just as they changed the musical trajectory of modern rock with their 2017 debut single, “Highway Tune,” the Frankenmuth, Michigan band has charted a new course musically and lyrically that firmly establishes a path they can call their own in the rapidly changing hard rock genre.

GVF’s meteoric ascension to stardom has taken them from local bar-gigs in Michigan to arenas and stadiums around the world at a break-neck pace. Band members Josh Kiszka (vocals), Jake Kiszka (guitar), Sam Kiszka (bass/keyboards), and Danny Wagner (drums) seemingly came out of nowhere with a big, yet familiar sound that many music elitists felt would reinvigorate a fading guitar-centric rock sound. The Battle at Garden’s Gate foundation appears head-strong on re-establishing the power and passion that ruled the FM airwaves in the past while simultaneously allowing the songs that it encompasses to stand the test of time. For the albums development, the band enlisted high profile producer Greg Kurstin. Under his guidance, the new body of work encompasses many complex arrangements, multiple layers along with chord progressions that is eerily reminiscent of the prog-rock super-group era of the 70’s, but still retain the striking familiarity of Greta Van Fleets earlier studio work.

The Battle at Garden’s Gate, opens with “Heat Above,” a heavy progressive-leaning cut complete with a dramatic organ (think Hammond and Greg Allman) that serves as the first volley to the more mature multi-faceted arrangements that the band has undertaken for this album. Lead singer Josh Kiszka takes the listener on a cinematic journey as he sings, “Follow the fearsome sound / As they march to battle, hear the drums pound / We do not fight for war / But to save the lives of those who do so.” Astute listeners will undoubtedly hear similarities between Kiszka’s vocals and Geddy Lee from the legendary band Rush for the first time which subtly reinforces the prog-rock overtures throughout the 12-cut album

“My Way, Soon,” the albums first single, is a musical and lyrical descendent of GVF’s earlier work. The song features the familiar up tempo rhythms and vocal arrangements heard in the past along with the requisite searing guitar work of Jake Kiszka. The band takes things down a few notches with “Broken Bells,” a whimsical ballad that culminates with a ripping guitar solo along with lyrics that declare appropriately, “Not all the answers are the same. Yet we still play the game.”

“Stardust Chords,” starts out slow and steady before shifting gears into a full-throttle visceral, rock and roll assault. This song has it all, a twangy guitar and a pounding bass line all highlighted by Kiszka’s wailing vocals. “Light My Love” is the perfect follow up song as it has a similar structure, with a deep groove, rhythmic beat and the now unmistakeable Kiszka/ Lee vocal delivery. Conversely on “Tears of Rain” the song begins with an intricate acoustic guitar, before segueing into a piano-centric piece led by bassist/keyboardist Sam Kiszka. The addition of some well placed backing vocals and delicate guitar licks transforms this track into an emotional rollercoaster.

The album’s most intriguing elements are found on large-scale productions like “Built by Nations,” “Age of Machine” and epic “The Weight of Dreams.” These guitar forward tracks dive into themes of religion, environmentalism and corporate greed and allow the musical ability of each member to step out from the shadows of each other. “The Weight of Dreams” itself being a staggering nine minutes in length, has the chops and substance that could actually allow it to become Greta Van Fleets career defining signature anthem. Most performers at this early stage of their musical journey wouldn’t dream of releasing a song of this nature but as we’ve seen before, Greta Van Fleet refuses to follow the blueprint defined by today’s modern music landscape.

Throughout “The Battle at Garden’s Gate,” Greta Van Fleet have stuck to their retro-rock roots with a little progressive thrown into the mix and to be honest, that’s a good thing. After all, Greta Van Fleet is one of those rare bands that can triumphantly sound like a classic ’70s band while  still bringing a fresh, new perspective to their music at the same time.

The Battle at Garden’s Gate should please fans of Greta Van Fleet while bringing a few more along for the ride. Unfortunately for the casual fan, media outlets across North America and Europe have been quick to dub this album as Greta Van Fleet’s “prog-rock” LP, when in actuality it’s much more complex and diverse piece than that directive suggests. Yes, this in itself may alienate a select few boarderline fans, but these songs are expansive yet brilliantly structured and the influence for the conceptual arrangements hail from all aspects of rock n’ roll.  If you’ve ever seen the Greta Van Fleet live, you would fully understand that a full-length cinematic album isn’t that surprising for a band who does that on stage every night. “The Weight of Dreams” has been part of their live show since early 2019 and favorites like “Lover, Leaver, Taker, Believer” are often extended into 20-30 minute jams on stage. This album is a well orchestrated and a fine representative studio interpretation of their live show. If past live performances tell us anything, these new songs will translate beautifully on stage.