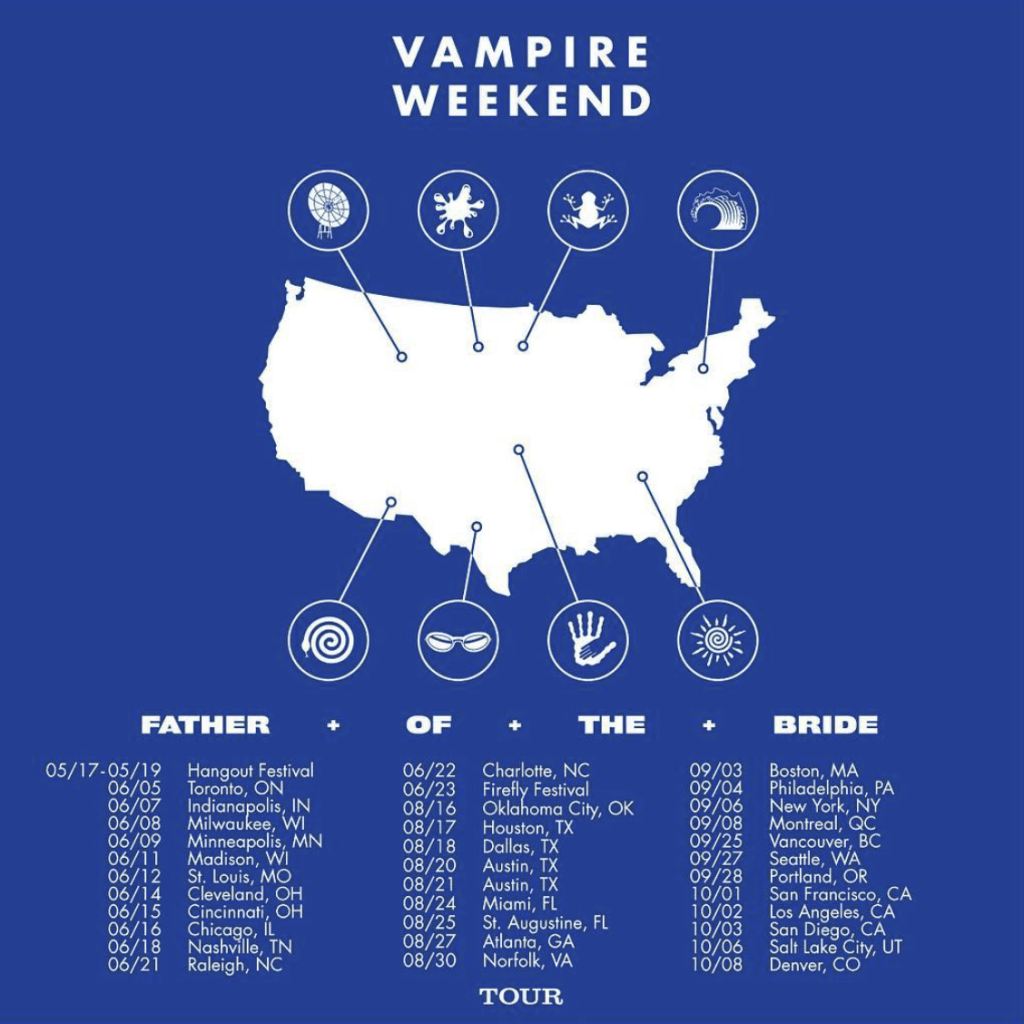 St. Louis, MO (June 12th, 2019) – Vampire Weekend’s Father of the Bride Tour brought a huge crowd to The Fabulous Fox Theater in St. Louis. Supporting them for the first handful of shows on the tour was Chicano Batman from June 5th to June 22nd. Both the bands brought their own special characteristics to the Fox and the two bands were a pairing you never knew you wanted. Despite the crowd being in two places with the Blues Stanley Cup game and the concert, both bands were able to keep the energy and focus on their sets.

The LA based band, Chicano Batman, took the stage first and they brought Latin psychedelic sounds as they opened with Cycles of Existential Rhyme. The band has an alternative, synthesized Latin sound that could be compared to a 70’s psychedelic sound. They formed in 2008 and include members Eduardo Arenas, Carlos Arevalo, Bardo Martinez, and Gabriel Villa.

The band played songs off of their Freedom Is Free and Cycles of Existential Rhyme albums, such as Jealousy, Flecha al sol, Friendship (Is a Small Boat in a Storm), and Magma. At one point in their set their drummer Gabriel even did his own drum solo and knocked it out of the water! The rest of the band members even squatted and watched with the crowd as Gabriel did his drum solo. Despite them having a very laidback and relaxed sound for the most part, Chicano Batman kept all the energy up. They even played one of their most known songs by fans, Black Lipstick. If there is any band to check out now on Spotify or in concert, it’s this band!

The New York based band released Father of the Bride on May 3rd of this year and it has been an absolute hit with the fans. It kept the same classic Vampire Weekend sound, high energy indie-rock. They played a hefty setlist of songs off of their albums Contra, Father of the Bride, Modern Vampire of the City, and Vampire Weekend. With the amount and variety of songs played, any fan was bound to hear their favorite!

They kept the night going as they played songs like Unbelievers,White Sky, This Life, and Step. They even covered Labi Siffre’s song, I Got The… and they executed it amazingly! Vampire Weekend performed an older hit, Horchata, and the venue was lifted. During this song the Blues, St. Louis’ hometown hockey team, won their first ever Stanley Cup! The spirits of the crowd seem to be lifted higher. Vampire Weekend continued to keep the spirits high as they played another song off the new album, Harmony Hall, and then classics like Cousins, A-Punk, and Oxford Comma. When their set came to an “end” they closed out with a new song, Jerusalem, New York, Berlin. But Vampire Weekend wasn’t done yet.

The band came back out for an encore, and they performed the Blues’ victory song, the Umberto Tozzi version of Gloria. They continued the encore with songs such as Big Blue, Finger Back, and audience requested songs Hannah Hunt and Sympathy. Vampire Weekend finally closed out an amazing and unforgettable night that was sure to leave fans with big smiles and excitement.

Between the amazing performances from both bands, Chicano Batman and Vampire Weekend, this tour is one for the books. If you happen to have the chance to catch the Father of the Bride Tour, just do it. You won’t regret seeing either of these bands live! Catch the rest of the tour dates here and see which bands will be supporting Vampire Weekend as they continue their tour through the fall.