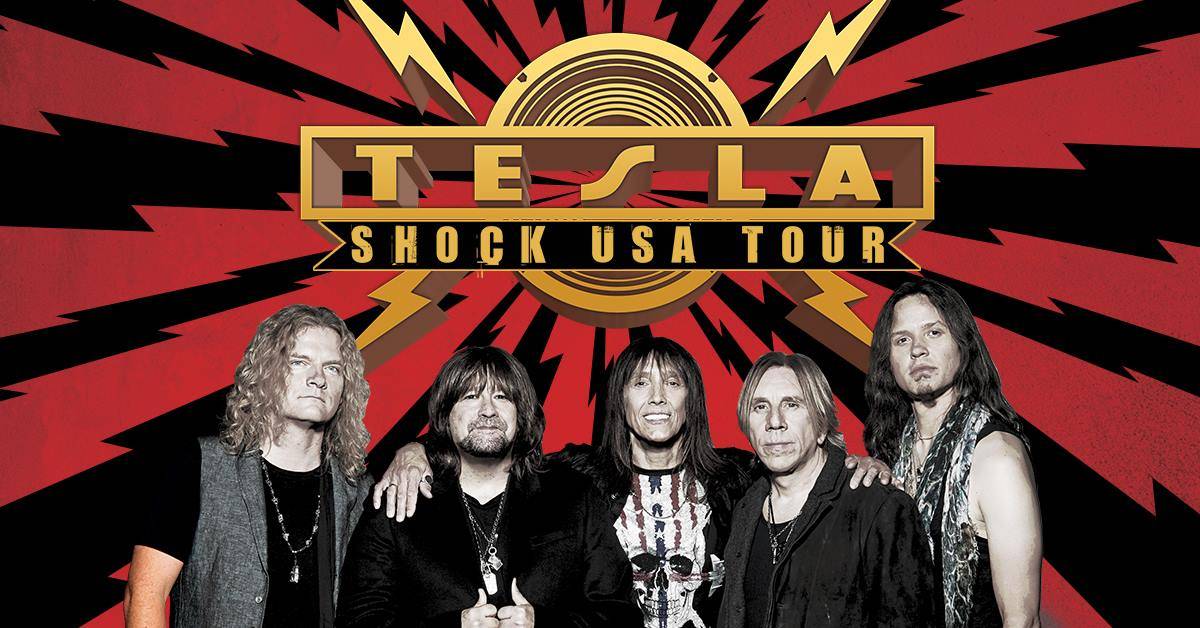 On a sunny warm Saturday in Orlando Florida, things were getting ready to heat up when the sun sets. This was going to happen because the House Of Blues was going to play host to Year Of The Locust and Tesla. With a hot young upstart band and arguably one of the best rock bands to come out of the eighties together on one tour, this had all the makings of a great night of music. Of course, with this being the thirtieth anniversary of Tesla’s iconic album The Great Radio Controversy, indeed this was going to be a special night.
For those that aren’t familiar with Year Of The Locust, they are a straight up hard rocking band based out of Long Island, NY. With a full length album, an EP and another EP on the way these guys are really beginning to get into a tight groove as a band. Made up of Scott McGiveron on vocals, Fred Serrell the bassist, Tyler “The Outlaw” Hensley on guitars, Dusty Winterrowd on guitars, and at tonight’s show Billy Grey filling in for Cody Hyde on guitars. With only thirty minutes on stage to work with, the band had to make sure they didn’t waste a second of it. From the moment they got on stage they weren’t going to waste any of that precious time. It was obvious that the sold out crowd were catching a great new act and were loving every minute of it. Singer Scott McGiveron worked the stage like a seasoned pro. Guitarist Billy Grey, taking a break from his duties in Fozzy, did an amazing job filling in and sounded like he’s been a part of the band since day one. By the time their set was over, the crowd was buzzing about how good the band was. Indeed, this is a band to keep an eye on and watch them earn their success.

One of the bands that has withstood the test of time is Tesla. With over 37 years of experience together as a band, not only have they released songs that seemingly everyone knows but they also show no signs of backing off. When the stage lights came on Guitarist Frank Hannon came out playing the opening playing the intro to “Cumin’ Atcha Live” and was his playing was on fire! When the rest of the band came out to join him the crowd went nuts. What a perfect song to open a show with. With so many hit songs in their arsenal, you knew that no matter what song they played next all the fans would be singing along. Throughout the show Frank Hannon and fellow guitarist Dave Rude would trade solos thrilling everyone not only with their playing but their showmanship as well. The rest of their set was like a greatest hits record. It included songs like “Heaven’s Trail”, “Modern Day Cowboy”, and “Be A Man” among others. They closed out the night with their biggest hit, “Signs” which thrilled the sold out crowd.

What a great night of music from a band on the rise and a band clearly on top of their game. Year Of The Locust brought a ton of energy to the stage and was more than up to the task of sharing the stage with established veterans Tesla. Tesla showed everyone that was able to make it to the show why they are such a great band. Between great songwriting and top notch playing by the band, they are still an act that must be seen live to truly appreciate. While this was the last night of the tour with these bands together, both bands are worth seeing individually and if they ever join up again make sure you mark your calendar for that date.

Year Of The Locust: