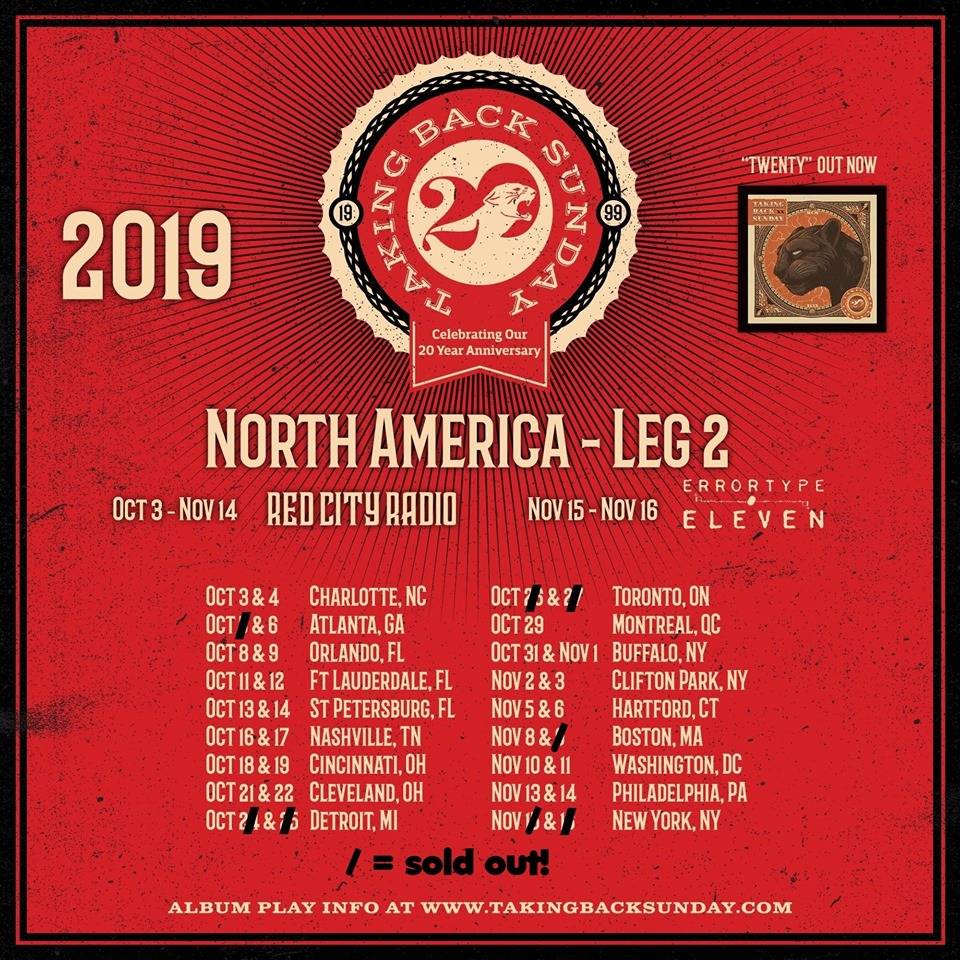 Charlotte, North Carolina (October 3, 2019) – This year, Taking Back Sunday have been celebrating their 20th anniversary as a band. In January, they released Twenty which celebrates that career and it includes 19 cuts from their 7 studio albums, as well as 2 new tracks. Touring the globe throughout 2019, Taking Back Sunday have been thrilling fans by playing their entire debut album, 2002’s Tell All Your Friends along with hits that span their entire catalog.

Tonight’s stop at The Fillmore in Charlotte, North Carolina, kicked off the last leg of their 20th Anniversary tour and they have decided to change things up a bit!

First off, they are starting this last leg in Charlotte where guitarist, John Nolan and vocalist, Adam Lazzara have lived for many years. Both have played and attended countless shows here, even recording 2016’s Tidal Wave right in the city. There is also a very rare October heat wave today with temps hitting 97 in Charlotte with excessive humidity making condition almost unbearable. Are these local fans concerned? Not one bit. Fans still lined up down the block waiting to get into this show hours in advance!

Once inside the packed Fillmore, the buzz of excitement is unreal. Red City Radio has the honor of opening up this leg of the tour each night. They hit the stage right on time and somehow managed to bring even more heat. These guys rock! They gave everything during their 45 minute set, sampling most of their catalog to date. Red City Radio covered an amazing version of their most recent single, “Love A Liar,” along with “Rebels” and “I’ll Still Be Around,” off of their 2018 EP, including the set ending “In The Shadows”. This a great live band, one I’ll be checking out again!

Next up, is exactly who we’ve been waiting for. It’s time for Taking Back Sunday to hit the stage. But did I mention they’re changing things up starting tonight? Absolutely! For the remainder of the tour, they’re playing not 1, but 2 shows in every city. Fans get a double taste of their favorite bands.

They are still covering their debut Tell All Your Friends in it’s entirety but now also throwing in a 2nd album! They will decide by flipping a coin. (Right? I just said that. Flipping a coin!). One side of the coin will be 2004’s Where You Want To Be while the other has 2006’s  Louder Now. Whichever album they don’t play on night 1 they will just play that on night 2. Absolutely worth going to both shows, if you can manage some tickets. (Make it quick, a slew of dates have already sold out!)

Tonight Taking Back Sunday kicked it straight into gear playing “You Know How I Do” off their debut LP. As they worked through covering both sides of the LP Tell All Your Friends, band members treated fans to stories about each track. They told where the inspiration came from, how they named certain tracks along with where they were when writing each song.

After playing the final track, “Head Club” off their debut – Vocalist, Adam Lazzara, invited his sons as well as his nieces and nephews on stage with them. Adam showed the crowd the special coin which the band uses each date to decide which album to play next. Fans were cheering and even started chanting which album they wanted to hear while Adam’s eldest son flipped the coin. When they announced it had landed on 2004’s Where You Want To Be they were met with a deafening  roar from fans that filled the sold out venue..

After the kids had exited the stage, Taking Back Sunday started off with “Set Phasers to Stun” then methodically worked through both sides of Where You Want To Be in entirety.  Once done, they threw in a few bonus tracks playing 2016’s  “Tidal Wave” as well as 2006’s “What’s It Feel Like To Be A Ghost?” finally finishing their big two hour set with fan favorite “Make Damn Sure”.

Great show, start to finish. This current tour will be going through mid November and dates with locations can be found at takingbacksunday.com