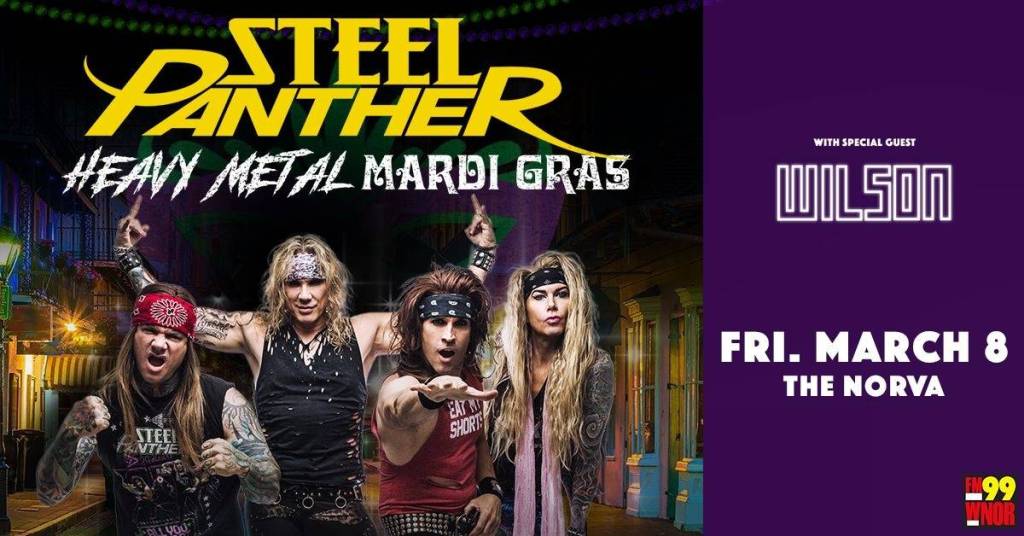 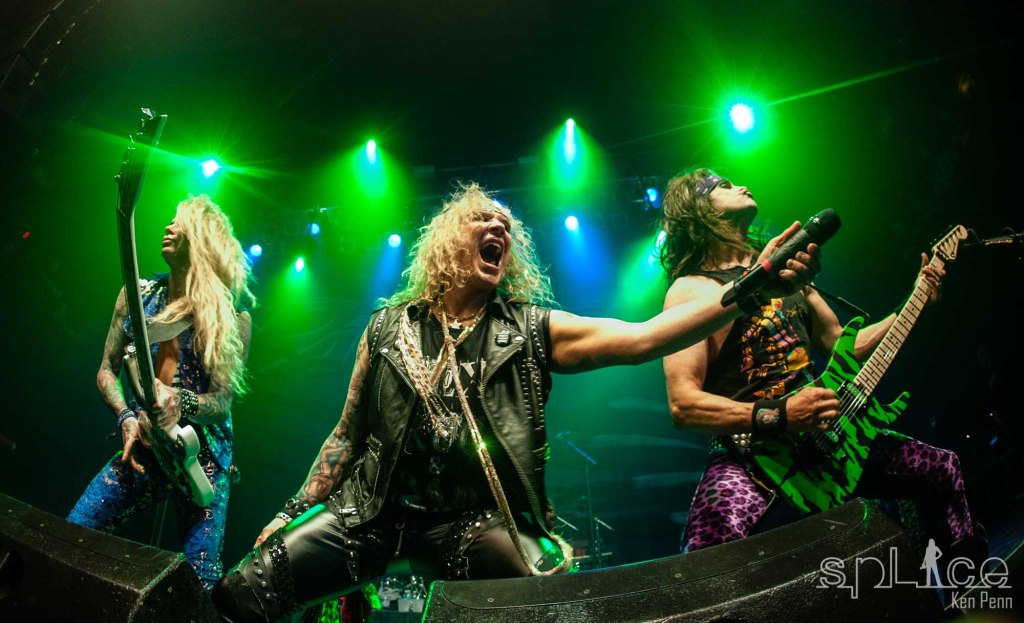 Norfolk, Virginia (June 1, 2019) – Steel Panther’s Heavy Metal Mardi Gras! Tour blasts into The Norva concert venue tonight supported by rock bands Wilson of East Lansing, Michigan and True Villains of Nashville, Tennessee. The over the top glam metal 4 piece from Los Angeles, California, is bringing their ultra rockstar personas to this room full of stoked fans. Some of which are dressed in 80’s metal outfits fully equipped with wigs and other metal accessories. 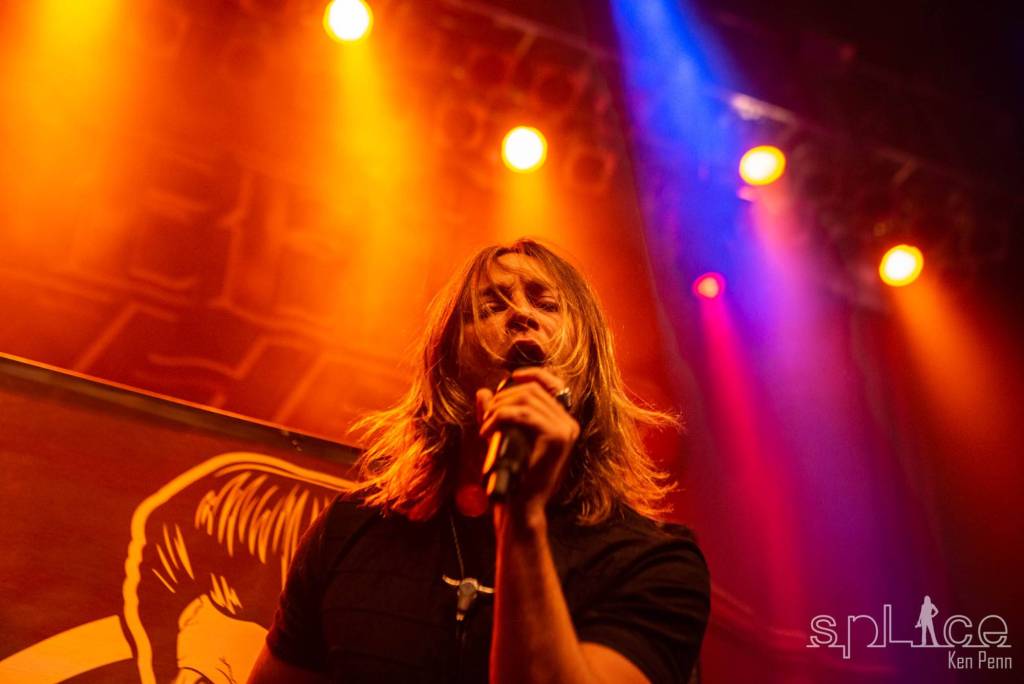 True Villains takes to the stage first. This band plays hard rock and roll filled with the energy of metal’s past while striking their own chord in todays musical landscape.  The members consist of Tim Venerosa on guitar, Matt Carter playing drums, Barry Conaway on bass, and lead singer Beau Lastavich. This tight band has a deep grooving stage presence that gets the crowd moving. Bassist Barry Conaway’s energy drives the bands power as they play through the set. The crowd is loving it as Beau interacts and slings the microphone stand around as he sings. The crowd erupts as the band announces they are about to play a cover song. The song is the 1986 hit “Take Me Home Tonight” by American rock singer Eddie Money.

The entire club is singing along as the chorus hits,

Tru Villains puts you in the mood to rock with a live an energetic show. Check them out on tour here: https://www.truevillainsnashville.com/shows 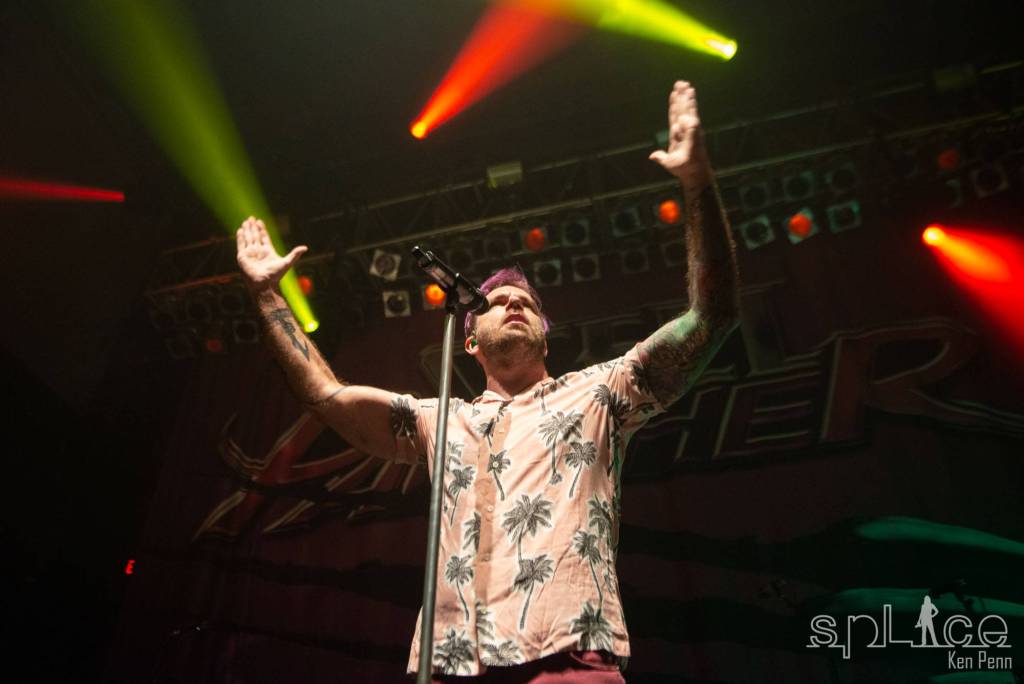 After a brief stage reset Wilson is about to take the stage. The drum set is placed stage right and I see a large neon green set of skeleton hands forming a “W” on top of the bass cabinets. This five piece is comprised of Chad Nicefield on vocals, Jason Spencer on lead guitar, Kyle Landry on guitar, James Lascu on bass and Matt Puhy hitting the drums.

Nicefield is all smiles as he navigates the stage belting out their hip hop influenced hard hitting rock and roll. The band is having fun and they are doing their all to keep the crowd having fun as well. The fans react to the song “Dumptruck”, a powerful song with ripping guitar riffs accompanied with pounding drums reminiscent of Rob Zombie-escue power.

Chad says “Anybody wanna stroke with us?” as they transition into “The Stroke” a Billy Squier cover. The drums kick in and the entire place sings:

“Now everybody, have you heard, if you’re in the game
Then the stroke’s the word
Don’t take no rhythm,
Don’t take no style
Gotta thirst for killin’,
Grab your vial uh”

The set rocks with Wilson‘s unique arrangement of songs peppered with hip hop flavored moments that keep the crowd hopping. Nicefield takes his time to shake hands with fans as will as photographers in the photo pit. At one point he states how in the past they had played Norfolk ‘s small bars and clubs and he couldn’t believe how they are now on this tour and doing what they love. He thanks Steel Panther for bringing them along, then thanks the crowd for coming out and says he hopes they are able to come back again in the future with their own headlining show.

The lights drop and some heavy intro music begins to play as Steel Panther enters stage right. The first song is a cover, “Everybody Wants Some!!” by Van Halen. This is perfect because when you see Steel Panther you are brought back to the 80’s hair metal dynasty of bands like Van Halen, Def Leppard etc. There are high pitched metal screams echoing throughout The NorVA as the bands flamboyant performance romances the crowd.

The music has flashed the entire crowd back to the hairsprayed glory of the old days as the band travels back and forth across the stage in front of a giant purplish red lit Steel Panther backdrop.

In the crowd I see a fan holding a large handmade sign with the message “Michael Starr’s Love Child” with an arrow pointing down.

The sarcastic, sex and drug laden lyrics are being sang by the band and crowd alike.

“She’s got the eyes of a Panther!”

I see multiple groups throwing up metal horns and screaming as Starr announces, “This one is brand new.” and they begin to play their song “Goin in the back door”.

The song ends and Michael says, ”Holy shit you guys f’n rule!” … “That was really good for a Tuesday night, but motherfr’s its Saturday f’n night in Norfolk Virginia”. …”Turn the lights on so I can see their faces right now!”

The lights come on and he continues,

“We are gonna end that song one more f’n time and you’re gonna put your hands in the air just like this!”

As he raises both arms in the air he points to a young lady in the crowd and says , “And YOU, you’re gonna do your plastic surgeon proud and show your chest to everyone in here!”, and the crowd screams.

Then as if on queue the lady lifts her shirt up and flashes her chest for the whole Norva to see as the place goes wild.

Satchel then says, “Give her a backstage pass right now! You are setting the tone for the evening ma’am”. Then he points to the man below her,… “And you sir, thank you for putting your daughter on your shoulders.” And the crowd bursts out in laughter.

They replay the end of the songs and the crowd erupts again.

Bassist Lexxi Foxx checks his hair in a hand held mirror from time to time, puckering his lips and spraying hairspray between songs.

Starr asks, “How many of you have seen Steel Panther before? … raise your hands”, and about 80 percent of the crowd raises their hands.

Then he asks, “Who is never gonna see us again after the first two songs?, and a guy jokingly raises his hand in the front row. Satchel replies, “Oh of course, the guy with the Greta Van Fleet shirt”, yea sure!” they laugh, and the crowd laughs as he continues to mock them.

Michael plays to the crowd with finesse. “You guys are in for a great f’n show because this is our favorite city to rock in the whole f’n world!”

The crowd eats it up with applause.

Satchel introduces each band member with some hilarious comments about each, for instance he says,
“This guy is the standard for heavy metal vocalizing…but Vince Neil is not here tonight so here’s Michael Starr”.

Laughing, he then said, “When i found him he was having sex with two playboy bunnies and a German Shepherd at the same time”.

Starr interrupts, “Thats not entirely true. I just want you to know if you are a pet lover, nothing got in the dogs eyes.”

The stage banter is hilarious and travels between rocking out, doing lots of drugs and having lots of sex.

Satchel say’s, “Next up doing his best Farrah Fawcett impersonation, Mr. Lexxi Foxx the crowd screams. Lexxi informs, “Thanks Satchel, I just want to let you know we sold it out tonight, its a big deal”. Everyone claps and cheers.

A lady in the crowd yells, “I love you Lexxi!”

Next song is stated to be for a special guest in the audience. “This song is for our special guest. Mr. Tiger Woods is here everyone”. And the song “Just like tiger woods” begins.

The band chats about how they got massages earlier in the day from some Asian masseuses. They play their song Asian Hooker, as they brings two asian women on stage to dance and gyrate with them as they play.

Afterward, Starr jokes, “All Asians are not sisters but all asians are masseuses.”

Michael address the crowd again, “Honestly from the bottom of my heart, this is the best crowd we have had in the last two days.” and the crowd laughs.

Satchel says, “When Lexi doesn’t trim his pubic hair it looks like a mushroom in tall grass”. Lexxi responds, “That’s not information you are supposed to share a-hole!”.

The band is hilarious and their music rocks just like the 80’s genre they represent. From the long big hair to the metal AF outfits, you are going to get a blast of the 80’s you know and love when you see Steel Panther. Check them out at their next show here: https://www.steelpantherrocks.com/pages/tour

Setlist:
Everybody Wants Some!! (Van Halen song)
Eyes of a Panther
Goin’ in the Backdoor
Just Like Tiger Woods
Party Like Tomorrow Is the End of the World
Asian Hooker
Poontang Boomerang
Crazy Train (Ozzy Osbourne cover)
Guitar Solo
Stripper Girl
Girl From Oklahoma
17 Girls in a Row
Gloryhole
Community Property
Death to All but Metal
Encore: Party All Day (F*ck All Night)