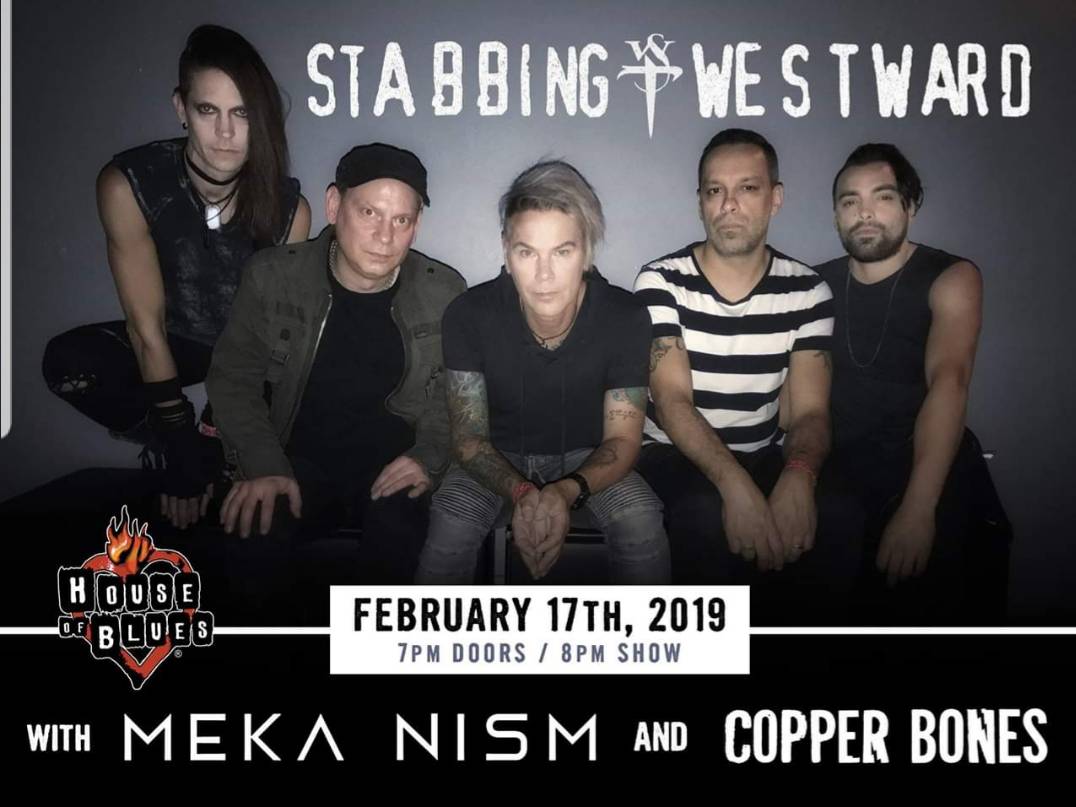 On a weekend with picture perfect weather, what better way to cap it off then to see a great concert. On Sunday February 17th The House Of Blues in Orlando Fl. played host to the perfect way to end the weekend with a performance by Industrial rock band Stabbing Westward, and local fan favorites Meka Nism and Copper Bones. With this being the 20th anniversary of Stabbing Westwards album Darkest Days, the band decided to tour behind this album. So, fans were definitely in for a treat tonight.
Based out of Orlando Fl. Copper Bones is a duo made up of Ryan Fleming on bass and vocals, and Greg Blachstein on drums. If you were to close your eyes and listen to them, you would swear that there were more people on stage. Ryan Flemings bass playing is outstanding. At times you aren’t sure whether he is playing a bass, a guitar, or both at the same time. Of course, Greg Blachsteins drumming compliments Ryan’s bass work very well. When they hit the stage, the venue already had a big crowd as not only was this a Stabbing Westward, but both Copper Bones and Meka Nism are very popular local bands and no one wanted to miss a note. They opened their set with “1000 Years” from their debut album Exhibit A. Of course, the crowd loved it. Throughout their time on stage they continued to play a great set. Everyone loved how just those two guys sounded like there were more people in the band. The rest of the 7 song set was made up of material from their debut album.

One of the hottest bands that Orlando Fl. has produced, Meka Nism, was up next. Fronted by Ms. Meka, this hard rocking quintet is also made up of Bobby Keller on guitars, fellow guitarist Danny Arrieta, Bassist Jarret Robinson, and drummer Nick Colvin. With their fierce performances and trademark face paint, they have deservedly built up a rabid fan base. For sure They had many fans at The House Of Blues that night as you could see lots of their t-shirts on fans in the packed audience. When they hit the stage, their fans gave them plenty of love by cheering very loudly. With fiery red dreadlocks and face paint, Ms. Meka’s magnetism was in full display right from the get-go. You can’t help but be drawn into her performance; everyone in the building was locked in on her. Playing an entirely too short set for the crowd’s taste, they made the most of their stage time. When it was time for guitarist Bobby Keller to hit his solos, he pulled out all the stops wowing everyone there. Their set was made up of songs from their latest EP The War Inside.

Back in 1986 Christopher Hall and Walter Flakus formed Stabbing Westward. They had their first gold record with Wither Burn Peel in 1996. They followed that up with arguably their biggest release Darkest Days in 1998.I In honor of this being the 20th anniversary of that album the focus of the tour would be in celebration of this album. They kicked off the night with the title track of Darkest Days. Walter Flakus’s edgy synth work sounded just as urgent and powerful today as it was when it first hit the scene. Guitarist Mark Eliopolus’s playing was a very cool contrast to Flakus’s synth work and the sound they created had their fans in a frenzy. When Christopher Hall hit the first note it sounded perfect. Throughout the show he would crouch down at the edge of the stage and lean into the packed crowd, making things not only more intimate, but more powerful as well. When it came time to play their biggest hit “Save Yourself” the level of passion they all threw into the performance had everyone mesmerized. While their music may have a dark edge to it, the guys were clearly having a great time. At one point during the show a mosh pit broke out and Chris was surprised and said it was a Disney mosh pit, referencing the fact The House Of Blues Orlando is in Downtown Disney. When he spotted a kid in the crowd, he found out that not only was this his first concert, but also his birthday. So, he stopped the show and had the entire place sing him happy birthday. The rest of the night they continued to wow the enthusiastic crowd with a flawless performance. When they were playing another of their hit songs “What Do I Have To Do” you could see Christopher Hall smiling because everyone in the place was singing along with him word for word.

What a great night everyone in attendance had. From especially one lucky kid to the rest of the audience, it was a memorable night for sure. To get to hear one of the great industrial rock albums of the 90’s played to perfection, to hearing some exciting new music from top local bands, this was a night sure to please rock music lovers that got into the show. If you find out that any of these bands are on tour, make the time to go see them.