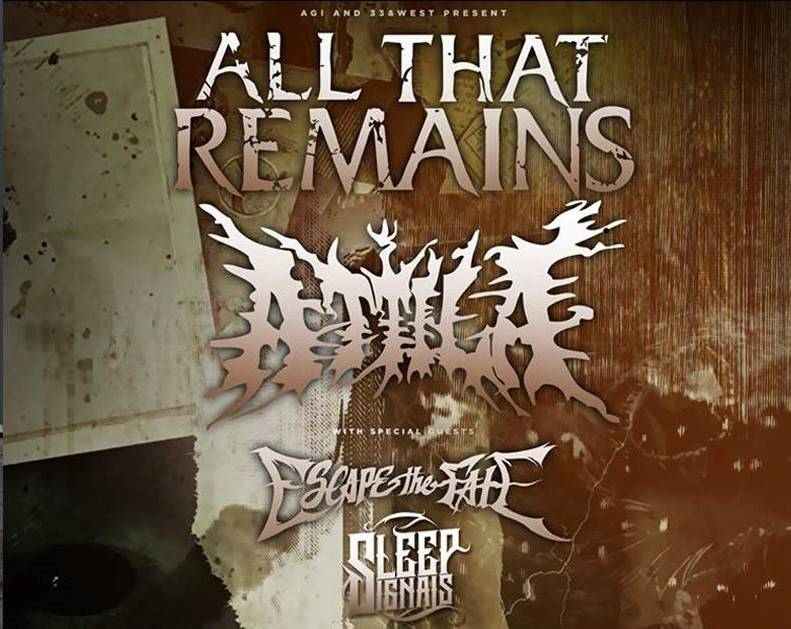 Orlando, Florida (April 7, 2019) – Tonight, The Hard Rock Live in Orlando, FL, lived up to its name and rocked hard with top notch line up of bands. Escape The Fate, Attila, and All That Remains as well as an exciting new band in Sleep Signals were all set to share the stage tonight. This was a night that would make fans of new music and established bands both happy.

The first band up tonight is a hot new band based out of Minneapolis, Minnesota, Sleep Signals. Founded in 2014, they have toured relentlessly with bands such as Bobaflex, In Flames, Saving Abel, and Seether. All the touring with these bands has really had a positive effect on them and it showed with their stage presence. When the guys in the band hit the stage, you could see the excitement and energy in them. Of course, this rubbed off on the audience and dialed up the energy in the building. The performance that they delivered showed that these guys can handle being a headliner when they get the chance. Singer Robert Cosgrove is a natural. He stalked the stage like a seasoned pro while doing an amazing job singing a set that included songs from their most recent album At the End Of the World. Guitarists Sean Fitz and Cody Lane both were tack sharp in their playing and both fun to watch too. The rhythm section of bassist Alex Nikolas and drummer JJ King were rock solid as well. For sure this was one hell of a way to open up the night. If Sleep Signals was the only band on the bill, it would be a great night. But there were more bands to keep the crowd entertained.

Next up was Escape The Fate. With the crowd revved up from Sleep Signals, the guys in Escape The Fate, did a great job in keeping the party going. With a nice mix of melodic and hard rock sound they definitely have earned the fans that they have and put on a highly entertaining show.

After they were done, it was time for Attila to show everyone what they can do. With Attila being based out of Orlando Florida, this would be a home town show for them. When they came out on stage you could tell that the crowd there was definitely big fans of the band. Everyone there was cheering loudly for them. These guys came out on fire. You could see that they wanted to blow away everyone of their fans there, and they did just that. Once they got the crowd revved up the crowd surfing started and then a good sized mosh pit opened up. Even some woman’s undergarments tossed on stage! They had the crowd on their side for sure and this shockingly unsigned band out of Atlanta Georgia did an amazing job.

Finally, it was time for All That Remains to close out the night. With the passing of long time lead guitarist Oli Herbert, no one new what to expect from the band. But with long time friend of the band Jason Richardson taking over lead guitar duties they sounded like they didn’t miss a beat. Of course, Phil Labonte did his usual amazing job. Going from a nasty growl to a melodic sound he wowed the crowd with his prowess. It was great to see this veteran band back in action and still on top of their game.

On this night, every band put forth their best. Escape The Fate, Attila, and All That Remains wowed the fans with their performances. From Escape The Fate and All That Remains showcasing their considerable talents, to the shear electric excitement of Attila playing a home town show the fans got more than their moneys worth. Then There was Sleep Signals, the young guns of the night. They wowed the crowd and showed that they are the future of hard rock, and the future looks very bright.