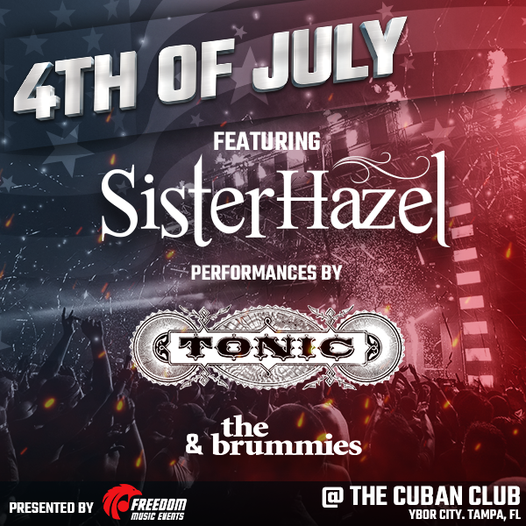 It’s the Fourth Of July in Tampa Florida. While there are those that chose to celebrate at the beach, or at a pool party or even check out the local fireworks; but for lovers of live music the spot to be was The Cuban Club in Ybor city. This year, Freedom Music Events put on the only concert for miles. They managed to get three bands to grace the courtyard stage, The Brummies, Tonic, and closing out the show would be Sister Hazel.

Florida’s notoriously fickle evening weather was fully in play for the week leading up to the concert, as there had been tons of evening storms. Thankfully, the concert gods smiled on the promoters, the bands, and naturally all the fans as it was a beautiful evening to have a concert outdoors. The first band on this evenings fare was The Brummies. This four-piece band out of Birmingham Alabama with two releases under their belts and plenty of touring including opening for Kacey Musgraves were a great choice for the bill. With a sound that mixes the feel of sixties psychedelic and nineties folk rock they definitely have a sound all unto themselves and it works great. While many weren’t aware of them, judging by how quickly the crowd warmed up to them, you knew they gained plenty of new fans.

Now it was time for a band that everyone was far more familiar with, multi-platinum recording artist Tonic.  With a career stretching back to the early nineties and multiple hit singles, as well as contributing to the soundtrack for the hit movie American Pie, this was a band with more than enough material to thrill everyone in attendance. They went with the go big or home attitude right from the opening number “Open Up Your Eyes”. With plenty of distortion ladened guitars and Emerson Hart’s clean vocals they sounded as great as they ever have. Over the course of their set, they had the crowd in the palm of their hands. With great stories and a surprise cover of Fleetwood Mac’s hit song “Go Your Own Way” this alone made for a great night of music. Now add in their mega-hit song “If You Could Only See” as well as their hit song from the American Pie soundtrack “You Wanted More” and you’ve got a show that will make great memories.

Finally, it was time for Florida’s own Sister Hazel to wow the crowd. This five-member group hailing from Gainesville was all too familiar to everyone here as witnessed by plenty of fans wearing t-shirts from previous tours the band has done. With ten albums and five E.P.’S under their belts, there was certainly no shortage of material for them to entertain their fans with. Over the course of the evening, they thoroughly entertained all the Hazelnuts, the nickname that their adoring fans have, with their bluesy, folk infused rock music. Hits like “All For You”, “Change Your Mind”, and “Mandolin Moon”, had their fans dancing in the open-air courtyard of the Cuban Club. Throughout their seventeen-song set, not only did they entertain everyone with their flavor of music, but with the performance outside everyone was able to see fireworks going off from all the displays that the city of Tampa was putting on.

What a great night of music that was put together by the promoter Freedom Music Events. They certainly did their job quite well in picking the bands, the venue, and of course the night. There is no better combination than live music, along with some fireworks going off. Tonight, was just that as The Brummies, Tonic and Sister Hazel all delivered great performances and with a little assist from the fireworks throughout the city this was about as perfect a fourth of July as anyone could have ever asked for.