Detroit, Michigan (May 15, 2019) – Metalheads set their sights on the Fillmore Detroit Wednesday as arguably the hottest tour of the spring barreled into the Motor City. Parkway Drive, along with Killswitch Engage, have joined forces on the “Collapse the World Tour” with intent to ‘melt the faces’ off any metal fan who comes to bear witness to this traveling spectacle!

As co-headliners go, Killswitch Engage (KSE) and the Aussies, Parkway Drive, have been swapping turns closing out the show each night. Tonight it was Parkway Drives turn, but don’t let that fool you, KSE was ready and more than willing to unleash its searing metal core repertoire on the rabid crowd.

When Killswitch Engage hit the stage, they came out blazing. With an intense opening run of “This Fire Burns,” “Rose of Sharyn” and “End of Heartache,” the tone for night was set. Crowd surfers instantly took flight and rode a sea of outstretched arms to the front of the house while the moshers in the middle did their thing. Even the over the top lightshow blossomed into a visceral experience, which moved the needle a notch upwards on the intensity meter!

KSE’s sixteen-song, high-energy set spanned their twenty-year career and included a couple newer cuts,“Hate by Design” and “Strength of the Mind” off the 2018 release Incarnate. But it was the older stuff that resonated the deepest with the crowd. Classic cuts “Vide Infra,” “My Last Seranade” and “Life to Lifeless” featured the powerful vocals of Jesse Leach and the onstage antics of guitarist Adam Dutkiewicz, which, by opinion only, took some of the edge off the intense performance. KSE wrapped up their night with a stunning rendition of the Ronnie James Dio metal anthem “Holy Diver,” which put a resounding exclamation point on a brilliant performance. 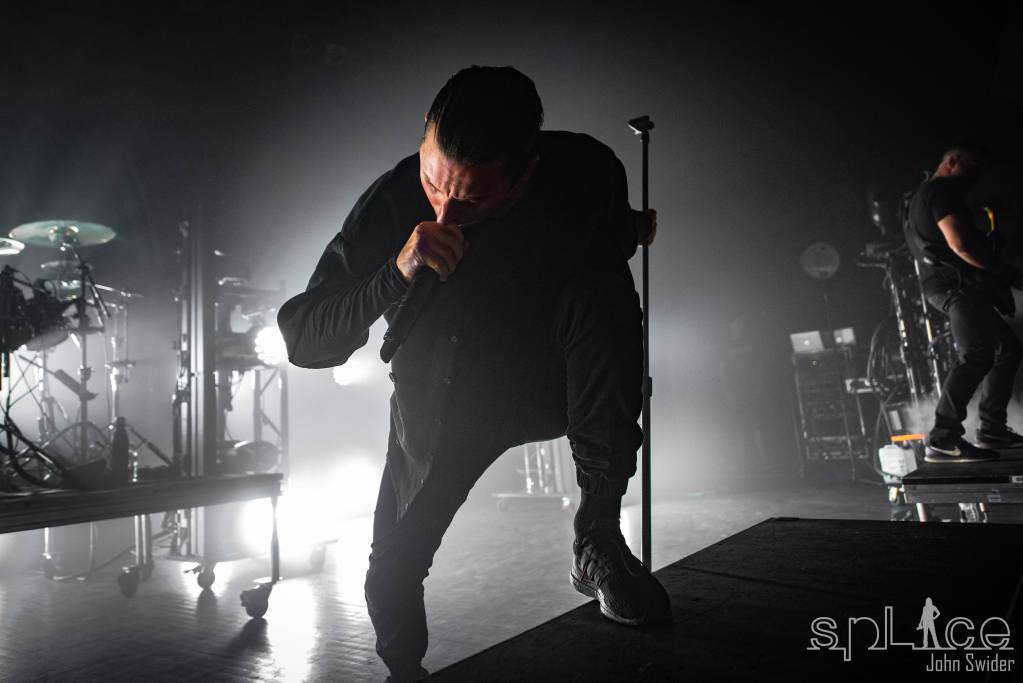 After a short time was given to allow metal heads to regain their senses after Killswitch Engages’ blistering show, it was time for the main event. With an exorbitant amount of energy permeating the air, Parkway Drive made their stage appearance for the first time in Detroit in over 2 years. With a wall of sound that they have grown and cultivated over their career, the metal core group from Australia literally grabs their fans by the throat from the beginning and refuses to let go until they are done. Opening with “Wishing Wells,” “Prey” and then reaching back into the archives for “Carrion,” the song selections came fast and furious and were welcomed with one of the rowdier mosh pits in recent memory.

Front man Winston McCalls vocals are still the standard in the genre and continue to mix well with the smoking riffs that Luke Kilpatrick and Jeff Ling bring to the table night after night. During the hard rock cross over “The Void,” the dynamics developed over time between the trio result in some powerful breakdowns and serious axe work. Add in the pounding rhythms from bassist Jia O’Connor and Ben Gordon sitting behind the set, it becomes readily apparent why this metal core band is finally getting the worldwide accolades they rightly deserve.

Even though Parkway Drive performance was a metal heads delight and one of the better shows we have attended during 2019, there was still some disappointment displayed from the longtime fan base. Sure, they reached into the archives for a few of their more relevant songs in their career such as “Carrion”, “Karma” and “Deep Blue,” but it still wasn’t quite enough to satisfy “long timers”. Fact is that 10 of the thirteen songs on Thursday’s setlist came from the bands most recent studio releases, 2018’s Reverence and 2015’s Ire. Granted, most bands play to the masses and Parkway Drive was no different. It would have been a classy move on their part to reach a little deeper into their history and give both old and new fans a taste of the material that got them to this point in their career. Was it a major disruption in Parkway Drives overall performance? No, but it does deserve to be noted.

The lack of the old school stuff did nothing to dampen the spirit and energy the crowd had though. Throughout the entire set, the floor was a mass of tangled bodies as multiple mosh pits combined into one. The continuous stream of crowd surfers only intensified as the night wore on and during one point the twelve security members at the stage front became overwhelmed and could not keep pace. Even during the extreme encore of “Crushed” and “Bottom Feeder” that put the wraps on the night, the chaos continued to the delight of both Parkway Drive and their delirious fans.

Lets face it, Parkway Drive and Killswitch Engage have a sound that doesn’t appeal to everyone. The average music fan who listens to their local FM rock station may never get the opportunity to sample their music and that would be unfortunate. But these 2 metal powerhouses continue to bring the goods every night and their material is now in a constant rotation on SiriusXM radio. They have separated themselves from the rest of the genre by honing their skills  and cultivating a following with over the top live performances like we witnessed tonight. The time is now for both of these bands to make their mark in the world of music while staying true to the genre. Don’t be “unfortunate” and pretend this genre doesn’t exist. It does and if don’t believe us, go to a show and revel in the moment, you might just have the time of your life!|