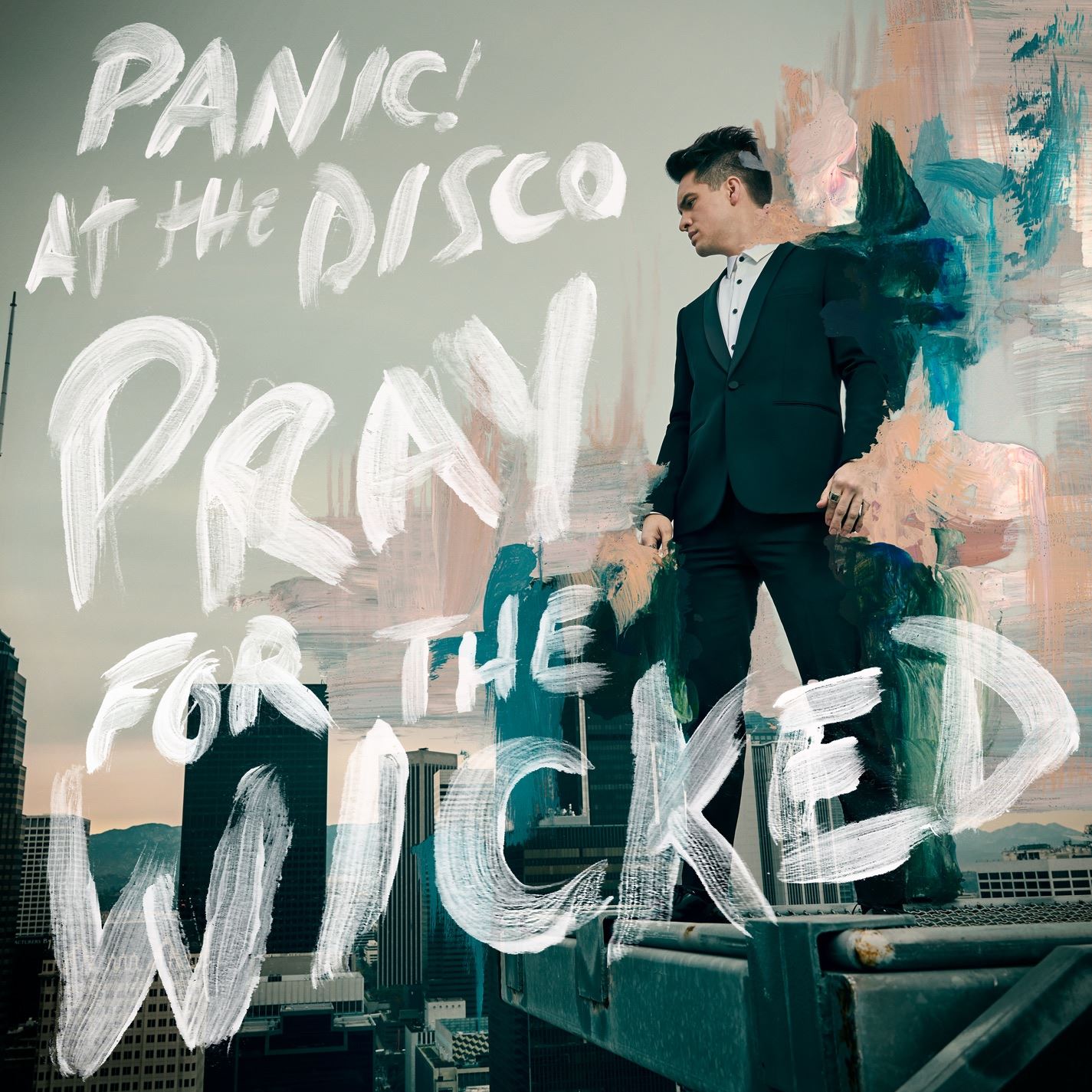 Charlottesville, Virginia (January 23, 2019) –  About 4 miles from Thomas Jefferson’s historic Monticello, and back-dropped by the Blue Ridge Mountains, the John Paul Jones Arena is the venue for tonight’s Panic At The Disco Pray For the Wicked Tour 2019 Concert.

If this show is not sold out it is very close, because I can’t spot an empty seat in this 14,593 seat arena.

The lights drop as Australian singer-songwriter Jessica Newham also known as Betty Who hits the stage. Accompanied by her two backup dancers, her powerful vocal performance is packed full of energetic dancing that has me wondering how they are never out of breath. Starting out with her collaborative hit “Rocket Girl” created by Norwegian duo Lemaitre. Betty Who‘s singing style has been compared to the strength and range of Katy Perry throughout the years.

“It’s T minus one, ooh Watch me fly across the universe…”

I would describe Betty Who‘s energy to that of an aerobic work out yet still with the vocal flawlessness that the fans came to see. Her recognizable catchy anthems, embedding pop chorus lines into the minds all those who hear them. Betty Who ended her set with her super cheerful mood lightening pop hit “Somebody loves you” from her debut album, Take Me When You Go on RCA records.

Two Feet
In contrast to the poppy cheerfulness of Betty Who , the dark moody vibes of Two Feet are now about to take over. The stage lights wash over the venue with a deep blue hue as New York singer-songwriter Zachary William “Bill” Dess takes the stage as Two Feet. In earlier years Dess performed locally in New York at jazz and blues groups before forming Two Feet. Two Feet opens with the soothing vocals of the song “You’re So Cold”.  The song has an electronic driving beat accompanied by rhythmic bluesy strums of the electric guitar creating an almost cinematic experience to the night while watching the performance.

Next up was the song “Had Some Drinks” featuring a deep bass filled chorus and soulful guitar lead.

The soulful sounds of the reverb laden guitar echo across the John Paul Jones Arena as the bluesy tunes of Two Feet continue to rock the crowd with the song “Quick Music Doodles”. The crowds voices echo throughout the building as they sing along to Two Feet as he cover covers Bill Withers  “Ain’t No Sunshine” and  captivates the crowd with his body rocking guitar skills.

The viral breakout hit from Two Feet’s debut EP, First Steps, “Go F*ck Yourself” brought a roar from the crowd. Different groups of fans where wholeheartedly singing the lyrics,..

“Cast me far away
Play these little games
Actin’ all okay
Today, today”

Ending the set with the 2018 chart topping synth-driven   “I Feel Like I’m Drowning” from the album: “A 20 Something Fuck”, Two Feet left the John Paul Jones Arena engulfed in a deep bass buzzing happiness.

Panic At The Disco
The stage seems to be ready for Panic At The Disco to end the night. The lights drop and a video appears on the backdrop of the stage with a countdown clock starting at 10 minutes as the crowd erupts! These large white digital numbers have the crowd antsy aand everyone stands up and start spontaneous screaming as the seconds pass by.  The countdown reaches the halfway mark of 5 minutes and the crowd erupts again anxious to see tonights collection of entertainment from the beloved band.

The clock hits one minute as Toto’s “Africa” plays over the arena’s PA system and there is an escalating excitement coming from the fans in the room. The digital clock hit 10 seconds and seemingly the whole venue counts down with it.

The screen now only shows the familiar Panic At The Disco exclamation point inside a circle inside a triangle symbol repeated across the screen  four times. Suddenly  a blue and red cascade of light showcases the band on the back the stage complete with string section stage right and a horn section stage left. The strings begin playing a beautiful intro as the rest of the band enters onto the stage. I have spotted drummer Dan Pawlovich, guitarist  Mike Narnan and bassist Nicole Row as the intro builds but no sign of front man Brendon Urie.

Then out of no where through a trap door in the back section of stage Brendon is launched at least 10 feet into the air and land on the stage as the place erupts and Panic immediately breaks into the song (Fuck A) Silver Lining from their 2018 “Pray for the Wicked” album.

The horns and string sections brings such a polished depth to the songs its overwhelms one’s ears with a musical intricacy that a lot of bands sometimes lack. Brendon works the stage like that of true showman while pleasing the crowd with an arrangement of some of their spectacular hits.

Don’t Threaten Me With a Good Time, and LA Devotee  from the album Death Of A Bachelor on DCD2 / Fueled By Ramen

The band seems to play on forever, anthem after anthem including songs like ‘This Is Gospel‘ from the album, Too Weird To Live, Too Rare To Die! – from DCD2 Records / Fueled By Ramen

I recently discovered something called “The Death Walk” in relation to Panic At The Disco. During the show Brendon leaves the stage and walks through the crowd accompanied by security and venue staff while singing and giving hugs and taking selfies with people. It takes a while but he ends up toward the back of the venue where there is now another white piano waiting for him that he takes a seat at.

He then begins to perform an amazing Bonnie Raite cover of “I Can’t Make You Love Me” as his piano begins to rise above the crowd and float across the venue. There are cellphone lights shining around the otherwise dark arena and it looks magical as Brendan showcases his superior vocal range to his adoring fans. At one point he stands up on the suspended platform and bends down singing directly to the audience as the crowd cheers and swoons. I couldn’t help but to try to capture it on my cell phone:

There was no shortage of dance tune vibes either as Nicole Row’s bass lines slide effortlessly through songs like Girls/Girls/Boys and the intoxication bounciness of the song “Roaring 20s” also from the 2018 album Pray for the Wicked.

Throughout the show there are songs that are highlighted with confetti cannons, fire displays shooting across stage and thick low lying fog that accent the band not to mention the digitalis displays from floor to ceiling behind the band that are constantly changing.

Brendon performs a drum solo with his own drumset at the front of the stage at one point and the crowd is loving every minute of it. After disappearing again via a stage trapdoor. Brendon reappears with another white piano. Brendon says, “This next songs centers around a band, more important a man in that band who’s career changed everything in music, and umm the band is called Queen” The crowd erupts as the band starts the lyrics to the beginning of Queens “Bohemian Rhapsody”

“Is this the real life?
Is this just fantasy?
Caught in a landslide
No escape from reality

Open your eyes
Look up to the skies and see
I’m just a poor boy, I need no sympathy
Because I’m easy come, easy go
A little high, little low
Anyway the wind blows, doesn’t really matter to me, to me”

This is a production that is not to be missed. It is the definition of entertainment and you will not be disappointed. If you would like to catch Panic At The Disco  on tour you can find dates here: https://panicatthedisco.com/tour/

Setlist:
(Fuck A) Silver Lining
Don’t Threaten Me With a Good Time
Ready to Go (Get Me Out of My Mind)
Hey Look Ma, I Made It
LA Devotee
Hallelujah
Crazy=Genius
The Ballad of Mona Lisa
Nine in the Afternoon
One of the Drunks
Casual Affair
Vegas Lights
Dancing’s Not a Crime
This Is Gospel
Death of a Bachelor
I Can’t Make You Love Me (Bonnie Raitt cover)
Dying in LA
The Greatest Show (Pasek and Paul cover)
Girls/Girls/Boys
King of the Clouds
High Hopes
Miss Jackson
Roaring 20s
Bohemian Rhapsody (Queen cover)
Emperor’s New Clothes