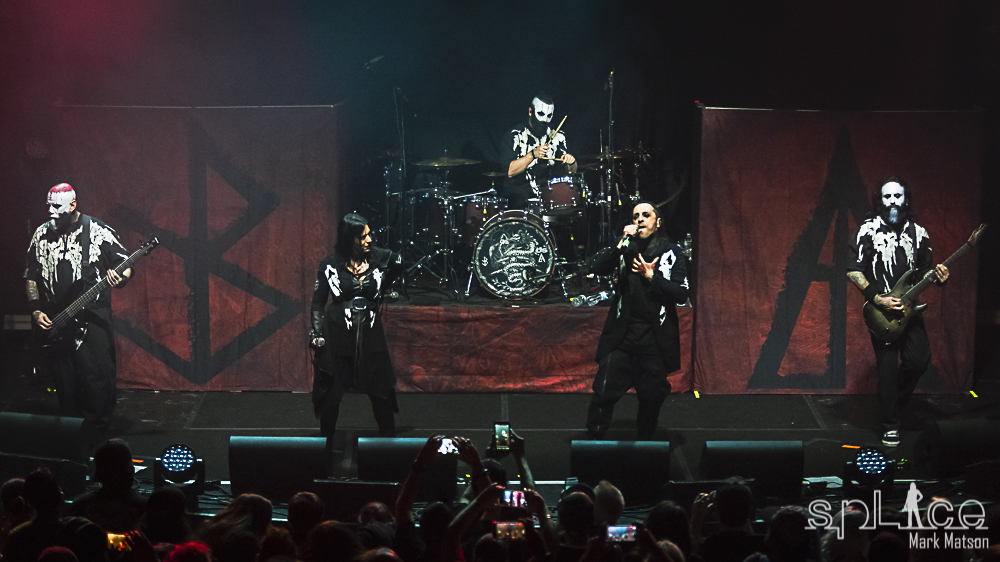 As the concert scene has slowly come back to life, bands that haven’t seen the stage in some time are finally getting out to reconnect with their fans. With previously cancelled tours now being resurrected, everyone is feeling excited. One tour that generated equal parts of excitement when it was announced, and sadness when it was put on hiatus was Lacuna Coil. As the date approached in April, The excitement was high as it looked like finally this show would happen.

With a massive line wrapped around Orlando Florida’s Plaza Live, it was obvious that this concert was sold out. With the anticipation palpable all the fans were thrilled with what was about to go down. With the venue packed and the coveted spots at the rail guarded with tenacity, those last moments before the show would start seemed to last forever. Finally, the lights went out and the stage lights came alive to the sounds of everyone cheering.

The moment finally arrived for Italian gothic metal band Lacuna Coil to hit the stage. Drummer Richard Meiz made his way behind his kit. With his face painted white and black as well as a black and white jump suit, he was an imposing figure standing there while saluting the cheering crowd. Joining him next was bassist Marco Coti-Zelati, and Diego Cavallotti, with both of them also in face paint as well. Finally, two cloaked figures made their way out, with them being singers Andrea Ferro and Cristina Scabbia. With an entrance like that they definitely have the gothic part down pat.

They promptly launched into “Blood, Tears, Dust” off of their 2016 release Delirium. Under a sea of swirling lights, Ferro and Scabbia traded off vocals. Ferro’s growling style vocals paired perfectly with Scabbia’s more operatic style. Throughout the song everyone in the band was beaming. It was obvious that they were thrilled to be back on stage. They followed it up with “Trip The Darkness”. During the song Cristina would frequently work to get the crowd fired up. It wasn’t like she needed to do much as all the fans were in cheering wildly.

Now it was time for the band to introduce everyone to some new material. With their latest album Black Anima having been released back in 2019, their fans would finally be introduced to some of the latest songs off of it live. The next three songs they played were “Reckless”, “Apocalypse”, and “Layers Of Time”. Everyone of those songs was met with enthusiasm and tons of head banging. Their performance of “Save Me” from the album was particularly inspired. Cristina even came off the stage to perform face to face with all the lucky fans up front.

They kept up the energy level throughout the show right to very end. This was readily seen with the penultimate song “Our Truth”. With Cristina getting the willing crowd to cheer to her satisfaction to start things off, her and co-singer were Andrea Ferro jumping in the intro to the song. Even drummer Richard Meiz had his moment with his on point drum solo. The final song of their performance was the well named “Nothing Stands In Our Way”. Indeed, nothing did stand in their way, not even a pandemic from delivering a knockout performance.

As the crowd streamed out of the plaza Live, not a single person was disappointed. After all this was the show that everyone had been waiting for and on all fronts Lacuna Coil delivered. While it has been a couple of years since they have toured in the United States, the band hasn’t missed a beat and delivered the goods. While Lacuna Coil is on tour, this is a must see show that should be at the top of your list.