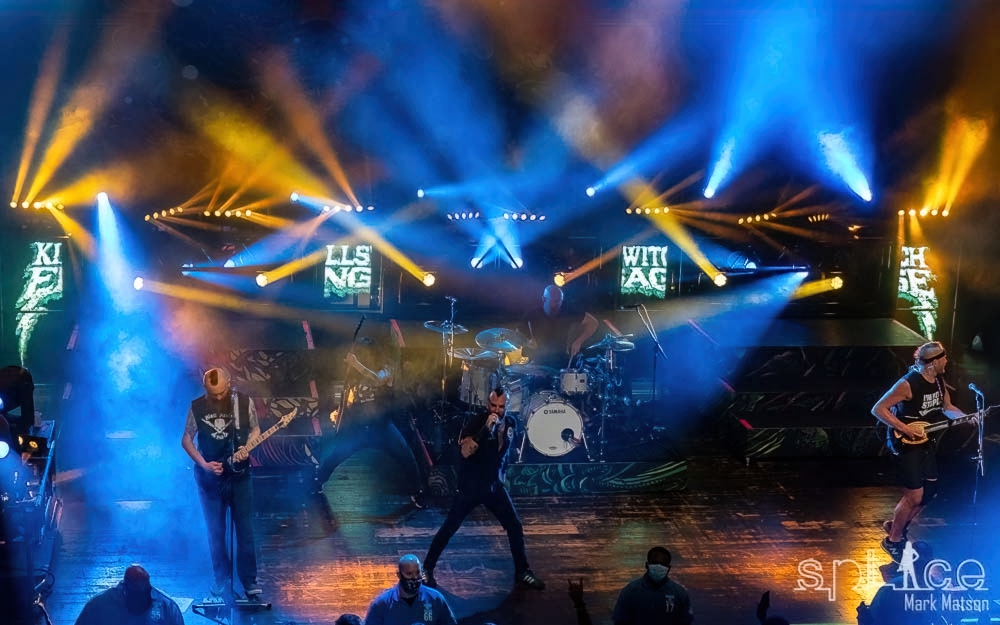 In what seems like a lifetime ago, back in 2020 Killswitch Engage put together one hot ticket. Billed as the Atonement Tour, they were hitting the road with two powerhouse acts in August Burns Red and Light The Torch. But as everyone knows by now a pandemic threw a big wrench into the works. Thankfully all three bands were hell bent to make things happened. Finally, in the winter of 2022 the coast was clear, and all the bands packed up their buses and hit the road to the rabid delight of all their fans.

With the wait finally over, and the tour in high gear all the bands finally arrived in Orlando for their stop at the House Of Blues. Seemingly with a flip of the switch, the front of the House Of Blues was packed with fans in disbelief that the show indeed was going to happen. No last minute cancellations happening here! Being that the tour had been postponed, people were stopping by the box office to try and score last minute tickets, but this show was sold out and the unlucky ones were left to scalpers or an early drive home.

With a concert like this one, there would be no pregaming this show and coming in for the main act. The House Of Blues was packed early on. After all The first band to hit the stage would be Light The Torch. The casual fan may know their music from Sirius XM Octane, but fans of Killswitch Engage are all too familiar with lead singer Howard Jones, as he fronted Killswitch Engage for many years. Finally, it was time for the fun to begin. Under a sea of dark blue, the guys in Light The Torch hit the stage and launched into “More Than Dreaming” the lead track off their latest album You Will Be The Death Of Me. Howard Jones sounded great and was all smiles as the crowd gave them nothing but love.

Throughout their all too short set, Jones made perfect use of his baritone voice belting out song after song with bassist Ryan Wombacher joining in for some well placed backing vocals. Of course, they played their biggest hit “The Safety Of Disbelief” as well as their latest single “Death Of Me”. Howard Jones was in near constant motion all night, stalking the stage as he delivered song after song. Somehow, they managed to sneak in ten songs to the delight of everyone in attendance. If this were solely a Light The Torch show, this performance alone would have been more than enough to make everyone happy. Thankfully in the immortal words of info-mercials “wait there’s more”.

With the packed house barely having enough time to recover it was now time for metal powerhouse August Burns Red to deliver their brand of music. With the band hitting the stage to a cheering audience, lead singer Jake Luhrs jumped up on the riser at center stage and threw his hands up in the air to get an already pumped up audience even more fired up. With the packed house going nuts they launched into “The Truth Of A Liar”. With guitarists JB Brubaker and Brent Rambler on either side of Luhrs on risers as well they set the tone for their performance, high energy, technical, and absolutely brutal.

While many bands love their shows lit with red’s and blues to set a mood, August Burns Red went another way completely. During the next song “Meddler” their light show really kicked in. With the performance bar set impossibly high, they had lighting that was at the same level of their music. With greens, yellows and white spots firing off all over the place, they even had lasers going off too. With Luhrs yet again standing center stage on the riser he was swinging his mic in huge circles and catching it during breaks in his vocals, all this along with the incredible light show going on you couldn’t help but be caught in the moment and not wanting it to end.

At one point in the show Jake Luhrs said to the audience “We’ve got four super strong security guards up here. For this next one I want to see some crowd surfing action” The band launched into “The Legend Of Zelda Theme”.  The song had barely started, and the crowd gave them what they wanted, waves of people started crowd surfing and keeping security busy catching them. During “Whitewashed”, the final song of their part of show, Luhrs drew a line with his arm and got the crowd on either side to back up to each side of the venue. When his countdown hit one not only did the band launch into the song, but a wall of death was unleashed and half of the floor of the House Of Blues became a mosh pit.  What a way to end a show!

As good and as popular the previous bands were, now it was time for the group that everyone was here to see, Killswitch Engage. With all the fans revved up by the incredible performances that had been delivered so far, the place was a powder keg of excitement just waiting for Killswitch Engage to come out and light the fuse. When the stage lights finally came alive all the members of the band except for lead singer Jesse Leach made their way on stage and started playing their instruments. Finally, Jesse Leach made his way out and stood on the riser setup behind drummer Justin Foley’s kit. The man was one hundred percent pure intensity as he shouted, “LET’S GO” and they ripped into their 2019 Grammy Award nominated single “Unleashed”.  To say the energy level was through the roof would be an understatement.

There would be no taking a quick break to let everyone catch their breath after that wicked opener. Without any hesitation they launched into “Hate By Design”. The guys in Killswitch were obviously feeling the energy from the crowd. Guitarist Adam Dutkiewicz was frequently jumping around the stage while bassist Mike D’Antonio was whipping his hair almost through the whole song.  When the song was over Dutkiewicz stepped up to the mic and noted that the crowd was trying to get a mosh pit formed he said “It’s time to wake up. Just because your state looks like a flaccid penis doesn’t mean you can act like a lazy flaccid penis. Get that thing chubbed up, fill it up with blood and open up the god damned pit.”.  They immediately started playing “The Crownless King”. From the second Jesse Leach sang the word “GO” the pit opened up and Killswitch held up their part of the bargain and gave them a performance worthy of a big mosh pit.

Of course, they played their hit song “I Am Broken Too” as well as fan favorite “My Curse”. In a surprise move, Adam D said to the audience “This is the first time we’ve ever played this song live, ever. So, we might f*ck up a lot. So cut us a little f*cking slack. Here is a song called “Reject Yourself””. If they made any mistakes, no one noticed or cared. From a fans point of view, just like every other song they played on this night they killed it.

As good as the show had been, and indeed it has been an epic one, the best came towards the very end of the evening. As every show so far on the tour Howard Jones came out to sing the last three songs. While there would be no surprising the fans at this on stage reunion of sorts, it was still a highly anticipated part of the concert. This was an incredible opportunity to gt a chance to see Killswitch perform some of their hits with the man who actually sang them. With the crowd chanting “Howard, Howard, Howard”, the man himself came out and the band played “Rose Of Sharyn”. Howard sounded fantastic and it was a real treat to actually see this. With the crowd singing along, you could see him smiling and enjoying the moment. Jesse Leach came back to join everyone on stage and said to everyone “How cool was that sh*t”. He was dead on accurate, it really was cool. He gave Howard a fist bump and together they performed “End Of The Heartache” as well as the last song of the night “Signal Fire”. Seeing them both together on stage really gave extra dimension to these songs as they both bring their own style to it, and together this is one of those moments that fans won’t forget for years to come.

In a concert that had been two years in the making, it was definitely well worth the wait. With these three bands on one bill, it is more than a concert, its an event. From the music to the performances, to the light show, this night was memorable. Light The Torch, August Burns Red and Killswitch Engage all played their hearts out and put on a masterclass show. Jesse Leach nailed it when he said, “How cool was that sh*t”. He may have been referring to one performance earlier, but it really summed up the whole night perfectly.