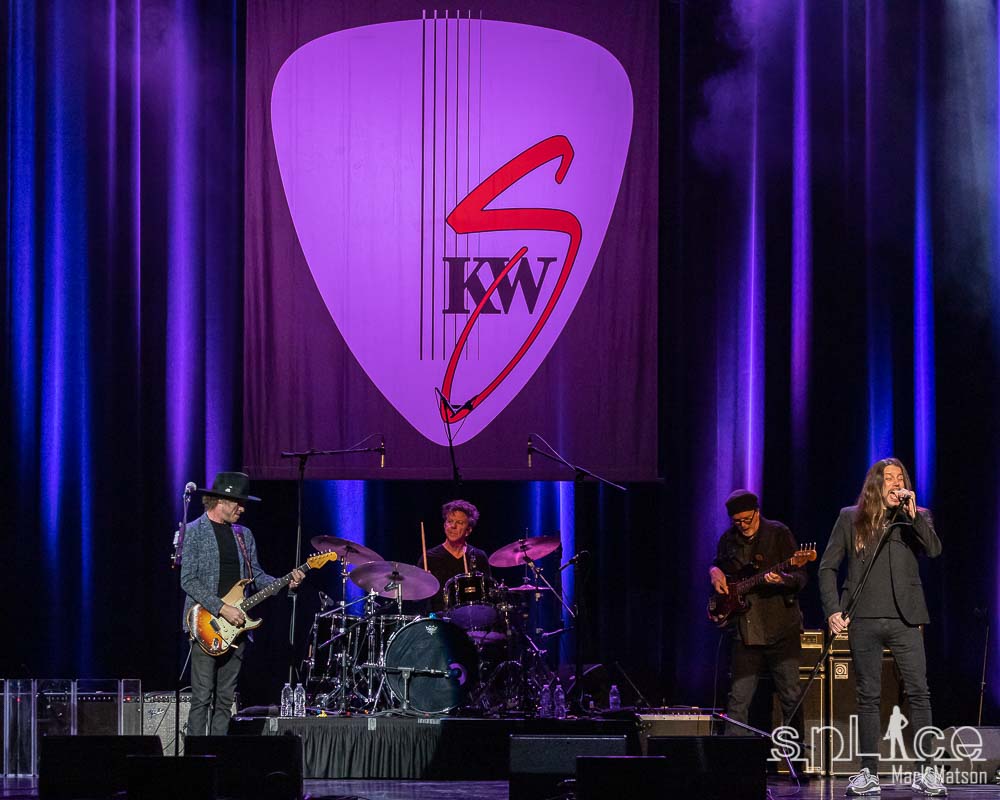 Some twenty five years ago a young Kenny Wayne Shepherd released his watershed album Trouble Is launching him into the stratosphere of guitar greats. Since then, he has garnered five Grammy nominations, won two Billboard Music Awards as well as winning two Blues Music Awards. Tonight, he brought all his talent as well as a huge helping of Trouble is to the Hard Rock Live in Orlando Fl. While this show could be part of the upcoming tour to celebrate the anniversary of Trouble Is, it is actually a rescheduled date from nearly a year prior that was cancelled due to the pandemic.

Starting off the night was the Ally Venable Band. This Texas based trio is fronted by guitarist and lead singer Ally Venable. At the ripe young age of twenty two she already has a four album catalog to pull from to entertain the crowd at this near sold out show. For a little over a half an hour she dazzled everyone with her playing as well as impressed with her voice. Just like Kenny Wayne Shepherd, this wunderkind is clearly a student of the blues. For her last number she told the audience that since she is a Texan one of the artists that got her into the blues was Stevie Ray Vaughn. With that she played “Lenny” the instrumental from Stevie’s album Texas Flood. From the jazz infused chords, to the blues licks and subtle whammy bar use, she nailed this cover.

After waiting for so long for this show to happen, the crowd was anxious for the concert to begin. As the house lights dimmed and the stage lights came alive revealing a simple stage setup with a guitar pic shaped backdrop adorned with Kenny’s initials as well as guitar strings. Immediately Kenny and his full band launched into “Trouble Is” the instrumental track from the namesake album. It was obvious from the first notes that Kenny was looking to make up for the long delay in coming to Orlando. His fingers were burning up the fret board and the band was crisp and tight.

Speaking of the band, tonight he had a full stage of musicians. Besides his long time singer Noah Hunt, he brought along bassist Kevin McCormick, drummer Chris “Whipper” Layton, keyboard player Joe Krown. He even had a horn section with Mark Pender playing trumpet and sax player Joe Sublett. With the addition of the keyboards and horns it really added layers and textures to his music. If anything, having them perform alongside Kenny on stage helps to far surpass his recorded material which is no mean feat.

For their next song, they chose something new, “Woman Like You” from his recent album The Traveler. This rollicking up-tempo blues rocker was a wonderful choice to highlight one of his new songs to everyone in the house. They dove back into the Trouble Is album for the gem “Kings Highway”. Noah Hunt’s vocals were just as soulful as they were when they recorded this song twenty five years ago. Kenny on the other hand wasn’t at the level of the recording, his playing as would be for the whole night was otherworldly. Every solo break in the song he was simply put, on fire. With his head hung low and his face covered with his black wide brimmed hat, you could just make out on his face that he was channeling everything he had into his trusty Strat.

In between “True Lies” and “Everything Is Broken” from Trouble Is he went to his 2011 release How I Go and played “Heat Of The Sun”. This was one of the slowest numbers he played all night. While it might not of matched the tempo of the night overall, it was equally as powerful and definitely earned its place on the setlist by displaying the bands ability to deliver an emotional understated performance. They followed it up with a lively performance of “Somehow, Somewhere, Someway” which was perfectly placed in the setlist to bring the tempo back up at the perfect rate.

The bands performance of “Shame, Shame, Shame” was a masterclass in how the blues should be performed live. Instead of keeping it to the recorded version, they were able to stretch it out and deliver an extended jam. Hunt’s soulful voice made you feel the lyrics while Kenny Wayne added some of the nastiest vibrato ever played to counterpoint Hunt’s singing. Even Joe Krown had a tasty keyboard moment with his solo. But as it should be, it was Kenny Wayne’s guitar work that was the star of the song. He turned the heat up on this one, between blasting out impressive runs he would pose with a hand held high while he held onto a final note as if he were wringing everything out of that exact moment.

As Kenny Wayne isn’t afraid to cover artists on his records, it’s the same the live. Tonight, he chose the Joe Walsh classic song “Oh Well” that he also featured on his recent album The Traveler. They more than captured the feel that Joe Walsh created with this number. They also covered the classic Slim Harpo song “King Bee”. Now this was a song that is definitely smack in their wheelhouse. From Hunt’s singing to the horns, to the keyboards the band really cut loose. The rhythm section of Layton and Franklin kept them churning along with precision. But Kenny Wayne’s playing again was the star. In a surprise, they decided to play the Fleetwood Mac song “Oh Well”. While this wasn’t a song you would expect the band to play, getting the chance to recreate some of Lindsey Buckingham’s guitar work on stage was the magic that they wanted to deliver.

It wouldn’t be a Kenny Wayne Shepherd concert without them playing the number one hit song from Trouble Is, “Blue On Black”. Noah Hunt joining on acoustic guitar to add some additional layers to the song. They delivered a rendition that had everyone singing along. They closed out the night with one of the most famous guitar songs of all time the Jimi Hendrix classic “Voodoo Child”. If there is one song that requires utter and complete mastery of the guitar it’s this one. Of course, Kenny Wayne has more than enough chops to pull this one off and boy did he pull it off. Kenny Wayne played solo’s that were a nod to the master that wrote this, as well as Stevie Ray Vaughn who made it his own. His playing on this track was easily equal to the two guitar greats that have laid claim to the song. With the showmanship that he displayed as well; you can add Kenny Wayne Shepherd to the exclusive club of guitar players that this song belongs to.

Even though it took almost a year to pull this show off it was definitely worth the wait. Throughout the course of the night Kenny Wayne Shepherd showed why he is considered not only one of the best blues guitarists, but one of the best guitarists period. With this being the 25th anniversary of Trouble Is, it was great to see that Kenny Wayne included six songs from this incredible album. If this show was a sign of things to come for the upcoming anniversary tour for Trouble Is those will be stellar shows, just like this one was.