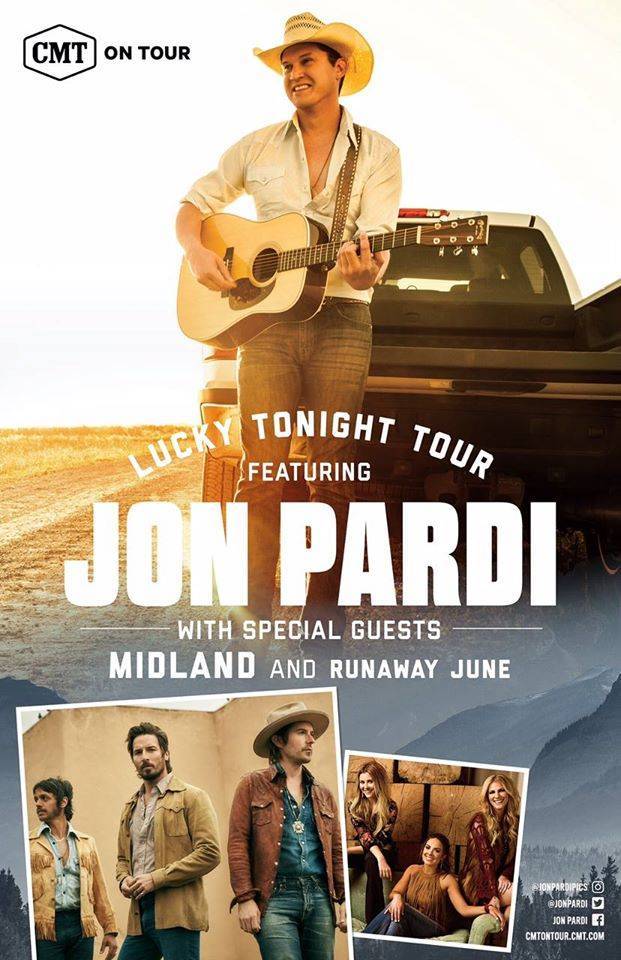 Detroit, Michigan (December 07, 2017) – The Fillmore Detroit was the latest tour stop for Jon Pardi and #cmtontour, “Lucky Tonight Tour”. Pardi is on the road in support of his latest release, California Sunrise. California Sunrise is an album where you’ll hear old country style, reminiscent of the country legends, infused with lyrics that speak to today’s listeners. Along with special guests, Levon and Runaway June, the stage was set for a classic old-school country show with a modern day twist.

As a last-minute replacement for the band, Midland, which is currently touring with Pardi, Levon had big shoes to fill. Levon is a new all-male trio out of Nashville, Tennessee featuring five-octave vocal ranged, Michael David Hall (guitarist and lead vocalist), multi-instrument-talented,  Jake Singleton (bass and harmony vocals) and seasoned bluegrass musician, Ryan Holladay ( guitar and harmony vocals). Tonight Levon was first to grace the stage of The Fillmore Detroit. The trio performed a short set in support of their current self-titled EP Levon. With their smooth harmonies on “Why Oh Why” and “Ms. Marianne” the crowd made sure Levon left the Motor City with a few more fans than they arrived with.  Rolling Stone has named Levon as one of the “10 New Country Artists You Need to Know”. No surprise there.

Up next was the female-power trio, Runaway June, featuring the harmonies of Naomi Cooke (lead vocals and guitar), Hannah Mulholland (mandolin and vocals) and Jennifer Wayne (granddaughter of John Wayne) (vocals and guitar). The bright and upbeat trio performed a 30-minute set off their debut release album, Wild West. The crowd-pleasing performance was highlighted by the current hit single Wild West and the chart-climbing hit Lipstick. Rolling Stone has also named Runaway June as one of the “10 New Country Artists You Need to Know”. After seeing Runaway June live, the crowd tonight certainly agrees.

When 2017 CMA New Artist of the Year, Jon Pardi, finally took the stage, the “Pardi animals” that packed the house were ready to “Pardi”!  After a brief pace of the Fillmore Detroit stage, waving to his cheering fans, Jon and the band fired the crowd up with “Paycheck” off certified Gold-selling California Sunrise. It’s not often you can feel the energy from the crowd during the first song of the night, but Jon Pardi certainly made an exception.

Tonight was different because it was Jon Pardi doing the music his way. The classic country lyrics, but with a modern beat that kept the crowd on its feet throughout the evening.  First, it was crowd-pleasers “Cowboy Hat” and “Empty Beer Cans”. Next, Jon Pardi launched into “All Time High”, quickly followed by the self-proclaimed Motown cowboy romp, “Heartache on the Dance Floor”. The crowd inside the Fillmore was deafening; everyone in attendance was standing, singing each song back to the band word-for-word as they performed it. The raw emotion that the crowd was displaying continued through “Trash a Hotel Room” off Pardi’s 2014 Write You a Song.

As some of the band members left the stage for a “well-deserved breather”, Jon was left standing with his guitar at the microphone. As he began to play “Lucky Tonight”, another band member returned with a slide guitar and they playfully dueled back and forth. Moments later, the rest of the band returned to their familiar spots on stage to finish up.

The crowd appeared to be slowing down as the end of the 2-hour set of 18 songs approached. As Jon performed his latest chart-climber, a traditional country ballad “She Ain’t In It”, most in the audience seemed to settle back into their seats.  A true testament to the connection his music makes with the fans. Classic country, with a modern feel, the way Jon Pardi wants to play it.

When the band returned to the stage for their encore, the fans were expecting to hear fan favorites “Head Over Boots” and “Dirt On My Boots” both number-one hits across the country. Jon had other ideas for Detroit, though. Don’t get discouraged; those beloved songs would be played, just not quite yet…

As the band started playing their guitars softly in the background, Jon made small talk about his Ford Bronco back in California. As he speaks, the buzz of the crowd begins to grow as they recognized what the band is playing. When Terry, Jon’s lead guitar player, steps up to the microphone the crowd joins in right in with him:  “I was a little too tall could’ve used a few pounds, tight pants points hardly reknown”. Jon stepped up to his microphone and joins in… “She was a black haired beauty with big dark eyes, and points all her own sitting way up high.” Everyone in the Fillmore Detroit this chilly December night is standing, singing along: “Workin’ on our night moves, trying’ to make some front page drive-in news”.

As the cover of Detroit native Bob Segar‘s classic song “Night Moves” comes to the end, Jon Pardi knows what songs his “Pardi animals” expect to hear next. His top-hit, “Head Over Boots” and then the chart-topping “Dirt On My Boots” closes out the Lucky Tonight Tour stop in Detroit, Michigan. A unique country sound, Jon Pardi’s sound, capable of getting even the most devoted classic country fan to start singing along.

Tonight The Fillmore Detroit belonged to Jon Pardi and his fans who were “Lucky Tonight” to be there to hear his music; his sound played his way.

Jon Pardi is not your typical country artist in today’s modern world. Born and raised in California, he honed his sound in the West Coast’s honky-tonks instead of on the stages of Nashville. Instead of following current trends, he creates his own sound, his way. No programmed drums or hip-hop rhymes, instead he chooses to follow classic country styles. Old school country mixed with a modern-day flare. Music that will pass the test of time yet pays respect to the country artists that came before him. 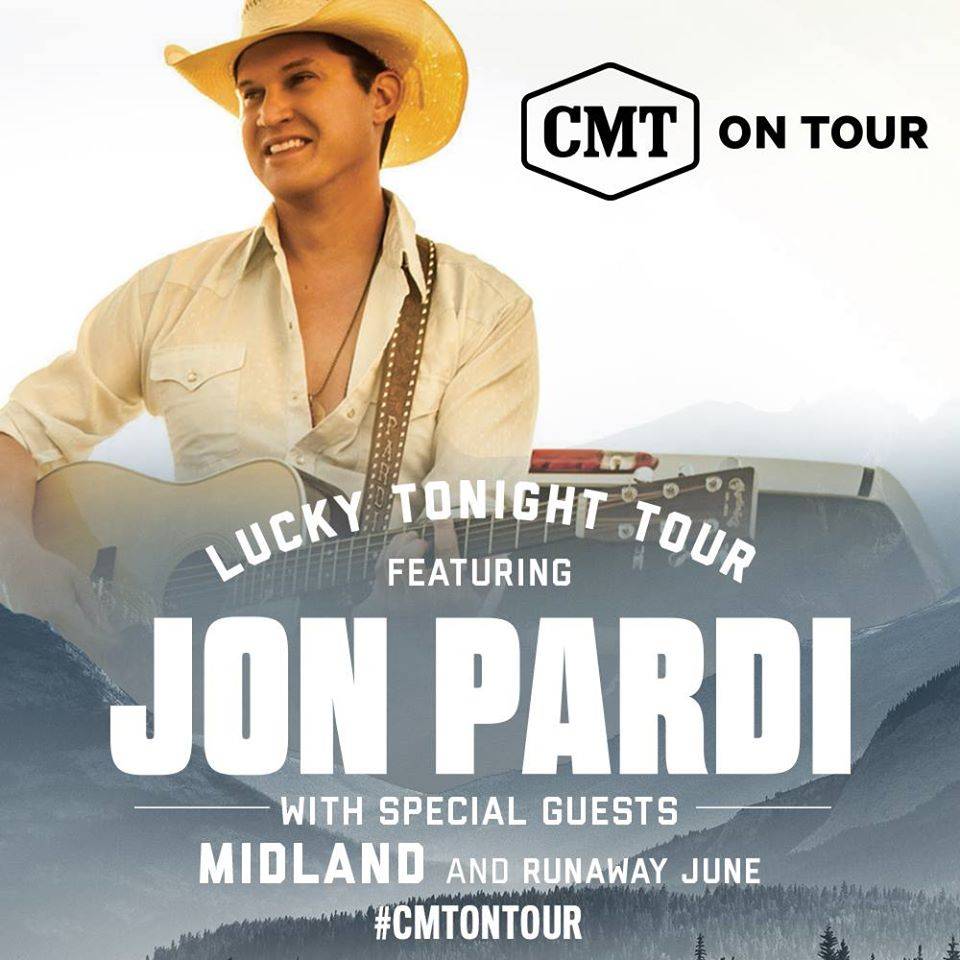