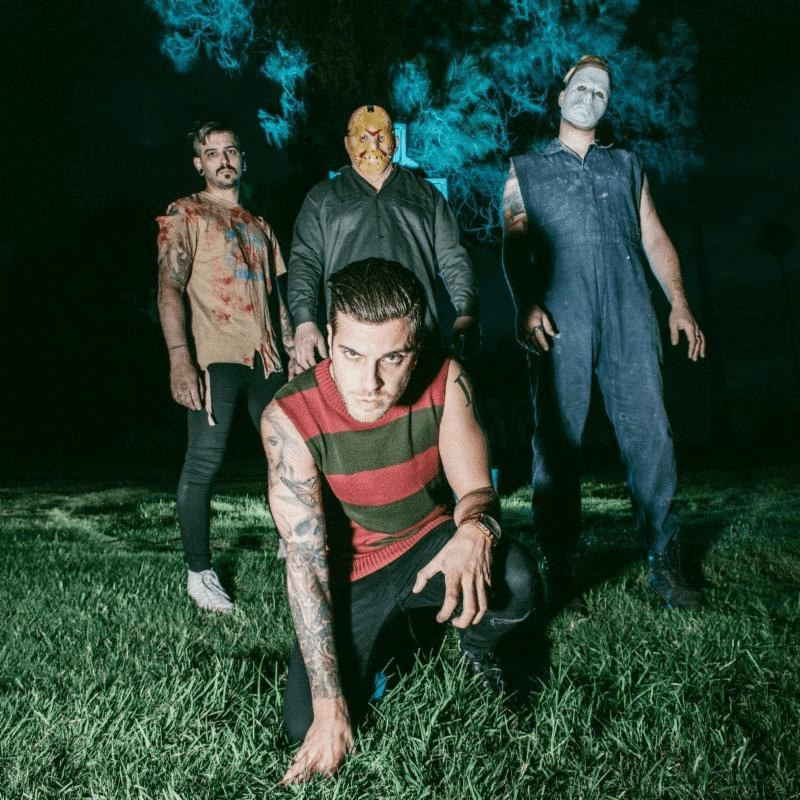 Orlando, Florida (July 25, 2019) – Earlier this year the hot up and coming metalcore band Ice Nine Kills was part of an impressive package tour that sold out venues throughout the country. Well, all except one. Unfortunately, that one venue is on Walt Disney property in Orlando Fl. Due to their love of horror movies and use of costumes and props from those movies, they were banned from that venue and their Florida fans didn’t get a chance to see them. Fast forward a few months later and Ice Nine Kills is out on their own, and they weren’t going to let their fans in Orlando down. So, The Soundbar became the lucky venue that would be packed with their fans.

As the capacity crowd waited patiently for the band that was deemed to dangerous for Disney, horror movie music was piped into the venue which just added to vibe that the band loves to create. With the stage decorated with props to match each member. As guitarist Dan Sugarman hit the stage he was dressed as Leatherface and you knew his mike stand as it had a chainsaw and body parts hanging from it. Fellow guitarist Ricky Armellino was dressed in a yellow raincoat like the one from the movie I Know What You Did Last Summer along with a balloon from the movie It on his microphone stand. Bassist Joe Occhiuti was dressed as The Crow and drummer Patrick Galante had a pig mask on. Finally lead singer Spencer Charnas hit the stage dressed in a half and half costume. Half of it was Freddy Kruger, while the other half is Jason Vorhees. From the second they hit the first notes from the lead off song “American Nightmare” from their hit album The Silver Scream, the place absolutely exploded. The crowd surfing and stage diving started immediately. To the delight of the crowd even Ricky Armellino got into the fun when he fell backwards into the crowd guitar and all. What away to start a show! The promise that this opening number delivered was easily matched as the night continued. Throughout the show, Charnas grabbed different props depending on the song. For the song “Merry Axe-Mas” he had on a Santa’s hat while wielding an axe. When they played their latest hit song from The Silver Scream “A Grave Mistake”, everyone was singing along word for word, just showing how popular this has become. Even though the packed audience and typical Florida summer temperatures meant it was hotter than hot, the guys in Ice Nine Kills gave everything they had and then some. Besides the heat, a certain mouse couldn’t even stop them this time around. But that didn’t mean that they couldn’t have fun with things. The band had someone dressed as the famous mouse and come out on stage. Of course everyone let the mouse know what they of him. That wasn’t the only fun, Spencer Charnas decided he needed to get out into the audience and dove right in, then crowd surfed around the venue while singing and he never missed a beat. The last song of the night was “IT is The End”. Just like every other song before they killed it, and yes that pun was intended.
Ice Nine Kills is definitely a band worth checking out live. They have a highly entertaining stage show that compliments the songs from their latest effort The Silver Scream. It makes for a very fun and high energy show. But don’t think this band is all flash and visuals. They are all talented musicians that above all else that sound great and play extremely well. So grab a ticket and get to one of their shows, you won’t regret IT.