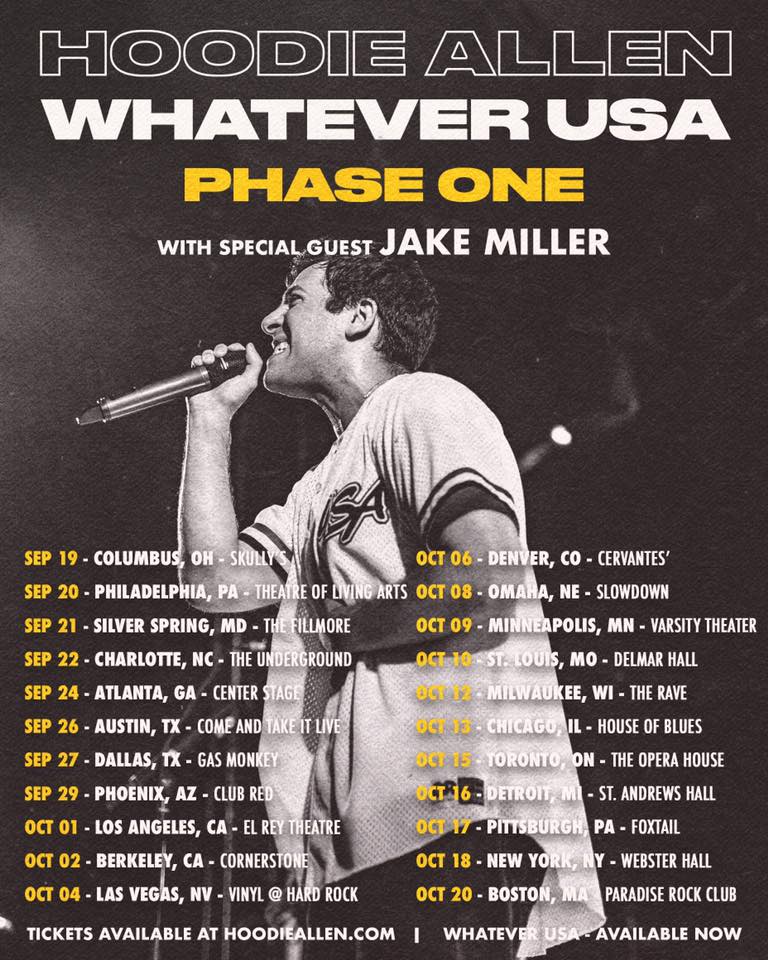 Detroit, Michigan (October 16, 2019) – Tonight, Hoodie Allen and Jake Miller packed the house at Saint Andrews Hall in downtown Detroit, MI for an epic stop on their Whatever USA Tour that no one would want to miss!

Kicking off the night, singer/ songwriter/ producer Jake Miller took center stage. Miller began gaining fame back in 2013 after the release of his debut album Us Against Them. In 2016, he toured opening for Fifth Harmony on their The 7/27 Tour and released his EP, Overnight. In 2017, he released his second album, 2:00am in LA, and in 2018 he released his third album, Silver Lining, both as an independent artist. By the end of 2018 he signed with Sony Records and released his EP, Based on a True Story, with them in March of this year before starting his Wait for You Tour. On September 19th this year, he released his latest EP, Summer 19. After watching his set tonight, it is no surprise as to why he has had so much success. By interacting with everyone the entire time, singing in the crowd a fan favorite “Lion Heart“, from his EP, Dazed and Confused, and singing a cover of the Killers’ “Mr. Brightside“, he stole the hearts of everyone in the room.

Next to the stage, Hoodie Allen. The 31 year-old rapper/ singer/ songwriter from Plainview, NY knew exactly how to keep the crowd going. He first stepped into the spotlight back in 2012 after he released his first EP,All American, debuting at number 10 on the Billboard 200. He followed the EP with his debut studio album, People Keep Talking, which was a total success reaching number 8 on the Billboard 200. In January, 2016 he released his second studio album, Happy Camper, and in 2017 his third album, The Hype. Over the years, he has collaborated with some of musics current biggest artists like G-Eazy, Ed Sheeran, Blackbear, and Fall Out Boy. Earlier this year, he released his fourth studio album, Whatever USA, where he featured some up and coming artists like Christian French, Gianni and Kyle, and Spencer Sutherland.

Tonight’s show just proved why he has been successful in the industry for so long. From his contagious energy and entertaining personality, he had the crowd in a trance the entire time. He sang some fan favorites such as “Champagne Pools“, and “Surprise Party“, both featuring Blackbear, and “No Faith in Brooklyn” featuring Jhameel. Just when you thought things were calming down, the second half of the show began. From crazy drum solos by drummer Jimmy Kadesch to throwing cake and crowd surfing in a raft, there was no calming the crowd. During this half of the show, he covered the classic NSYNC hit “Tearin’ Up My Heart” and ended with an all time fan favorite, “No Interruption“.

Overall, the night was a complete success. Although the Whatever USA Tour is almost over – follow Hoodie Allen and Jake Miller on their socials to catch them at a city near you!