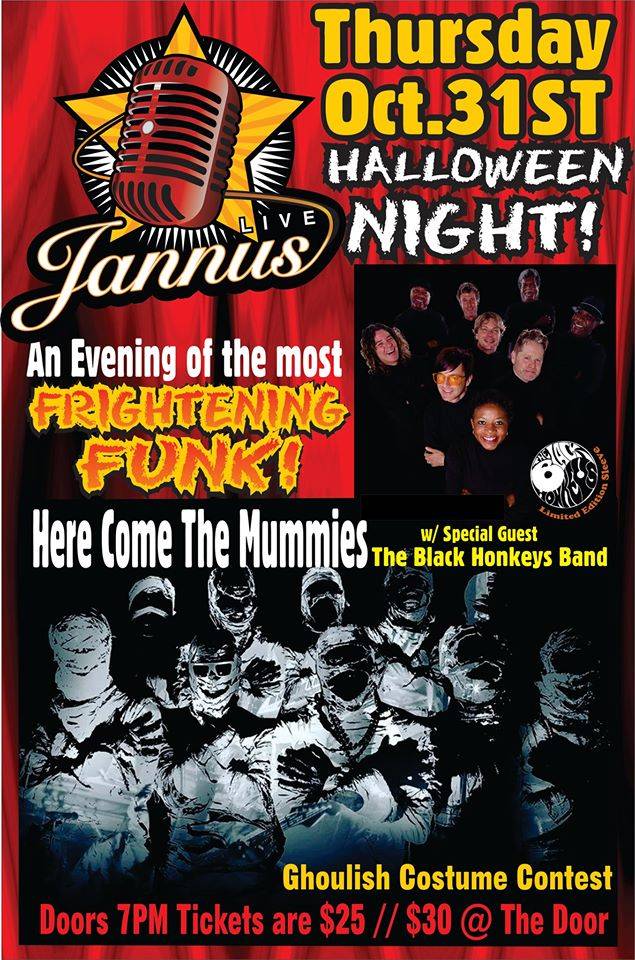 Halloween, it conjures up the thoughts of ghouls, ghosts and of course mummies. Tonight, at Jannus Live in Saint Petersburg Florida, the mummies have come to invade in a most Spooktacular fashion. That invasion comes in the way of Here Come The Mummies. When Here Come The Mummies takes the stage, you know there is going to be one hell of a Halloween party happening. With a reputation for an outlandishly fun stage show and incredible musicianship, when the Mummies roll into town everyone knows it’s going to be THE show to catch. Coming along for the ride on this Halloween night is a locally well-known band The Black Honkeys.
Parading towards the stage just as Here Come The Mummies do, The Black Honkeys are in full Halloween spirit. With the almost the entire band dressed in khaki outfits and hard brimmed hats they looked the part of archeologists at a dig in Egypt. The only exception was singer Nicole Simone, who was dressed as a Pharaoh. They were the perfect warmup band for Here Come The Mummies. Similar in style with a horn section and playing a lot of funk, Motown and rock they got the crowd going. Instead of people politely watching and waiting for the main act to come on, you could see people swaying and dancing to the music.

After the energetic set by The Black Honkeys, the crowd was revved up and raring to go for Here Come The Mummies. All eyes were on the stage waiting for them to come out. But nobody was ready for them to parade through the back of the venue dressed up in their trademark mummy outfits in drum line fashion while pounding away on LED lit up drums. It’s fun touches like these that makes shows like theirs that much of a full blown party. Once they got on the stage of Jannus Live, the drums were put down and the instruments were picked up, then the show kicked into high gear. Starting off with “My Party”, this energetic song definitely let anyone know within earshot that tonight was indeed their party. What a perfect number to start with! The song “Freak Flag” is a show unto its own. With every band member getting time in the spotlight to show the crowd how good they are at their craft, and of course two band members waving flags giant flags with “Freak” emblazoned on them, this song is a feast for the eyes and ears. Throughout the show, Here Come The Mummies owned the stage. Between their outlandish mummy costumes and their impeccable musicianship, they provided everyone in attendance the perfect Halloween show. “Shag Carpet” was a hoot. With half the band doing the worm on sections of shag carpet laid out on the stage, you had to love the joy and fun they brought to the stage. While no one knows the exact identity of all the Mummies, it has long been rumored that there are Grammy award winning musicians amongst them. During their classic song “Single, Double, Triple” Midnight Mummy and Mummy Yo both took turns playing multiple saxophones at the same time, showcasing mastery of instruments that only the best of the best have. They ended the raucous and highly entertaining night with confetti canons as they broke into “Dirty Minds”.

For those that are familiar with Hear Come The Mummies, you know what you’re getting, an incredibly entertaining and fun stage show, songs chock filled with double entendre, and of course some of the best musicians that are alive today. It doesn’t matter what type of music you listen to; this show is so fun filled that you have no choice but to have a great time.