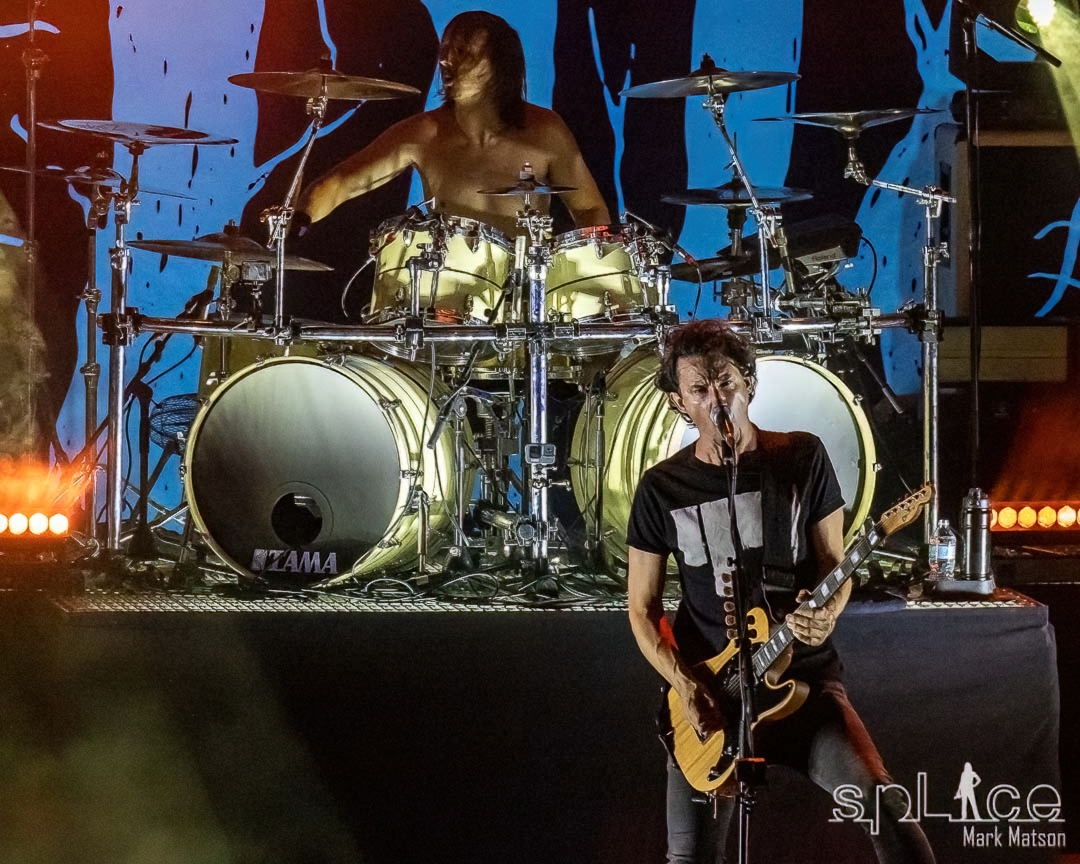 Three, two, one and the crowd lets out a the most brutally loud cheer that could shake the foundations of any building. Exercising this kind of pent-up energy is reserved for only the most special kind of occasions. Tonight, is definitely one of those nights. This evening Gojira, one of France’s finest exports, has brought their brand of heavy metal for the first time to the stage at Jannus Live. Supporting them on this tour is Knocked Loose and Alien Weaponry.

With the sun just beginning to set over the courtyard that is Jannus Live, it gave beautiful lighting of the venue without being overbearing. With a sold-out crowd still packing their way into the venue Alien Weaponry made their way to the stage. This three-piece band out of New Zealand features the De Jong brothers, Henry on the drums and Lewis is the guitarist/singer along with bassist Turanga Morgan-Edmonds. Infusing thrash metal with their Maori heritage, this trio put on a highly entertaining set. From the moment that Henry De Jong walked out and stood behind his drum kit and perform a Maori war chant through the rest of their time on stage all the way to the end of their time on stage, it was obvious that there were plenty of people that were there to specifically see them and their killer show.

Things were just beginning to get started. Next up was Kentucky’s very own Knocked Loose. This quintet has been building quite a following with their high energy shows. Made up of vocalist Bryan Garris, Isaac Hale on lead guitars, bassist Kevin Otten, drummer Kevin Kaine, and rhythm guitarist Nicko Calderon. From the second Bryan Garris and the guys hit the stage, it was obvious that their reputation was well earned. Right from the beginning, the crowd just fed off of the energy and mosh pits opened up and the crowd surfing kicked in. Over the course of their thirteen-song set, they delivered a high-octane performance that never backed off or faltered for a single second.

With a giant curtain placed in front of the stage to shield curious eyes from what would be in the coming show, a countdown was projected on it as well. As it descended from 180 backwards, you could feel the tension and anticipation building in the absolute capacity crowd. When it got down to ten, all you could hear was the crowd counting down. When it hit one, Gojira launched into “Born For One Thing”. With the band being back lit, you could see them through the curtain creating a very cool image. Finally, the curtain dropped and there they were. Joe Duplantier was center stage while guitarist Christian Andreau and bassist Jean-Michel Labadie flanked him on either side while drummer Mario Duplantier was up on a riser that stretched the length of the stage. As they tore through the opening number, they displayed the raw power and precision that has drawn their fans to them.

While the band has a relatively new release in Fortitude, for tonight’s show they dug deep into their catalog and rewarded everyone with a diverse amount of music from across their career. Playing “Backbone” and “Flying Whales” from From Mars To Sirius and “Stranded” From Magma gave the newer fans in the audience a taste of some of their earlier material. Joe Duplantier kept delivering everything with a snarl while machine gunning riffs out of his guitar. Jean-Michel Labadie was performing all sorts of acrobatics with his bass guitar. As always Joe’s brother Mario was absolutely on fire behind his drum kit. He showed everyone exactly why he is considered one of the best drummers on the planet today.

At one point during the show, Joe Duplantier thanked everyone for showing up. In a nod to Slipknot playing not too far away in Tampa, he acknowledged them and how they had played on the previous Knotfest tour and how much they enjoyed the experience. But he went on to say that how much better it is playing on their own tour. With a sly smile on his face, he said to everyone thank you for making the right choice and showing up here and for stealing two thousand tickets from them.

New songs “Grind” and “Amazonia” off of Fortitude really hit home with fans. With pits going full steam and crowd surfing going on everyone there was living in the moment and lost in the music. For more than just a moment you could sense that the events of the past year and a half weren’t even a distant memory. Joe Duplantier asked everyone if they could sing along and instructed everyone on what he wanted. Then they launched into “The Chant” and at the appropriate time everyone joined and took over. At that point, the serious demeanor that Joe wore all night melted away as he beamed at how everyone responded to his song.

The final song of the night was “Vacuity” from their fourth album The Way Of The Flesh. As with every song they played so far, they delivered it in a bone crushing intensity that can only be witnessed live. While on most nights, after the final number the band will bow or take a picture with the audience in the background. But tonight, Mario Duplantier came to the center stage mic usually reserved for his brother Joe and let the audience know it was his brothers birthday today. With that the packed audience cheered loudly as seemingly everyone in earshot of the venue wished Mario a happy birthday.

What a night of music all three bands delivered. From Alien Weaponry to Knocked Loose they only built things up and energized the crowd. But it was Gojira that truly showed the sold out audience just how powerful and important music can be. This is easily one of the best shows of the year and if given a chance to catch Gojira, do it under any circumstance.