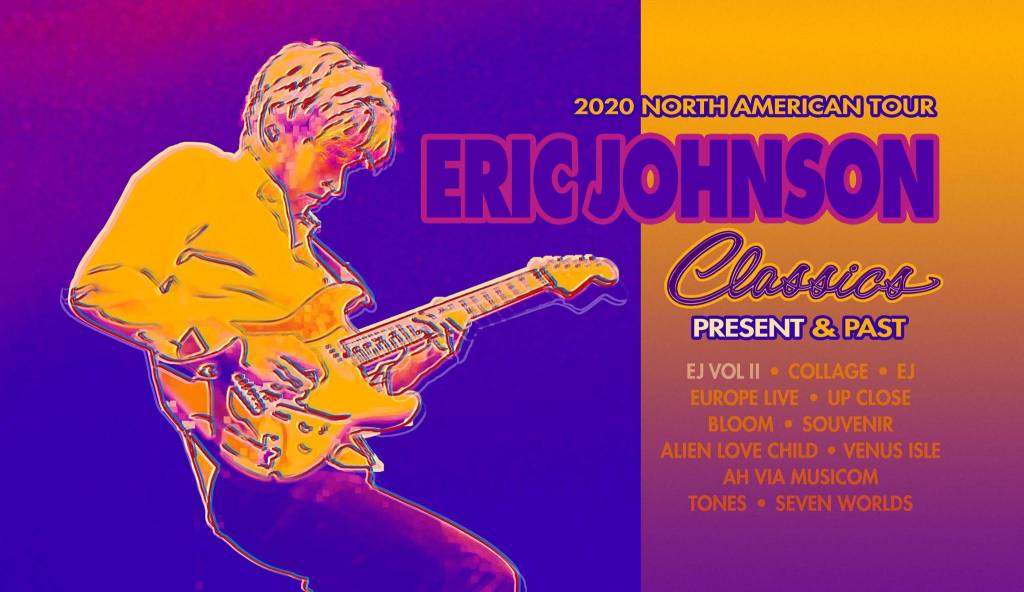 (Austin, TX) – January 8, 2020 – As another decade turns, the Austin, TX based prolific guitarist, vocalist, composer, and multi-instrumentalist – ERIC JOHNSON – will release a new studio offering titled EJ Vol II, on February 28, 2020. To celebrate this 11th studio album, JOHNSON has a 55-date tour, spanning nearly 3-months. The tour will hit every major city across the U.S. and will also enter into Canada, for one show in Toronto as well.

EJ Vol II follows its predecessor from 2016 which was simply EJ, an all-acoustic collection of songs which showcased nine original compositions and four covers. JOHNSON’s approach was deeply honest, intimate, personal and delivered with organic emotion. With EJ Vol II, he presents new repertoire that combines electric and acoustic arrangements and once again represents a collection of originals with a couple of select covers.

Among the new songs, there is deep meaning and messaging with each track, sometimes figurative while at times literal. On “Waterwheel,” he captures personal feelings about the gift of the flow of the spirit and synchronicity of all things under the universe in creation, utilizing the water wheel or an old paddle wheel that turns in water as the metaphorical symbolism. The song “Golden Way,” approaches finding the true higher path in life, while the poignant “For the Stars,” captures his introspection surrounding the loss of his mother as he looks up towards the sky at night wondering where she is now. Along with the 11 original songs there are two covers on the album; The Beatles “Hide Your Love Away” and Eric’s arrangement of Bert Jansch’s take on the traditional “Black Waterside.” The latter was first recorded in 1966, but became infamous through Jimmy Page performing a similar riff on Led Zeppelin’s 1969 debut without acknowledging the credit (on “Black Mountain Side”).

The new year will also see the release of a new Fender Stratocaster as a part of their “Stories Collection” (modeled after an instrument JOHNSON frequently used early in his career). This model will be his fourth in the Fender collection of signature Johnson guitars.

Over the course of more than four decades, ERIC JOHNSON has been traveling on a prolific odyssey. Along the way, his creations have cross pollinated the various musical genres which include rock, blues, jazz, fusion, soul, folk, new-age, classical and even country. Inevitably E.J. says it best himself in sharing that regardless of the genre “It really boils down to the music and the song at the end of the day,” he explains. “If it doesn’t have that it gets boring for me. The most important thing for me is to grow musically and make a more expansive and meaningful artistic statement with every new project.”

Among JOHNSON ‘s many accolades are a Grammy award for “Cliffs of Dover ” (a track from his Platinum certified Ah Via Musicom), lifetime induction into the Guitar Player Gallery of Greats, his listing among the “100 Greatest Guitarists of the 20th Century” by Musician. In his hometown of Austin TX, a city full of guitarists, the readers of the Austin Chronicle have voted ERIC JOHNSON the city’s “Best Electric Guitarist” and “Best Acoustic Guitarist” in their yearly poll year after year. They also named him “Electric Guitarist of the Decade” and one of the top five “Musicians of the Decade”.

Throughout his career, Johnson has approached music as a healing force, a way to enhance a listener’s consciousness and conjure joy and inspiration. “That’s what I’ve always appreciated most about other artists,” he says. “Some artists inspire us to wake up and get back to the clarity of consciousness. With this record, I’m trying to do that too, because I appreciate it so much in other people.”