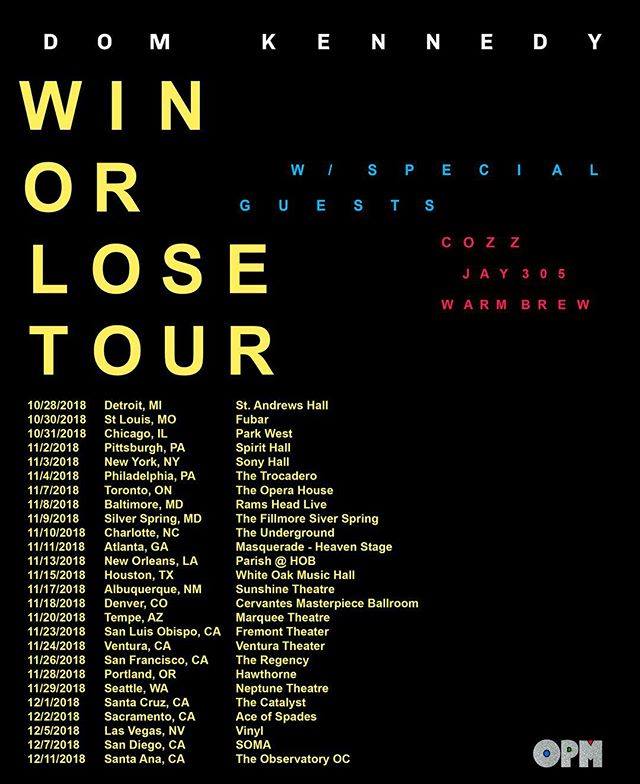 San Diego, California (December 7, 2018) – On Friday December 7th, two interesting things happened at the legendary Soma in San Diego, Ca. First thing was that the Dom Kennedy’s Win or Lose Tour made it stop in San Diego with the likes of Cozz, Jay 305 and Warm Brew serving as opening acts. The second thing that happened was, that in the first time since I’ve gone to concerts, I would experience my first independent hip hop show, there is a reason for this tough and its mainly that I’ve never been too attracted to it, not that there’s anything wrong with it, I’ve always been more of an alternative music type of guy, although one of my favorites albums happens to be “My Beautiful Twisted Dark Fantasy” by Kanye West and yes, I find the irony in that, still, I went to the show with high curiosity of what to expect of it.

Starting of the night was LA’s own Warm Brew, with their new album “New Content” up their sleeves, the trio made sure to let everyone know they’re not playing around as far as live shows go.

Next up was Jay 305, who brought the crowd up to what would become an epic twerking contest, maybe hold up on the epic part, after all it was my first time seeing a twerking contest, but as far as it goes, they do take it pretty seriously.

Shortly after leaving, Cozz took the stage raging from one side to another, with nothing but a DJ, Cozz made sure everyone knew he was business and people did not hesitate to respond to that, by now the crowd was more tan ready for the main event.

Only a bottle of champagne and a mic stand was all the props needed to welcome Dom Kennedy to the stage, promoting his latest álbum “Number Two”, from start to finish the crowd gave itself up to the rhythm and the beats that took the main stage on the closing act of the night, Dom gave the love back by giving a crowd pleaser set to what one could witness, even taking the time to welcome Warm Brew for a collaboration song to conclude the night.

At the end it would be unfair to judge a show of a music gender that I don’t really listen to by the music itself, it was an enjoyable show, there was a lot jumping, a lot of dancing, low lighting which is also fun to shot with, and of course there was a new experience which will always be more than welcome.

Review and photos by: Daniel Castro