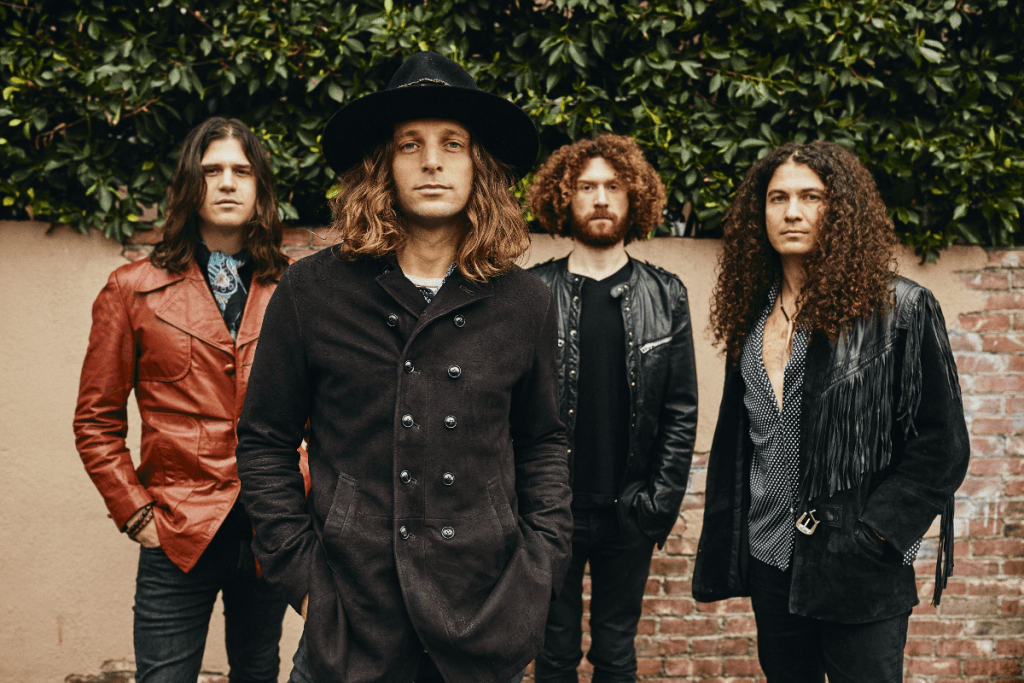 It’s Friday night in Destin Florida, a vacation spot known for its warm turquoise gulf water and sugar fine sand. Instead of the crowds heading to the beach for some evening antics, tonight, Club LA is the ultimate destination spot. What could possibly draw people away from the gorgeous beaches of the panhandle? How about the hottest young rock band on the planet, Dirty Honey. Joining them tonight would be fellow rockers and Californians Joyous Wolf.

With the crowd finally in, things were getting restless as its been a long while since most folks have had the opportunity to see a proper rock show. But once the lights dimmed, the energy level became palpable.  People were beaming from ear to ear that they were going to actually see some real live music. As Joyous Wolf made their way to the stage there was a sense of relief that this was really happening, and things wouldn’t be postponed or cancelled due to one reason or another.

Before the band even played a note, lead singer Nick Reese explained to the audience that they had barely arrived on time due to their vehicle being towed away. There was no need for any apologies or worrying about the abbreviated soundcheck. From the first note of “Fearless”, the first song on their setlist, they were great. Through out their part of the show they wowed everyone with their high energy up-tempo blend of rock music, and when it comes to high energy, Reese has that in spades. During the show he was doing cartwheels, splits, spins, you name it he did it! During the last song he motioned for the audience to move to either side of the floor. When the center finally opened up to his liking, he promptly dove out and performed more of his patented acrobatics. This is definitely a band that is on the rise and people should take notice of.

Finally, it was time for Dirty Honey, the band that Revolver Magazine called one of the top five bands most likely to breakout in twenty twenty, as well as the only unsigned band to ever top the charts, to take the stage.  With their eponymously titled EP, as well as their very first full-length record Dirty Honey under their belt, tonight all the fans would get a chance to hear their favorites, as well as the band’s latest music. As singer Marc Labelle hit the stage along with his band mates John Notto the guitarist, Justin Smollian on bass, and drummer Corey Coverstone everyone in Club LA let them know how happy they were to see them live and in person.

The band quickly launched into “Gypsy” off of their new album. What a number to not only kick off the show, but also introduce folks to some of their new material. Just like the opening line from the song “I roll in like a desert wind”, Dirty Honey blew in with all the power of a red-hot gale force wind. They quickly followed things up with “Break You”. Just two songs in on the night, and to the uninitiated you would think that with the swagger that they brought to the stage, they were a reincarnation of Aerosmith and the Stones at the height of their careers.

Throughout the night, they gave the music starved fans heavy does of both of their albums.  Of course, fan favorites “Heartbreakers”, “Down The Road”, and their latest single “California Dreamin’” were played to perfection. During the show, Marc Labelle asked the audience which they would rather hear, an Aerosmith Song, or an AC/DC song. With the crowd cheering wildly for both, they finally cheered a bit louder for AC/DC. With that, the band launched into a raucous version of “Girl’s Got Rhythm.”

Dirty Honey has been building a reputation for putting on an unapologetic, unabashed, honest to goodness rock n roll show. One of the hallmarks of the classic rock concert is the solo. That time where each band member got a chance to strut their stuff. Tonight, everyone got their turn front and center.  Justin Smollian was up first and wowed everyone with his incredible bass playing.  Next up, drummer Corey Coverstone showed off his drumming skills, all the while a light show was lighting up him and his kit beautifully. Finally, John Notto came out on stage armed with his trusty Les Paul guitar and promptly burnt up the fret board.

The last two songs they played were “When I’m Gone” and “Rolling 7’s”. What better way to close out a show than with the song that blasted them to top, and one of their early big hits.  With Labelle belting out the lyrics like a full-fledged rock star, and Notto shredding things up, the crowd was worked into a fever pitch. While Dirty Honey may be a relatively new band, they certainly know the perfect way to end a concert.

If there ever was an ideal way to spend a Friday night, this show was it. From the unbridled energy, and great songs of opener Joyous Wolf, and Dirty Honey with their larger-than-life performance that would be at home in an arena, this was a concert for the ages. Certainly, there is a lot of hype surrounding Dirty Honey. With performances like tonight’s, they did more than just live up to it, they blew it out of the water. With bands like these, rock n’ roll is not only back, but its future is indeed quite bright.