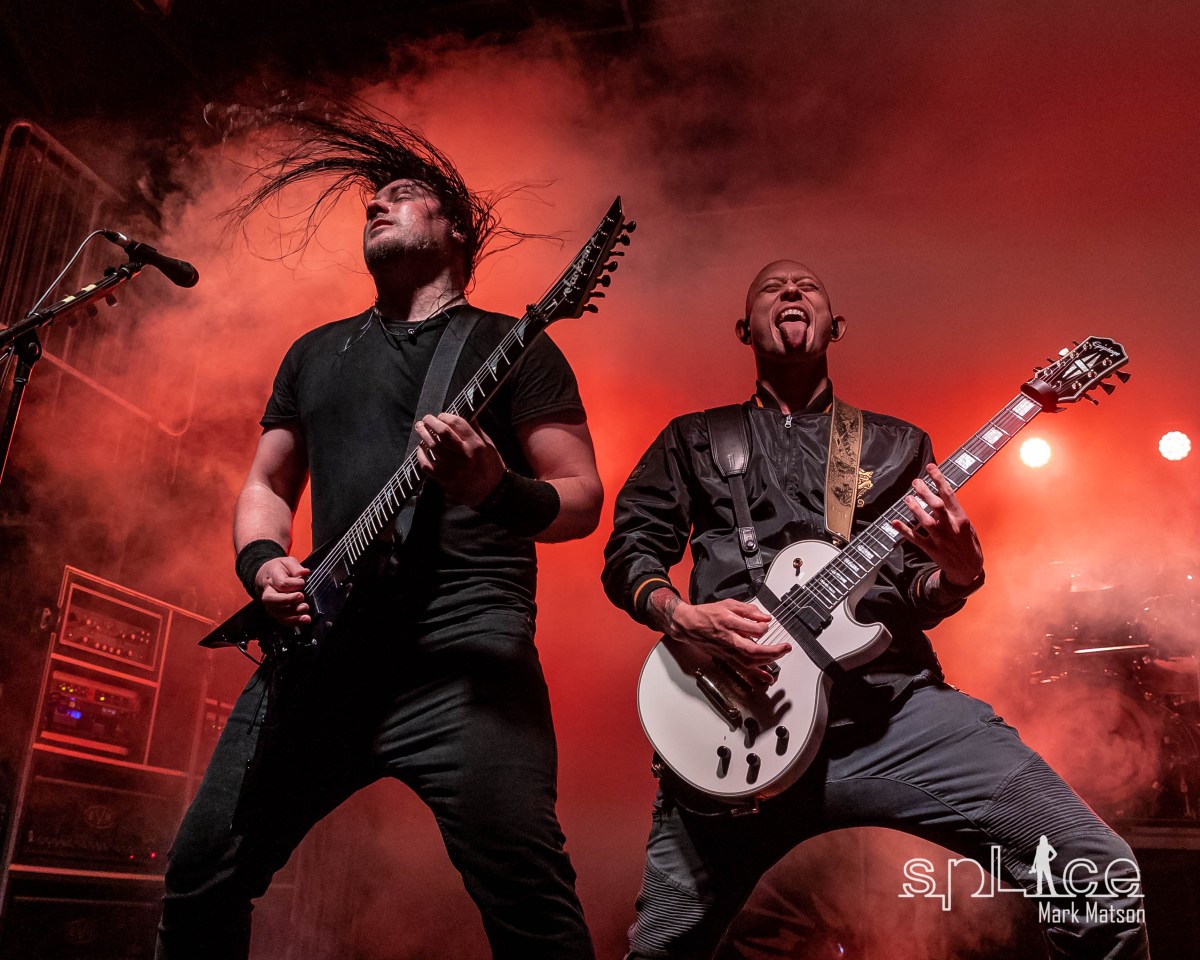 It’s a warm Friday night in Tampa Florida and a large crowd is building outside of Coppertail Brewery, a trendy watering hole known for great food and even better drinks. What’s going on? Are they introducing a new IPA or a stout? Nope, the owners have decided to put some extra zip on a Friday night and throw a concert. While Tampa may be a hot bed of local bands more than willing to strut their stuff. The owners decided to go big, and somehow managed to get one of the bands that are performing on the Metal Tour Of The Year to grace the stage there. Tonight, Trivium swung into town to play an intimate show for all their local fans.

Yes, Orlando Florida’s best export to the music world decided to take a break from getting ready for the second leg of the Metal Tour Of The Year. So, they packed up some of their gear from the hangar and shot down Florida’s infamous I4 for this unique one off, sort of hometown show. While Coppertail Brewery isn’t known for hosting concerts, they put together a great stage setup in the back area of their property. While it has been a long while since the guys in Trivium have played such a small show, this just added up to make this a truly unique one off event.

After the sellout crowd was ably warmed up by several local bands, everyone there was wound up and like a clock spring and couldn’t wait another second to see their favorite band. After all it’s not often to see a band this big in such a small venue. With the stage dark, everyone knew the show would be starting as “X” from their latest album In The Court Of The Dragon was being played on the PA system. Finally, Alex Bent made his way to his drum kit and the crowd let out a cheer so loud you’d think this was a stadium show. Smoke started being pumped onto the stage to help create ambience. When the rest of the band made it onto the stage they exploded into “In The Court Of The Dragon” off of their latest album of the same name. From the second they started; you knew they brought their A+ game. They would not be taking their foot off the gas just because it’s a small show.

After thoroughly thrashing the crowd with their first song, the band hit everyone with another musical gut shot in “Like A Sword Over Damocles” also from their latest album. When they finished up the song, guitarist and singer Matt Heafy said to the crowd “When three dads and one party guy get the call to play a brewery with insane beer, insane food, and incredible people, all we could say was hell f*cking ya” of course everyone loved that and let him know. They quickly launched into “Beyond Oblivion”. What was quickly becoming obvious was the band really was digging the small nature of the show. There seemed to be some extra fire in everyone in the band tonight.

If you asked most of the crowd what they would be playing tonight, most would stick to the usual stuff on their set lists peppered with songs from their new album. But the band decided to sprinkle plenty of surprises into the night to give their diehard fans a real treat. In one of the funnier moments of the show as they were getting ready to play a song, Matt announced the wrong song as his band mates looked at him quizzically. He quickly corrected himself and laughingly said “we’ve got kids and have been up since 5:30”. For the first time in a decade, they played “Chaos Reigns”. If you were one of the lucky few to score this ticket, you also got to see them play several other songs for the first time. They included “A Crisis Of Revelation”, “The Ones We Leave Behind”, and “Sickness Unto You”.

Just like any other Trivium show, they never let the energy level down throughout the entire show. If there was ever even a passing notion of one person in the crowd slowing down Matt Heafy would grab the crowd and get them back into things one thousand percent. Just before playing “What The Dead Men Say” Matt admonished the crowd by saying “If you leave here with any shred of a voice left you have severely f*cked up” and right on cue everyone let out a scream that made sure that more than one person couldn’t talk the next couple days. Later in the show he also let the packed house know that “if you leave here not reeking of Trivium you have also severely f*cked up”, and just like before more than one voice got blown out for the next couple days. With the crowd still cheering what he said, the knocked it out of the park playing their classic song “The Heart From Your Hate”.

After the band finished up “Capsizing The Sea”, everyone took a couple second break off stage except for Matt. He walked up to the mic with just a beer in his hand and said, “I never get to do this, but I also never play a brewery” and he cracked it open took a sip. He thanked everyone and of course Coppertail Brewing for putting on the show.  He told everyone that this was the last song of the night and they needed to get down low, of course everyone did that. He said they could get back up when he said two words “In Waves”.  With that the rest of the band came back out and launched into that very song. When Matt screamed out In Waves, everyone shot up like a rocket. The energy that Trivium put out on the stage at that point was just incredible and the crowd completely fed off of it making the last song of the night a memorable experience.

What a great night of music that the folks at Coppertail Brewing put together. For the lucky few that managed to snag a ticket to this one off show got a chance to see Trivium in a small venue at the peak of their powers. This night also showed just how much the guys in Trivium love their fans. It’s not often that a band this big would go back to their roots just to give their diehard fans a special treat.   If tonight’s show is any indication of how well Trivium is playing, when they hit the road with The Metal Tour Of The Year, they may very well steal the show.