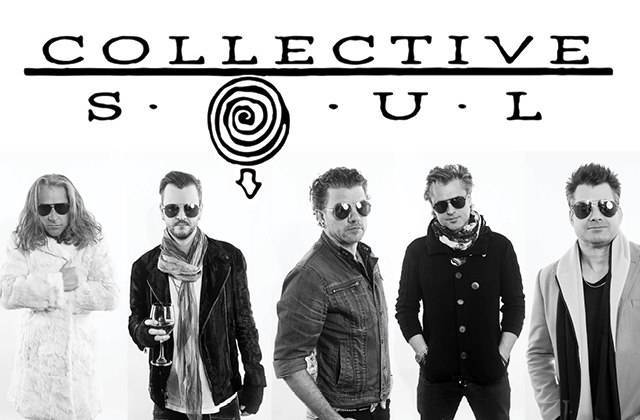 Orlando, Florida (November 22, 2019) – Most bands dream of having a twenty five year career. Fewer achieve that lofty goal, and its rarified company when a band gets there with tons of instantly recognizable hit songs and new material out as well. Collective Soul rightfully belongs in that rarified company. With their first self-titled album coming out way back in nineteen ninety five and their latest effort Blood currently out now, stacked in-between has been a load of hit songs. What better way to celebrate this incredible accomplishment than to share it with their fans by having a tour. This time around, the focus would be on Collective Soul only, there would be no opening acts.

Right up to show time people were packing into every spot they could at The Hard Rock Live in Orlando, Florida. The crowd was well behaved, but you could tell they were anxious for the show to start. As everyone was waiting, all eyes were on the simple stage setup. It consisted of a large yet tasteful backdrop bearing the bands name and drummer Johnny Rabb’s kit centered beneath it and a piano off to the side at the front of the stage. It gave you the feeling that tonight’s show was going to be about the music and not rely on over the top pyro or other theatrics. As the band made their way on stage to a huge cheer, everyone took to their stage spots with lead singer Ed Roland sitting at the piano for their first number “Observation Of Thoughts” from their latest album Blood. From the very first note, it was obvious to everyone that Collective Soul still sounds amazing. Ed Roland’s timeless voice still carries the same passion and charm that it always has. Without a doubt the rest of the band sounded equally as great. What a nice way to introduce this beautiful mid-tempo song to their fans. When guitarists Jesse Triplett and Dean Roland kicked off the instantly recognizable intro to “Heavy”, that’s when the already cheering crowd exploded. As Ed Roland came out from behind the piano, everyone got a good look at the eclectic well-tailored red suit he was wearing along with the cowboy hat he had on. Of course, he pulled off that look incredibly well as only a lead man can. As he sang, he would take frequent trips right to the edge of the stage and get on one knee thanking all the cheering fans for the love they were showing him. They followed that hit up with yet another one when they played “Why Pt. 2”. Watching Ed Roland perform all these songs is a joy to behold. He is the consummate showman. Throughout every song he had a willing dance partner in his mic stand, as well as striking a dramatic pose at just the right moment.

During a rousing performance of their mega-hit “Shine” Ed Roland casually walked to the front of the stage, took off his cowboy hat and placed it on the stage. He then went back to singing and surprisingly unleashed a huge jump without missing a beat. Not wanting to be left out of the party bassist Will Turpin joined in and got big air when he jumped off the riser he was standing on. While this night would contain many of their hits, they didn’t forget about their new album Blood. So, once again they dipped into that album and pulled out a rocker “Over Me” to keep the energy up and dancing going. At one point during the show he pointed out a kid in the audience and asked “How old are you sport” to which the kid replied seven. Ed said he wanted to have him come back and party on the tour bus afterwards. Everyone thought it was fun banter, but when Ed Roland brought the tour manager out on stage to give him and his parents a pass everyone cheered at that super cool move. As a crew member handed Ed an acoustic guitar they quickly launched into rousing versions of “Precious Declaration” and “December”. He kept the acoustic strapped on for “Right as Rain” during this song he was jumping around and at times nose to nose with his brother and band mate guitarist Dean Roland. With both wearing a huge smiles, you knew that they were enjoying every second of their time on stage.

Ed Roland then took a few minutes to talk about the next song “She Said”. He related the story about how they were going to put it on one of their earlier albums but wound up forgetting about it. However, they managed to revive it for the movie Scream Two and it’s soundtrack. Of course, they played a beautiful rendition of it. Later on, Ed Roland talked a little bit about the origins of the band and coming from the Atlanta Georgia area and said there was another band from near by Athens Georgia that they loved and wanted to play one of their songs. From the starting notes, everyone knew instantly that R.E.M.’s “The One I Love” was up next. What a performance of this song they put in. It’s never easy to nail the nuances of an iconic song like this, but they hit it perfectly. Ed Roland captured the feel perfectly, and of course the rest of the band was equally amazing. As all good things must come to an end, the band chose “Run” to be the final song of the night. With Ed Roland playing his acoustic guitar and Dean Roland moving over to the piano, they played a moving version of the song to the standing ovation of everyone in the venue. As the band put down their instruments to come to the front of the stage to bow and thank all the fans, the only exception was Ed. He kept strumming the guitar part of “Run” while the audience kept singing “Have I got a long way to run”.

As all the band members made their way off stage you could barely see them just off the side of the stage, but they were huddled up and still singing and hugging. It’s moments like that, that let you know how they have done so well over the years. They are more than a band; they are a brotherhood that truly love what they do and each other.
After twenty five years there is no slowing down Collective Soul. From their early hits to the new songs from Blood that were showcased tonight, they demonstrated to all the people packed into The Hard Rock Live how relevant and talented they are to this day. If you are a fan of Collective Soul, this concert is an absolute must attend event. This way you can truly experience just how breathtaking they are live.