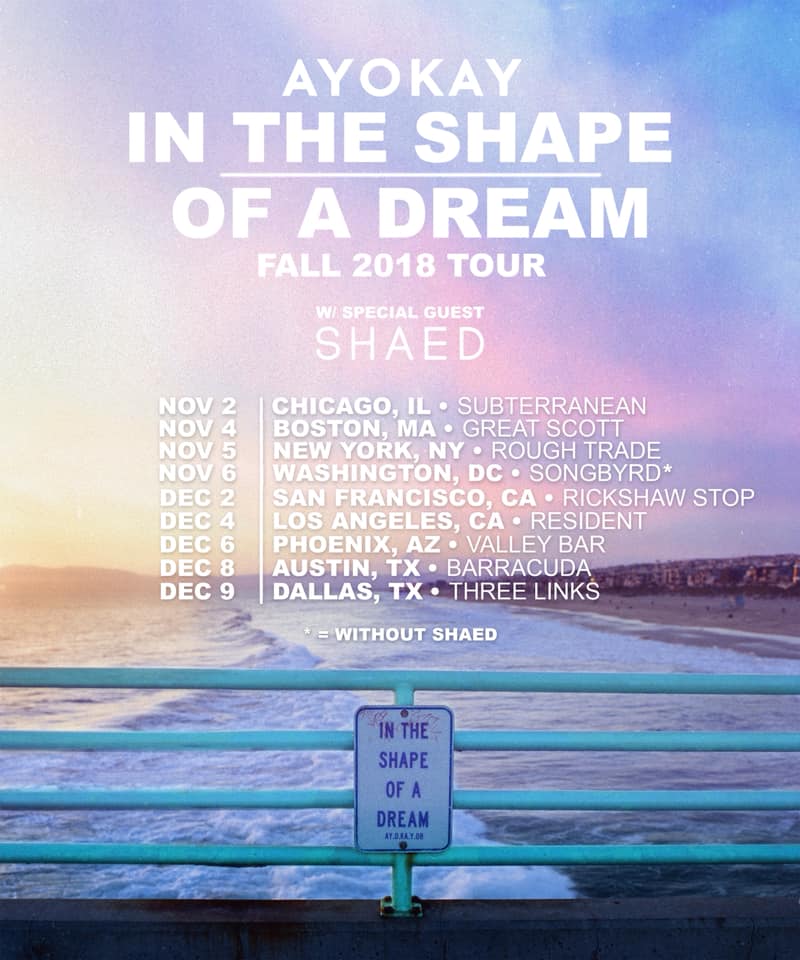 Chicago, Illinois (November 2, 2018) – Tonight, Subterranean in Chicago, IL hosted the first show of Ayokays first headlining tour, In the Shape of a Dream, with support from Shaed, completely selling out!

Opening up the night is trio family band, Shaed. With members Chelsea and twin brothers Max (best friend of Chelsea) and Spencer (husband to Chelsea), the D.C. based Alternative band has caught the ears of many. After the release of their first single “Just Wanna See” in March of 2016 they released their second single “Thunder” that went viral, and by September 2016 they released their debut EP, Just Wanna See that included both songs. After the release of the EP, it was followed by tours where they supported Marian Hill and Bishop Briggs. In 2017 they released another single “Too Much” and by May of 2018 they supported the X Ambassadors on tour. In September 2018 they released their second EP, MELT and now joining Ayokay on the In the Shape of a Dream Tour. Their set was nothing short of stunning. Their unique sound mixed with power house vocalist Chealsea’s voice filled the room and everyone was absolutely amazed! Their set included lead single from the MELT EP “Trampoline” and a fan favorite from their first EP, Just Wanna See, “Perfume”.

To end the night, the man of the evening took the stage, Ayokay. Alex O’Neil, also commonly known as Ayokay is a DJ/producer recognized for his EDM influenced by different genres such as pop, hip-hop, and R&B. The Michigan native that is currently based in Los Angeles, California began creating music in high school with his friend Mike Temrowski, also known as Quinn XCII. In 2016 they released the single “Kings of Summer” that caught the attention of Texas Rangers outfielder Ian Desmond and became his walk-up song. From there, the two got a deal with Columbia Records and both careers have continued to grow. Since then he has released a number of singles and a few remixes, his most recent release being his debut album “In the Shape of a Dream” that came out on August 31, 2018. With his fresh, fun, and upbeat sound, it is no surprise as to why his shows are selling out. His performance was nothing less than incredible and a full out party. From smilies on everyones face to constant dancing, the crowd had the time of their lives and a night to never forget. His set included songs “Swing Swing” from his debut album, a mashup of hit song “Roses” by the Chainsmokers and “Summertime Sadness” by Lana Del Ray, and ended the night with my personal favorite and a fan favorite “Kings of Summer”.

Click here to get tickets to a show near you!