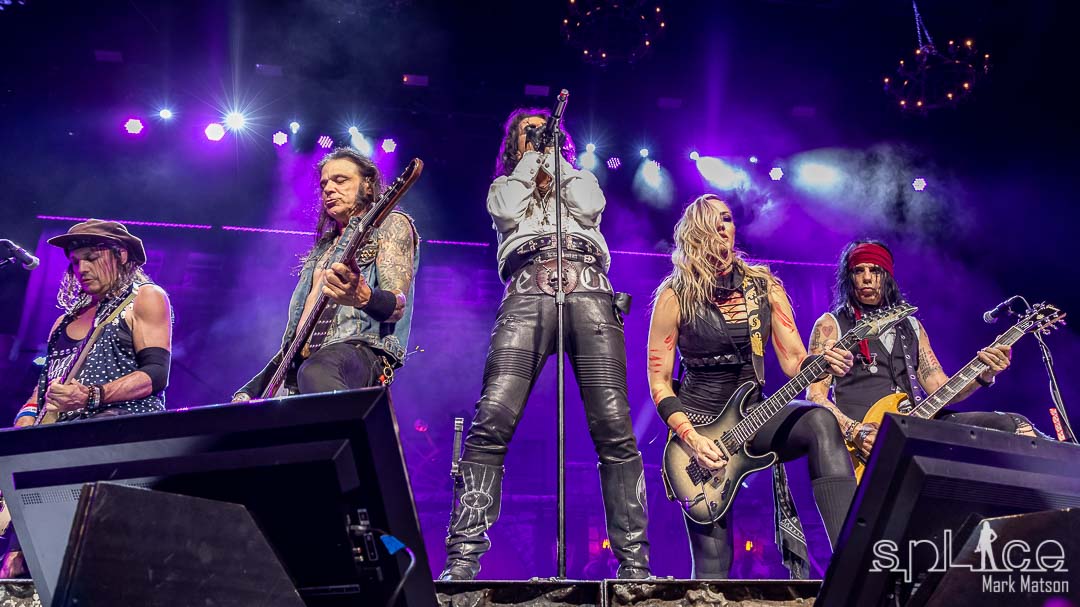 Alice Cooper. What more could possibly be said about him. With a nearly fifty-year career and countless hits as well as movie appearances, he has outstripped his roots in the music industry and become something of a cultural icon. As the godfather of shock rock, his over-the-top performances have earned a reputation for being truly unforgettable. So, when Alice comes to town it transcends into the realm of a must-see event. To make tonight’s show at the MIDFLORIDA Credit Union Amphitheatre all that more special, Alice tabbed Ace Frehley, the original guitarist for Kiss to kick off the show.

As one of the founding members and guitarist of the iconic band Kiss, Ace Frehley has played a part in some the most well-known songs in rock n roll. On this night he would show the audience that the Spaceman could still bring it. With a set heavy on classic Kiss songs such as “Parasite”, “Strutter”, and “Detroit Rock City” he showed that even at 72, he could still rock out with the best of them. He didn’t forget about fans of his solo work as he also fit in “Rip It Out” and his brilliant cover of “Back In The New York Groove”.  Ace definitely put on an entertaining show with his mix of material. For those that were smart enough to get there early, they got to see this icon on stage.

Finally, the curtain dropped exposing a spooky castle, which is very fitting as this is Alice Cooper after all. With his band members already on stage, They whipped into the opening notes of “Feed My Frankenstein”. At center stage of the castle the door placed there swung open and out strutted the man of the hour, Alice Cooper himself. He was decked out in his top hat, leather pants, steam punk jacket, his cane and of course his trademark eye makeup. Alice swaggered back and forth across the stage belting out the song and sounded great in the process. Without skipping a beat, he launched into “No More Mr. Nice Guy”. This would be one of the many of his classic songs that would turn into a giant crowd sing along.

With a career as long and storied as Alice Cooper’s, of course he had plenty of hit songs to highlight. Whether you are a new fan or have been following him for years he performed songs seemingly every knew. Whether it was newer material like “Hey Stoopid” or “Poison” all the way to his early hits such as “Billion Dollar Babies” and “I’m Eighteen” there was something for everyone. As Alice Cooper has just released a new album Detroit Stories, he even managed to sneak a couple of songs from it into the jam packed setlist. The songs he chose to perform were “Go Man Go” and a cover of the Velvet Undergrounds song “Rock & Roll”.

Throughout the performance Alice Cooper lived up to his reputation for over-the-top performances. He pulled out all the stops and created more than just a concert, he gave everyone a full-on production. With props that matched the songs and costumes as well it’s easy to see why his shows are so popular. While everyone knows that Alice puts on an incredible show, part of that is he surrounds himself with incredible musicians and lets them strut their stuff with extended solos. All three of his guitarists Nita Strauss, Ryan Roxie, and Tommy Henriksen wowed the crowd with their blazing six string skills. If that wasn’t enough drummer Glen Sobel and bassist Chuck Garric wowed the fans with incredible talents as well.

Alice saved arguably his most famous song to close out the night. “School’s Out” would be the perfect choice to end the night. But Alice being Alice wouldn’t simply be happy just playing the song, he had surprises to go along with it. First, he brought out Ace Frehley to help with the guitar duties which brought out plenty of cheers. After all you, got not one, but two icons sharing the stage. Then he had his crew toss out giant beach balls out into the audience to bounce around. It was as the song was getting near the end, that Alice finally broke character and introduced every member of his stellar band and closed things out with him saying that “Playing the part of Alice tonight is me” and with that, confetti canons went off.

Forever the showman and as equally important the musician Alice Cooper has consistently wowed the crowds with his marriage of imagery and music throughout his extensive career, and with this evenings performance he gave all that and more to everyone at the MIDFLORIDA Credit Union Amphitheatre. After witnessing a show like tonight’s, everyone in attendance had to be thinking of the immortal words of Wayne Campbell and Garth Algar ring true “We are not worthy!”