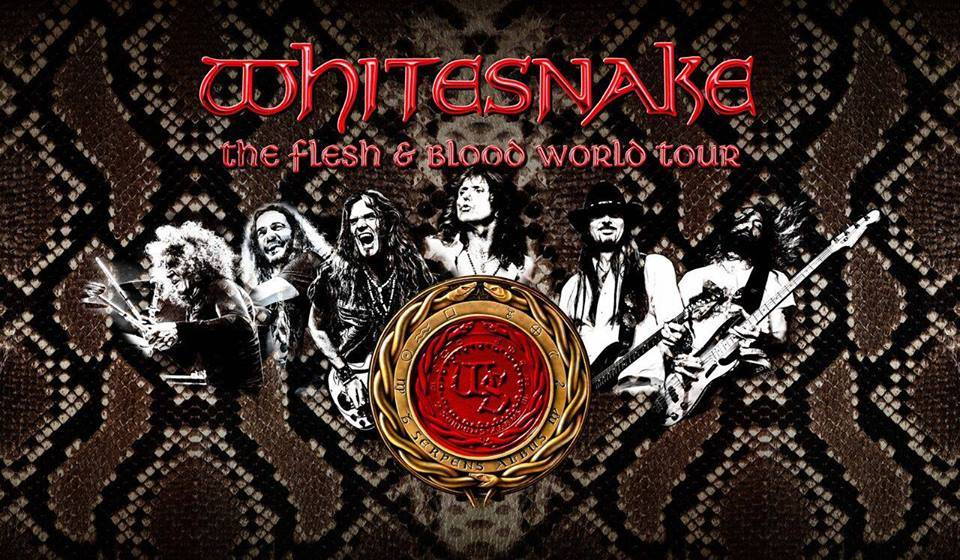 Cleveland, Ohio (May 15, 2019) – Winding down the U.S. portion of their Flesh and Blood World Tour the mighty Whitesnake made a stop in Cleveland, OH. With the third to the last show in the states, they were about to grace the stage here at the world famous Agora Theater.

The anticipation was on the rise as the line outside formed in the front of the venue. Patrons were chatting about prior Whitesnake shows as they stood, waiting. Topics varied from the last to the first time they saw them, or about how they brought their kids to their first concert tonight to see David Coverdale up close.

As the crowd shuffled into the venue, the GA floor area and reserved seats filled up swiftly. There’s not a bad seat in the house here in Agora Theater. Multi-tiered GA, coupled with VIP upgrades on the first floor, and followed by reserved seating in the balcony, really give the fan a choice of their desired perspective, and an awesome view from any spot.

Extended onto this night at the last minute, The Black Moods were happy to continue their trek with Whitesnake on this tour. We were excited too, wondering who tonight’s opener would be earlier in the week – only to receive the news the night before.

On the heels of their latest single release Bad News, these three have been enjoying themselves on this tour. It’s not hard to understand why, as the crowd’s response to their fresh rock ‘n roll is readily apparent. From the applause after each song to the lines at the merch table, you could witness the true connection they made with new fans tonight.

Check out the video for Bad News

Asking a fan who had his hands full of The Black Moods merchandise if he had heard the band prior to tonight, his response was “No, and usually, I don’t care for many opening bands, but I am glad I saw them. What a great band.” There were many fans here tonight with the same sentiment – and we agree with them.

You will be seeing more of Josh (Vocals/Guitar), Jordan (Bass), and Chico (Drums) soon. As they finished up their opening stint tonight, they have a series of club events coming up. Check out their upcoming events HERE.

David Coverdale cemented his legacy in rock ‘n roll history with 1987’s self-titled Whitesnake release. Selling over 8 million copies, spawning no. 1 and no. 2 hit singles, and climbing to no. 2 on the Billboard album charts in the U.S., 1987 was the year the country was snake-bitten.

As Whitesnake took to the stage the energy of the crowd arose. With the opening riffs to Bad Boys, it had started. David approached the front of the stage and let out the “Ow, oww, oww, owwww” – the crowd with hands in the air was ready to rock as David continued, “I know you, you know me, I’m the black sheep of the family“.

Keeping the energy going, they slipped into Slide It In for their second song. The rocking and dancing continued, just like it would throughout the night.

It helps when you have a consummate frontman like David Coverdale. As he led the other five through this celebration with solid vocals and backup vocals, it was great to see such showmanship from the members of Whitesnake tonight.

This style of rock is built on the foundation of booming drums and dueling guitars.

It was a great treat to witness a guitar battle between Reb Beach and Joel Hoekstra after the new song Trouble is Your Middle Name. As they held their positions on opposite sides of the stage, they traded licks and did their best to outdo each other for a very lengthy time.

This showmanship of pure skill was an incredible sight that brought the energy in the venue to another level.

Directly after the guitar dual, they played another cut from Flesh & Blood, Shut Up & Kiss Me.

This current single has all the Whitesnake swagger and feeling you would expect. It’s ironic some consider them an Eighties band only. Sure they were icons in the Eighties, but with this latest release, they are keeping their flag prominently planted in this genre with some of the best hard rock consumers can find.

Check out the video for Shut Up & Kiss Me

It was not long and it was time for Tommy Aldridge to show off his skills with a massive drum solo. The skills are apparent, but the entertainment value watching these pros take it to their respective instruments is a true joy to experience.

Slowing things down after the drum solo, most likely to give Tommy some time to rest after that impressive trip through drum wonderland, Whitesnake played Is This Love. They had saved the crowd favorites until the latter part of their set and this one started it off.

As some of the couples embraced, and the crowd sang along, it transported you back thirty-plus years with a magical moment that most were happy to absorb.

Continuing on with Give Me All Your Love they got the crowd moving again. There was no wavering as these six were carving through some of the biggest songs of the late Eighties.

Next up, Here I Go Again was a perfectly placed masterpiece in their set. Not only did it have so much connection back in ’87, but again today. It’s eerily prophetic in a way. Having the lyrics ring so true again like this in David’s career.

“No, I don’t know where I’m goin’
But I sure know where I’ve been
Hanging on the promises in songs of yesterday
And I’ve made up my mind
I ain’t wasting no more time“

It doesn’t get much better than that.

Of course, David Coverdale and company were out to try and top that moment. After exiting the stage and returning to roaring applause they had one more song in store for us.

Still of the Night was their choice for the encore. From the booming opening of this song to the very end, the crowd was on every note. Taking it out with a roaring ending that would resemble sonic fireworks, they finished up a spectacular night.

David Coverdale, Reb Beach, Michael Devin, Tommy Aldridge, Joel Hoekstra, and Michele Luppi approached the front of the stage and lined up for a bow to the crowd while receiving a round of cheers. As the members exited the stage some approached those in the front rows to toss them a memento like a pick, stick, or set list.