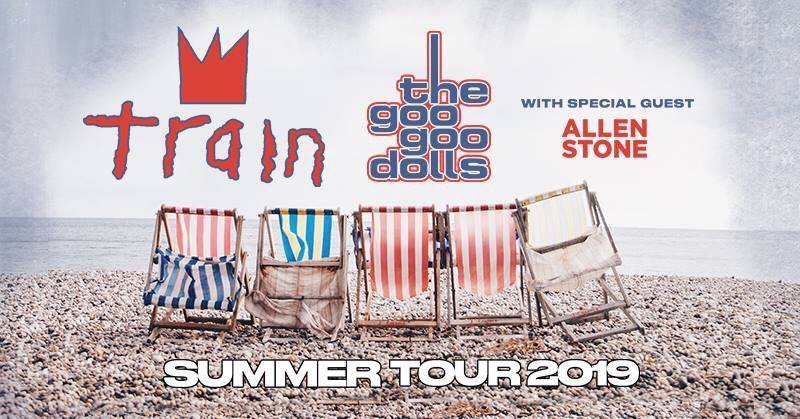 Clarkston, Michigan (July 23, 2019) – Sometimes its better to look back at memories that have made you smile than live in the current madness we call life. Tuesday at the DTE Energy Music Theatre, 2 of the biggest hit makers of their generation, Train and the Goo Goo Dolls rolled into town and rekindled some of those long forgotten memories.

After an exuberant set from special guest opener Allen Stone, it was the Goo Goo Dolls up first. For a little over sixty–minutes, original members Johnny Rzeznik and bassist Robby Takac checked off hit after hit. Fifteen to be exact, fourteen from the archives and one new track, the title namesake of their upcoming release Miracle Pill.

Rzeznek, looking and sounding as good as ever, brought to life some of the most recognizable hits of the 90’s. Trademark songs like “Slide,” ”Black Balloon” and “Name,” were reminiscent of a wandering trip down memory lane. The boisterous and carefree crowd, singing and at the top of their lungs were alive and living in the moment. Takac with his red-hot bass, was like a free spirit on stage, endlessly moving about and handling his guitar like a long lost friend. Ever the eclectic showman, the visuals had him bending backwards, forward and constantly jumping around, without ever missing a chord.

With set winding down much to the chagrin of the sold out crowd, the Goo Goo Dolls finished the night out with undoubtedly the 3 most prolific songs of their career; “Better Days,” ”Iris” and the storied “Broadway.”

With the crowd in full on party-mode after the infectious performance by the Goo Goo Dolls, Train had the dubious task to keep the momentum going. When Pat Monahan walked on stage to a cascade of streaming sparks and  opening the set with “Calling All Angels,” you knew right then this was a special night.

Trains set was filled with all the infectious sing-a-long songs you have ever wished for. “Hey Soul Sister” was just one that had the most timid fan belting out the lyrics. Even covers of “American Girl,” a tribute to Tom Petty along with the Queen classic “Under Pressure” featured twelve thousand boisterous back-up singers all playing air guitars while belting out the lyrics as loud as humanly possible. In fact, the night was a lesson in what a concert should be; a live performance of a greatest hits album, which coincidently happens to be Trains most recent release!

Everyone, including a ever smiling Monahan, appeared to be having a great time. So much so the “Marry Me” singer asked for a cell phone from off stage to record a video while simultaneously announcing to the crowd, “Chicago ain’t got nothing on you Michigan,”  which evoked deafening roars from the sold out venue!

By the time the encore rolled around, Train was ready to rock hard and let fly with an unbelievable authentic rendition of the Led Zeppelin classic “Heartbreaker.” If that wasn’t enough to kick the vocally spent fans into hyper drive, a full on version of the mega hit “Drops of Jupiter” was, and proved to be a perfect selection to end a memorable night with.

Often times these co-headlining tours find the fans bugging out after their favorites play. Goo Goo Dolls and Train are a great combination, one where you could tell people enjoyed both bands. If you want a fun night with friends and great recognizable music, get yourself along to this one. You will have a great time,guaranteed!