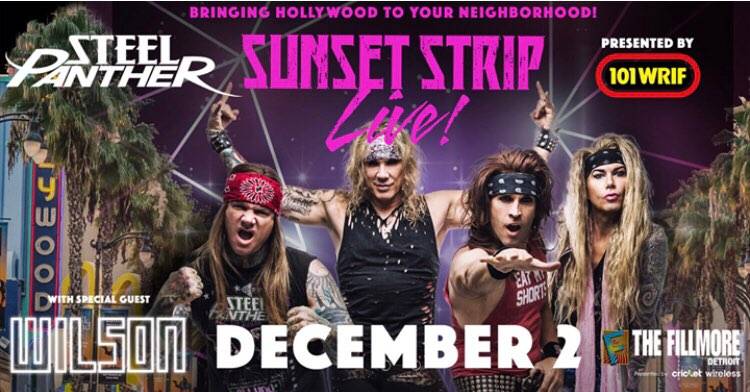 Detroit, Michigan (December 2, 2019) – Tonight in the Motor City during the Holiday season is a festive occasion. People are out in masses, celebrating with family and friends or catching a show at one of the many venues throughout revitalized theater district. The Fillmore Detroit is one of those classic Renaissance Revival venues from the mid 1920’s and tonight it played host to Steel Panther and their Heavy Metal Rules Tour.

Donning their usual spandex outfits, Steel Panther does nothing to dispel the fact that they are portraying themselves as a throwback band from that lost era of hair bands. This comedic, yet very talented Glam band has been rocking together since 2000 and never fails to entertain their fans with their raunchy comedy and eclectic stage presence! Their continuous banter with the ladies in the audience along with each other are always good for a laugh and really keep the crowd engaged.

Did I forget to mention these guys are also fabulous musicians? Michael Starrs vocals are strong as ever, reminiscent of some of the best singers from the Glam rock era. His range is undeniable and he continues to hit the high notes with ease and precision. Add in his infectious smile, you have and front man that can perform with the best in the business.

Stage partner and lead guitarist, Satchel, is an absolute animal on his axe, too! A vastly under-rated guitarist, due to the fact very few in the music industry take Steel Panther serious, Satchel is definitely the field-general on stage. Mixed with a stream of one-liners between dizzying guitar licks and mind-numbing solos, the man makes his craft look easy. It was never more evident than during his now- famous guitar solo in the middle of the show. While impressive anytime during the show, the crowd loses it when Satchel begins playing the drums as he shreds on his guitar! If performances like this weren’t enough to dispel the critics about his crazy skills, I would honestly check their credentials!!

Tonight’s set list was a blended mix of Steel Panther’s own catalog and some new stuff off their latest release Heavy Metal Rules. After opening the night with “Eyes of a Panther”, they slid effortlessly into “Let Me Cum In”, followed by a new and over the top single off the new LP, “All I Wanna Do is F*ck (Myself Tonight)”. You would be hard-pressed to see a show that has world-class musicians along with the hi-jinks and hilarity that transpires at a Steel Panther show. Whether you’re singing along to, “Weenie Ride” or enjoying Lexxi’s leaf blower hair solo, it’s all part of what makes these shows so unique and amazingly fun!

The never ending debauchery continued when the band pulled as many willing females on stage for,“Party All Day”and “17 Girls In A Row”. In typical Steel Panther fashion, the raucous females began dancing like they were at one of the famous gentleman’s clubs on Sunset Strip; and you guessed right, the tops began coming off!!! The fact that this show was for ages 17 and over was well thought-out and for good reason! For those who have seen Steel Panther on previous tours, you’d be forgiven for thinking the show would be adapted due to the presence of a pre-adolescent audience. For all their fans pleasure, this show was 110%, unadulterated and as filthy as you would expect from Steel Panther!!

As the night drew to a close, it was time for some vintage Steel Panther. After a ripping version of “Death to All but Metal” the band returned to the stage to destroy what ever was left with a scorching version of their one of their all time fan favorites,”Glory Hole”.

Sure these guys are sometimes a satire of other rock and roll bands, but at the end they are damn good musicians! Steel Panther has a good time on stage and they make sure their fans do, too. Jokes and comedy aside, these guys rock and they know how to do it well, and consistently.

For a good time call……your closet venue and buy a ticket for a Steel Panther show. It’s the best time money can buy!