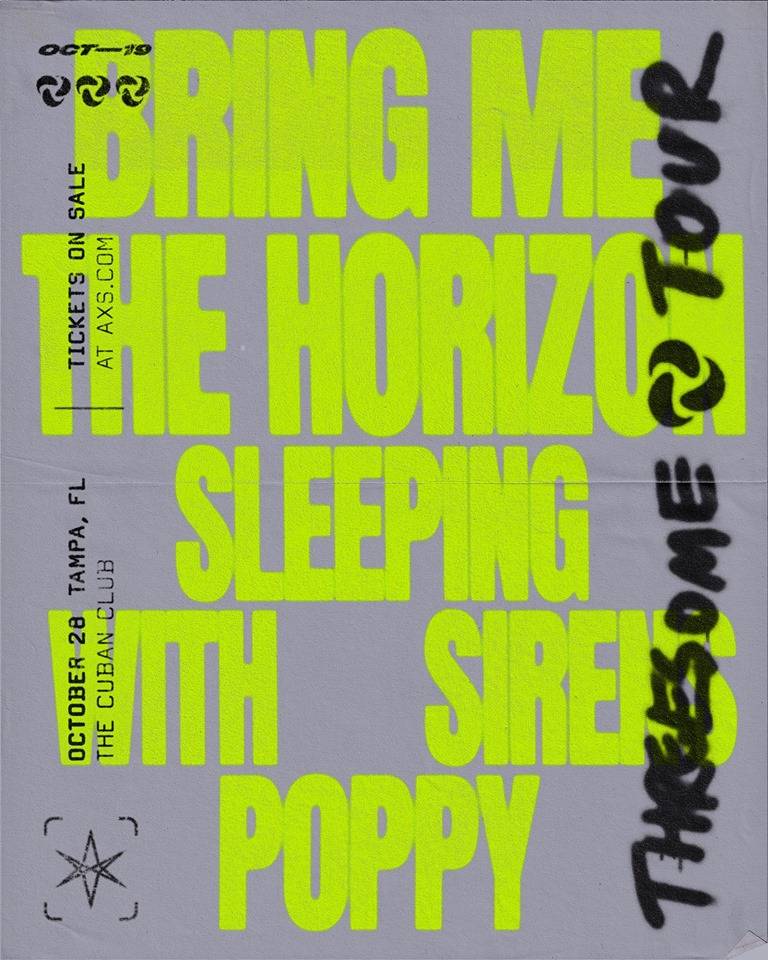 Under an uncertain sky, the courtyard at The Cuban Club is rapidly filling up. Florida’s notorious heat and humidity, nor the very real threat of rain aren’t slowing down the pace to get in and get a prime spot near the stage. You know it has to be a pretty good show to draw this big a crowd in the middle of the week. Tonight, Sleeping With Sirens and Bring Me The Horizon will bring out their sizable and rabid fanbase out to see these two high energy acts do their thing.
Coolly walking out on stage and waving at their wildly cheering fans, Kellen Quinn and his band mates in Sleeping With Sirens were all smiles at the love they were getting, and they were about to give back. With the release of their latest album How It Feels To Be Lost, it was fitting that they kick the night off with “Leave It All Behind”, the first track off of the album. The second they started in on the song, it was like a light switch getting flipped. The energy level they brought to the stage was awe inspiring. Guitarists Jack Fowler and Nick Martin were in constant motion trading places on risers positioned on either side of the stage. Half-way through the second song “Never Enough”, which is also off their latest release, the skies finally decided enough was enough and the rain started to fall. But the fans packed into The Cuban Club courtyard weren’t deterred by the change in the weather. They were just thrilled with the killer performance Sleeping With Sirens was putting on. One impressive sight from the show was bassist Justin Hills doing a full split without missing a beat. Of their ten song setlist, eight of the tunes on it are from How It Feels To Be Lost. So, the fans received more than a just a mere morsel from the album, if anything it had the feeling that this was an album release party. Throughout the show, Nick Martin was having fun teasing fans by playfully pretending to toss his guitar picks at them. It’s very obvious that these guys truly enjoy every second that they have on stage and appreciate their adoring fans. With their new single “Agree To Disagree” receiving tons of airplay, of course they played it live. They closed out their part of the show with a raucous version of “If You Can’t Hang”

After a bit of a changeover, it was now time for Bring Me The Horizon to rock the crowd. When the lights came up, the stage was vastly different from the stripped down stage. With a catwalk in the back of the stage with stairs leading down to center stage and tons of video screens stacked in back with images of speakers on them, One look at the stage setup and you knew this concert was going to be a visual feast. First to make the stage were two masked people that took both sides of the stage while holding C02 guns. Just like their tour-mates Sleeping With Sirens, Bring Me The Horizon also released a new album earlier this year, Amo. Led by lead singer Oliver Sykes dressed in a suit worn inside out, the band in white jumpsuits came down the stairs and immediately launched into “Mantra”, the first single off of their new album. Almost immediately after they started the crew that were holding the C02 cannons started shooting them off towards the crowd. Between the lighting, the C02, and the rain it made for a very cool and dramatic start to the show. Half-way through their performance of “Avalanche” the crowd surfing began and remained constant throughout the show. During “House Of Wolves” the back-up dancers came out and performed around Sykes while he sang. At one point he walked up to the catwalk to watch them do their thing, while looking like a general observing his troops. With their new album out for a while now, they also had to play the other two singles from it “Wonderful Life” and “Sugar Honey Ice & Tea”, which sounded amazing. As they were getting ready to play “Antivist”, Sykes saw a sign from two fans asking to sing and he took the lucky fans up on it. Bringing them to the stage he handed them the mic while quipping he wouldn’t mind taking a break. To everyone’s surprise the two fans pulled it off and did a fine job. The on and off rain would do nothing to stop the excitement felt throughout the crowd right to end of the show.

On a night that turned rainy, mother nature tried her best to put a damper on the show but failed miserably. When it comes to bringing exciting electric performances to their fans, Sleeping With Sirens and Bring Me The Horizon are masters at doing just that, regardless of the weather. With both bands having new releases out and plenty of new songs in their arsenals, fans had plenty of new songs to sing along to. While this successful tour is over, keep an eye out for both bands to come back around and make sure you catch them next time around.