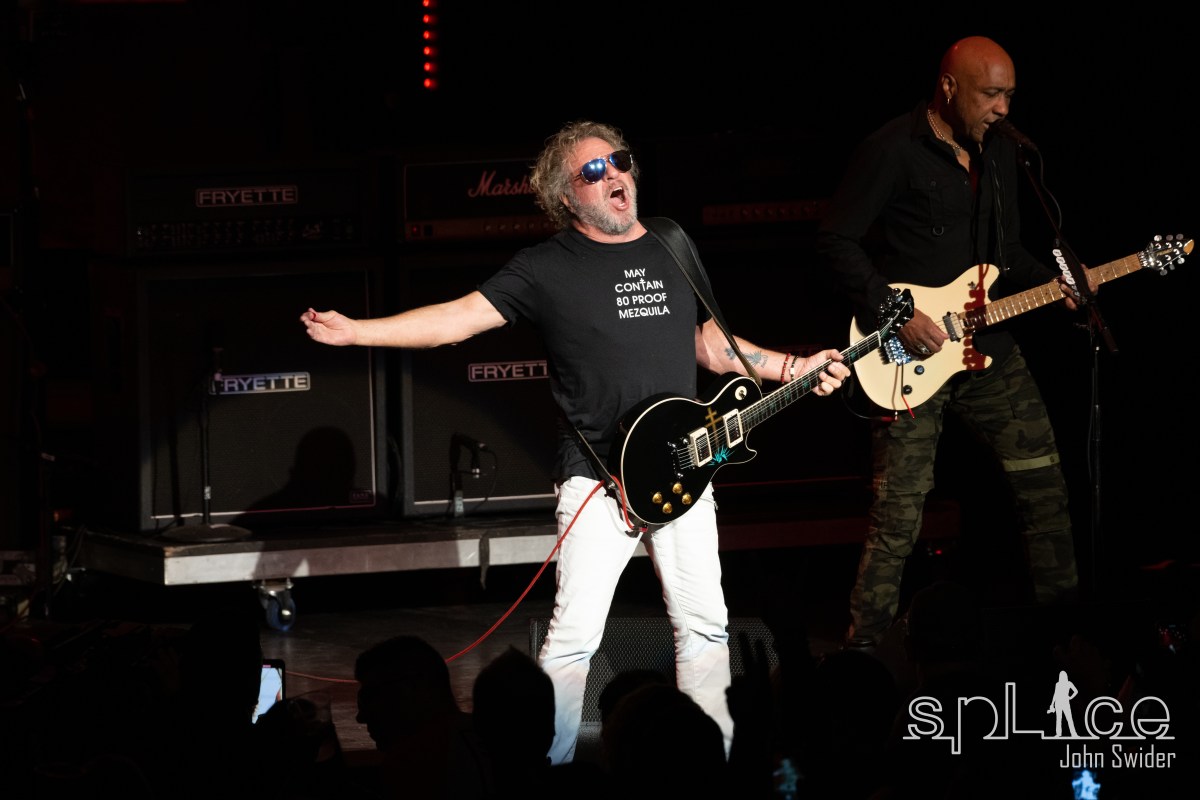 Clarkston,Michigan (August 24,2022)-It’s not all about the party when Sammy Hagar, aka..The Red Rocker and his all-star band The Circle are on stage performing on their current leg of the Crazy Times Tour. There were 50 years worth of bona fide rock classics in the setlist Tuesday at Pine Knob Amphitheatre from a wry mix of bands, but this still potent rock outfit certainly knows how to have a good time doing what they do best. But to be fair, Hagar did start the show by bellowing to the sold out venue, “We are here! What are we here for? We came to f’ng party!”

Still full of energy and good natured humor at a youthful 74, Hagar was as always the ringmaster, prancing around the stage throughout the 95-minute show while tossing back a few cans of beer along with a selection of beverages from his new Beach Bar Cocktail line. Ever the host and impromptu barkeep, the tequila hustler poured shots of Mezquila for fans along the front row throughout the evening. He even carried a Sharpie type pen with him to sign autographs, including on several Detroit Tigers and Red Wings jerseys that sported “Hagar 55” on the back in homage to his signature sing along hit, “I Can’t Drive 55.”

But the best “party favors” Hagar and the Circle bandied about Tuesday night were the songs,17 of them to be exact. One in particular, reached all the way back to 1972, (yes,that is 50 years ago) the Montrose banger “Rock Candy” that had Hagar sounding almost as good as when the song was originally cut. Not to be overshadowed, six covers from Hagar’s glory days as the frontman for Van Halen were mixed in the eclectic setlist with one being highlighted by bassist Michael Anthony taking lead vocals on the pre-Hagar favorite, “Ain’t Talkin’ ’bout Love,” from Van Halen’s self titled 1978 debut LP. which coincidently Anthony was a part of.

Hagar’s solo projects made a generous offering also, from the opening “Crazy Times,” the title track for the upcoming Sammy Hagar & The Circle album, due to be released September 30th, all the way through the rhythmic grooves of “Three Lock Box.” The signature anthems such as “Mas Tequila” and “Heavy Metal,” both received abundant accolades from the age diverse crowd, but of course, “I Cant’t Drive 55,” was the hit of the evening.

The Circle’s potency as a band was on display throughout the night as well, especially as it battled through a challenging sound mix that was so loud and off kilter at times that it felt as if it was on the verge of a major derailment. Anthony, serving as assistant party master/ co-host, shared vocals with Hagar on several late show songs, while guitarist Vic Johnson showcased his own flavors even on the Van Halen songs. Johnson, the vastly under appreciated lead guitarist of The Circle, cleverly inserted hints of the aforementioned Van Halen’s, “Panama,” into Hagar’s “Your Love is Driving Me Crazy,” plus a little of Billy Gibbons influence from  ZZ Top’s “Legs” that melded into “I Can’t Drive 55,” which was just enough to change them both up just a bit.

Well travelled elite drummer Jason Bonham, son of Led Zeppelin’s late John Bonham, was his usual force behind the set and anybody who didn’t get goosebumps hearing him kick the Circle into Led Zepplin’s “Rock and Roll,” probably shouldn’t have been at the show in the first place.

Hagar boxed himself into a few corners during the show, one time talking about electric guitars and another about doing something untold with a goat he saw at one of the parking lot tailgate parties.Nothing to enhance the experience, it did evoke a good round of laughter and showed a lighter, softer side to The Red Rocker that the fans were unaccustomed with. Subversively, his emotion and love for his fans was genuine as he thanked the Pine Knob crowd before the encore pairing of “Eagles Fly” and Van Halen’s “Cabo Wabo.” “When you play a show like this, I just go, ‘How can I ever quit this? It’s impossible. I’m addicted!”

He can rest assured that nobody at the show wanted him to find a cure for this most appeasing, yet non-toxic addiction any time soon.

Tuesday’s show was also the kick-off of Hagar’s late-summer run with George Thorogood & the Destroyers, whose hour-long set was a perfect party appetizer. Like Hagar, Thorogood has his own act down pat. A heavy blues infused rock show that also serves up plenty of wry humor and enough ferocious guitar licks thrown in that would make most well travelled rock bands envious. The short and heavy setlist had just enough for the Destroyers to cover all the essential fan favorites, pairing “I Drink Alone” and “One Bourbon,One Scotch,One Beer” with John Lee Hooker’s “House Rent Blues.” Under normal pretenses that would be a fantastic run of hits but this time it served as the perfect segue into a cover of  Bo Diddley’s “Who Do You Love” followed by Thorogood’s signature hit “Bad to the Bone.”

Thorogood also injected a bit of Detroits adopted artist, the J. Geils Band’s “Detroit Breakdown” into another cover, the Strangeloves’ “Night Time.” Thorogood wrapped up his limited stage time with a high-octane infused take on Hank Williams’ “Move it On Over,” but not before recognizing Pine Knob’s 50th anniversary. “Nobody had to remind me what venue we were playing tonight,” Thorogood said. “It’s been known by many names, but it will only be Pine Knob to me. There can only be one Pine Knob!”

George Thorogood and The Destroyers: