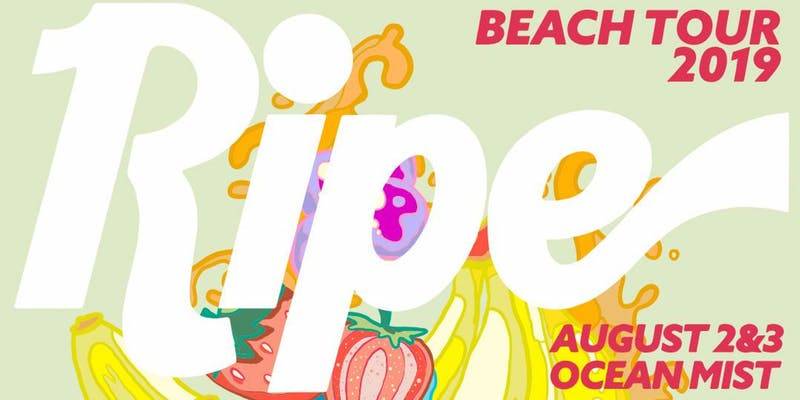 South Kingstown, Rhode Island (August 3, 2019) – Located directly on the town beach of Matunuk,the Ocean Mist club played host to Ripe with special guest Harsh Armadillo. The small beach bar/venue would surprise us with its unexpected great sound and quality light show. The place started to fill towards capacity early as excited fans rushed in trying to jockey for the spots near the stage. In fact, I’m not sure when we have ever seen a place this crowded before the opening band even walks out on stage.
Harsh Armadillo, a cohesive 7-piece band, set the tone for the night with a funk rock repertoire full of groovy solos and a light show that proved to be surprisingly better than you would normally expect in a venue of this size. With a group of energized fans rocking and dancing, the scene was more reminiscent of an underground club than a large beach shack.  Despite temperatures rising towards the dark side of sweltering, Harsh Armadillo was engaging and enthusiastic, even stopping and posing for a group photo at the end of their set.
Before Ripe took the stage for their headlining set, Splice took some time to speak with a few concert goers. It quickly became evident that the majority of the attendees had attended a Ripe concert multiple times and were ready to share a little insight on the experience. The fans we spoke with were eager to tell us “this is going to be the best show you have ever been to”, upon learning that it was our first. We left the talkative group wondering if the Ripe fans were possibly just exaggerating, but that lingering question and surprising answer would soon be put to rest.

As the lights changed from a vibrant glow to moody hues of purples and blues, Ripe emerged onto the stage. Starting off with the traditional opening track “Passerby,” the enthusiastic crowd erupted into singing back at the band, word for word, while dancing along to the throbbing beat. During all the craziness that was transpiring during the opening song, lead singer Robbie Wulfsohn found the time to reach out and grab an enthusiastic fans cell phone to take a selfie.
Doling out high-fives along with shaking and holding hands with the tightly packed-in crowd tonight, it’s clear that Ripe loves their fans. In turn the fans are supportive, as well as dedicated to having a good time. This raw energy would carry through the night, often reaching new levels as the light show changed and again with the addition of a mirror ball. Late in the set, Ripe played a trio of their more notable hits, “Little Lighter,” “Goon Squad” and “Downward,”  which based on fan reaction alone, ratcheted the intensity levels a few notches higher!
Ripe kept the banter to a minimum as they spent almost the entire set rocking the stage and getting hyped along with the audience. As the energy packed show started to wind down, the band made sure to give one more sincere thank you before exiting the stage. Soon after, the stage lights dimmed and the entire floor of the establishment began shaking as fans started stomping, jumping and chanting for “one more song”. Not to disappoint, Ripe came back out on stage for a multiple song encore of “Young Tom Rose” and the vibrant “Flipside” that would finally satisfy the crowd. Throughout the entire night, this extraordinary band didn’t miss a beat and paced themselves perfectly through their set, resulting in one of the most energetic and fun concerts we have seen in a long time.