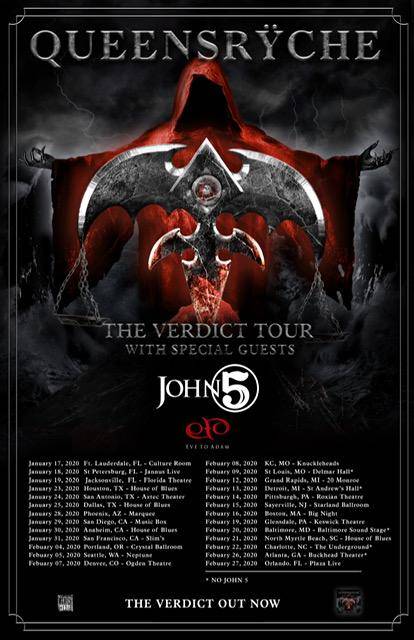 Detroit, Michigan (February 13, 2020) – More often than not, when a band is still performing in their fourth decade of existence, they are a mere shell of their former selves. Be it natural attrition, musical indifferences, or the erosion of musical skills – time take its toll. Progressive metal pioneers, Queensryche, deep in the midst of a modest career renaissance, brought their The Verdict Tour to Saint Andrew’s Hall in Detroit, Michigan, tonight in support their March 2019 release of  The Verdict. The aforementioned album is the bands third LP with vocalist Todd LaTorre and has been the most successful Queensryche album in recent history. Backed with original members Michael Wilton (guitar) and Eddie Jackson (bass), The Verdict takes a harder approach sonically than other recent releases and harkens back to the ‘experimental’ phase of the bands history, a little more metal than progressive.

“Obviously you will always have some people wanting to hear a certain song that you did not play,” says singer Todd La Torre, who took over from original singer Geoff Tate in 2012. “That being said, we are constantly hearing from people to play more of the new material. Some don’t know the new stuff, but many do”.

In many ways, the show that Queensryche has crafted is a direct metaphor of Latorres words. Queensryche hits are meticulously crafted works of musical art that have burrowed their way into the public’s consciousness after decades of continuous airplay on classic rock radio. Playing wild variations of them onstage or breaking out obscure B sides, covers or forgotten solo tunes would practically be a criminal offense to their fan base, and that is where cuts off The Verdict filled those transitions perfectly.

Thursday nights show consisted of a mixture of the original classics graciously mixed with new songs from their latest album, The Verdict. Queensrÿche has amassed a setlist that draws on the emotions of their fans by relying on older radio favorites along with newer material that focuses predominately on their most recent release. Sure, all the major hits were included as should be expected; “Jet City Woman”, “Empire”, ”Operation:Mindcrime” and “Silent Lucidity”. But in stark contrast, “Bent”, “Dark Reverie”, “Light-Years” and “Man the Machine” all from The Verdict, sounded new and exciting and melded in to the evenings performance seamlessly.

As the set wound down, lesser hits like ”Screaming in Digital” and “Queen of the Reich”, worked their way into the show. They fit into the repertoire as they have many times before, but now Queensryche has optimized both definitive renditions that feature LaTorre displaying more intensity and stage presence than anytime during prior tours. The arrangement plainly works better and definitively proves that this formidable frontman has finally accepted his place behind the microphone as the leader of this pioneering outfit.

After a short interlude off stage for a short breather, the band returned to a well-deserved thunderous ovation from the near capacity crowd. Without adieu, the band broke into a full-on jam of “Light-Years” from The Verdict. If the earlier cuts off the LP did not make you a believer of Queensryches resurgence, this one certainly did. Granted it is a little harder than what traditional fans have come to expect, but overall it fits in quite respectably for the first cut of a three song, high intensity encore. The band put an exclamation on the evenings set with two songs from what could be regarded as the ultimate fan favorites, “Empire”, off the album of the same name and “Eyes of a Stranger”, from the landmark release Operation:Mindcrime.

Who could argue with such a strong setlist of 18 songs spanning Queensryche’s quality musical library. For being a band that has four decades of experience, the classic songs never seem to age while the new stuff at first listen appears to be just as good if not better than anything from the earlier iteration of the band. The current band lineup, now with a few years under their belts as a unit, is sounding as sharp and fresh as they were back in the heyday. La Torre has brought his energy and enthusiasm that has rejuvenated the band since replacing Geoff Tate in 2012. Chris Grillo, former drummer for the band Kamelot, is doing a stellar job filling in for Scott Rockenfields, which is a huge task in itself, but he manages it with ease and precision. Queensryche past has enabled themselves to still be considered as one of the premiere progressive/metal rock bands in the business. With the new music still on the charts in parts the world, new fans are being introduced to Queensryche everyday and their fan base continues to grow. Can a co-headlining tour be far behind? We cant answer that but one thing for sure, The Verdict is in and this show is a winner!