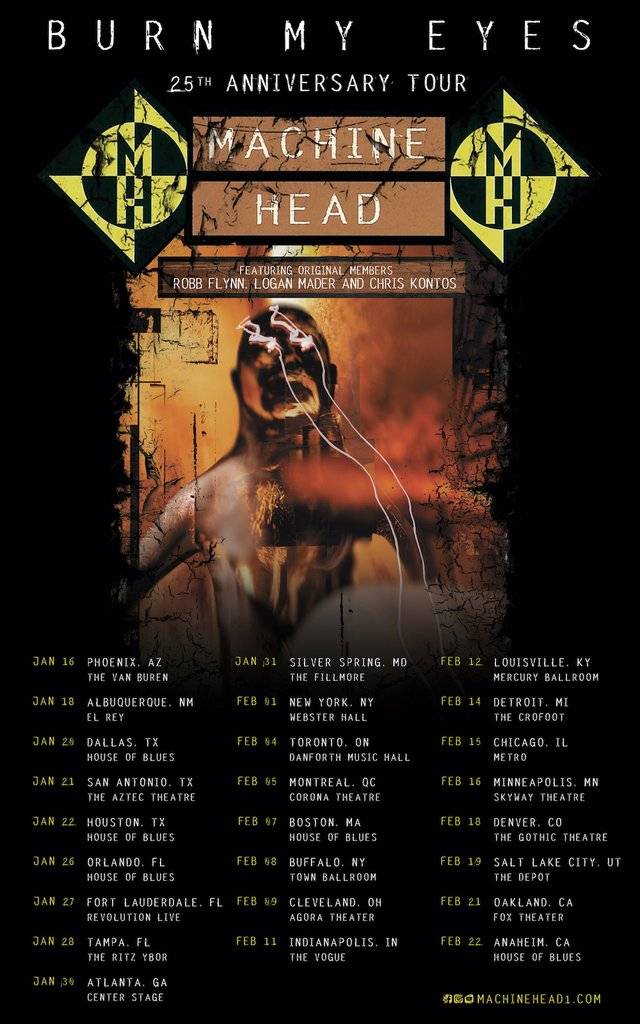 Orlando, Florida (January 26, 2020) – It’s been over a decade since thrash metal titans Machine Head has graced the stage of Orlando Florida’s House Of Blues. Not that this was any of their doing. But, the higher ups at Disney, where the House Of Blues is located decided to ban them because of their incendiary lyrics and their ‘undesirable fans’. Thankfully, things do change and, in this case, just in time for the 25th anniversary tour of Machine Heads lead off album, Burn My Eyes. Yes, the ban was magically lifted, and the show was on!

Since their inception in 1991 Machine Head, and its lead singer and driving force, Robb Flynn, have been deftly combining thrash metal and punk. Flying in the face of the grunge movement in 1994, Flynn and company put together their first album, Burn My Eyes. This quickly became their record labels best selling debut album. 25 it’s now the perfect reason to get out on tour and celebrate with their fans.

If there is one thing that Machine Head knows how to do is put on an absolute beast of a live show. So much so, that they didn’t need an opening act for this tour. Yes, they’re going it alone. But when you are celebrating the 25th Anniversary of your debut album, you want it to be something special. What they cooked up for their fans would be this tour would be two shows in one. Yes, they would perform two full sets; the first showcasing music from throughout their long career, and the second playing Burn My Eyes in order in its entirety.

As the crowd packed into the House Of Blues, the coveted spots at the rail were filled with their die-hard fans chanting “Machine f*cking Head” right up until the band hit the stage! When they kicked into “Imperium”, right on cue the head banging started. The duel guitar work of Robb Flynn and Waclaw Kiełtyka was at its absolutely brutal finest. Without even taking a breath they quickly dived into “Take My Scars” next. With Robb Flynn periodically exhorting the audience to get a circle pit going, everyone on the floor was more than willing to oblige him. With this being a Sunday night show, when Robb Flynn asked everyone to hold up their beers, he laughingly said to everyone “ You guys are going to work hungover tomorrow”. Of course, that got a big laugh along with a sly acknowledgement that he may be right.

As most concerts these days focus on the band as a whole, the solo has seemingly become a lost art, but not tonight. With Machine Head welcoming Waclaw Kiełtyka into the fold as their new guitarist, they decided to let him have some time alone on the stage to show everyone just how good he really is. Boy did he ever show the crowd just how killer a guitarist he is. His shredding melted the face off of this crowd filled with die-hard Machine Head fans.

After the solo was over Robb Flynn walked back on stage with an acoustic guitar and started talking to everyone. He related the story of how his band was banned from all Disney properties because of the anti-war contents of their songs, and of course their ‘undesirable fans’. But somehow the powers that be decided to lift the ban so they could make their triumphant return after 13 years. He also went on to say, “you don’t stay in the music industry for 25 because you love the music industry, you do it because you love music”. Which was the perfect cue to launch into “The Darkness Within”. Towards the end of the song the audience took over the “Ooooh-ohhh” part and carried it on for several minutes to the absolute delight of Flynn.

While Machine Head has an incredible catalog of songs, they are also willing to pay tribute to bands that mean something to them. Tonight, they dug back into their 2007 album, The Blackening, to play their version of the Iron Maiden hit song “Hallowed Be Thy Name”. The last song of the first set was “Halo”, which they ended with a hail of confetti and CO2 cannons going off!

After a brief ten minute intermission, it was now time for the second stanza of the night. As the band came back on stage to perform Burn My Eyes, everyone noticed instantly that some of the band members had changed. Yes, They brought back drummer Chris Kontos and guitarist Logan Mader the original musicians that recorded Burn My Eyes to play for everyone. As with the album, they kicked it off with “Davidian”. With all the original musicians with the exception of bassist Jared MacEachern playing, it was an amazing site to see. Of course, when they got to the lyric “Let freedom ring with a shotgun blast” everyone screamed it at the tops of their lungs!

The rest of the set went off directly like the album song for song except for a few surprises. Midway through, Chris Kontos had his time to shine as he pounded out a brilliant drum solo which included some of the song “The Rhythm Method”, from the band Rush, as a tribute to the recently fallen Neil Peart. As they were getting to the final song of the album, and of course the night, Machine Head threw out another surprise to everyone. Instead of “Block” as expected, within the first few notes a shocked audience realized that they were playing the Metallica song, “Sanitarium”, which they continued into Alice In Chains “Angry Chair”, then “Seek And Destroy” by Metallica, and finally Slayer’s “South Of Heaven”. What an incredible medley they sprung on the audience. The show concluded with “Block”, the last song of Burn My Eyes.

With just over three hours of music played to perfection by Machine Head, a weary, yet satisfied mass of their fans filed out of the House Of Blues. Sweating and breathless at the mammoth 25-song setlist, the audience got far more than they ever expected from this nights show! Hopefully it won’t be another 13 years before Machine Head graces the House Of Blues stage with another brilliant performance like tonight’s was!!