There is a noticeable wide age range at this show. From older early Kiss fans, to party like the old days, to the kids of their kids clearly still in elementary school. With that in mind, there is also a very enthusiastic display of these fans up dressed up in Kiss style makeup and full glammed-out space rock outfits – wigs, boots, capes, the whole deal. So fun!!

There are multiple long lines to get into the arena on this super windy Virginia mountains evening. Fans are swiftly entering the venue and quickly grabbing some elaborate Kiss merch before they take to their seats.

80’s rock icon David Lee Roth starts the night off. His band walks out on stage first as the crowd cheers. Then the short white haired buzz cut wearing Roth walks on stage darned in a sparkling silver jacket seemingly leather red, black diamond patterned pants, and all smiles. He sounds great and even pops off some signature high kicks throughout the set. The performance consists of mostly classic hits from his former band Van Halen such as “Beautiful Girls“, “Runnin’ With the Devil“, “Just a Gigolo“ and concluding with fan favorite “Jump“. The crowd is pleased and singing along to these memorable songs.

Yeah, yeah, ah, yeah
I live my life like there’s no tomorrow
And all I’ve got, I had to steal
Least I don’t need to beg or borrow
Yes I’m livin’ at a pace that kills

There is a brief pause after the David Lee Roth performance as the stage is reset for tonight’s legendary Kiss appearance. The entire stage is covered by a giant black curtain that has the iconic Kiss logo printed in metallic paint on it making the eager crowd wonder what is about to happen.

Sure enough, the lights drop and some intro music plays across the arenas PA system. The crowd explodes as the enormous curtain drops and the stage hands quickly pull it off stage left as if it was never there. The bands smoke machines and pyro spark pop and illuminate the stage as I notice drummer, Eric Singer, already sitting on the drum riser showered in red light as a large Kiss logo displays on the LED screen behind him. There are several eight-sided polygon shaped discs lined with ornamental black spikes and color changing led tube lights descending down from the ceiling above the stage. Sure enough on the front three panels I see Paul Stanley, guitarist Tommy Thayer, and the infamous daemon bassist, Gene Simmons, as they are lowered to the stage and step out as the crowd roars.

With the venue spotlights panning the band and audience, the band lands on stage like a bomb as they play their classic mega hit “Detroit Rock City” and the energy of the John Paul Jones Arena is raised to 100!

The rock icons do not disappoint. Their showmanship is unmatched as they take us through some select bangers of their musical catalog. The entire place is rocking to familiar favorites like “Shout It Out Loud“, Heaven’s On Fire, “Lick It Up“, and “Tears are Falling“.

The show is filled with spectacular moments –  Paul playing his guitar between his legs, Gene spitting blood surrounded by exploding and spinning fire plumes, and each member floating above the stage. As the songs change the polygon shapes that originally lowered the band to the stage are now floating and moving around above and displaying different graphics that accompany each song. For instance during the song, “Psycho Circus“, there was circus style imagery on each one, as well at the larger screens on the back, and each side of the arena. At one point each display was showing Gene‘s daemon painted face as he sing various songs.

The intro to “God of Thunder” begins and Gene yells,

“Charlottesville! Let me hear you!”

Eric performs a drum solo as the video screens display different angles of him playing. Gene also did a bass solo hovering above stage at which green and red lights enhanced the mood as his spit blood for the crowd.

Paul says, “You having a good time??” and the crowd responds “Yeah! …Us too, that’s awesome. … Charlottesville, we don’t have to go to some big ass city to see some people who know how to rock and roll, you are here tonight! … If y’all can turn this place into the Charlottesville zoo, we can turn this into a Psycho Circus!”

and the song starts.

Before the encore, the band came to the front of the stage and were throwing out guitar picks and drum sticks as if they were done. They did a group bow, but everyone knew it wasn’t over.

The final song of the night is the bands epic theme “Rock and Roll All Nite” From beginning to end there are pyro blasts and confetti cannons engulfing the entire arena. Large inflated white balls are also being dropped from the ceiling and bounced around the crowd, but eventually being snatched up by fans wanting there special Kiss memorabilia.

As the venue empties, the screen back drop shows “Kiss loves you Charlottesville” while everyone begins to file out. Kiss delivers an unbelievable experience that will continue to spread the bands legend throughout time as one of the most iconic and entertaining must see bands in history.

Setlist:
Detroit Rock City
Shout It Out Loud
Deuce
Say Yeah
I Love It Loud
Heaven’s on Fire
Tears Are Falling
War Machine (Gene breathes fire at the end)
Lick It Up (with “Won’t Get Fooled Again”… more )
Calling Dr. Love
100,000 Years (with drum solo)
Cold Gin (with Tommy Thayer guitar solo)
Bass Solo (Gene spits blood)
God of Thunder
Psycho Circus
Parasite
Love Gun (Paul on stage in the audience)
I Was Made for Lovin’ You (Paul on stage in the audience)
Black Diamond

This is the ‘End of the Road‘ – catch them on TOUR while you can! 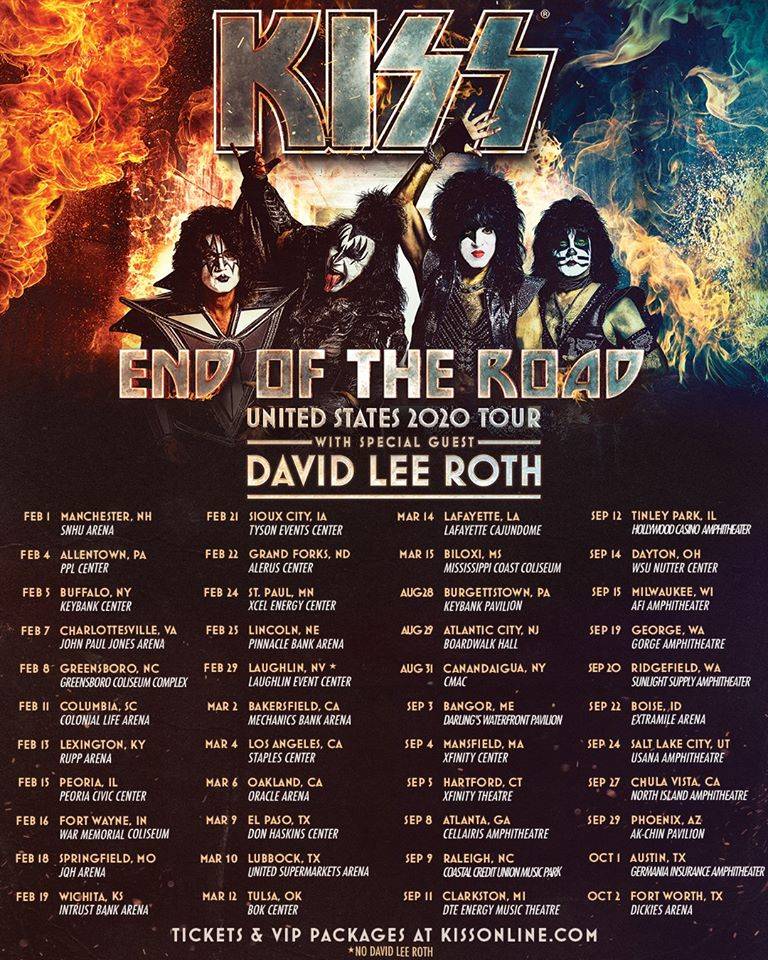