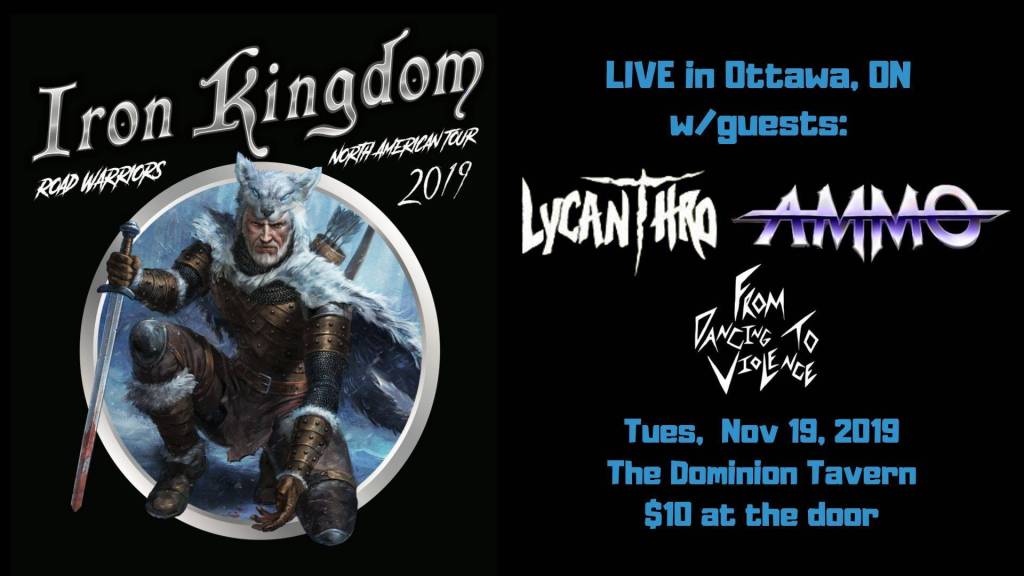 Ottawa, Ontario – (November 19, 2019) – Iron Kingdom made the Dominion Tavern their own domain when they stopped in Ottawa tonight. Featuring an epic set list with some great bands to help them slay the evening, anyone in Dominion Tavern was set to have a good time.

Despite a delay in starting the show, when Ivory Knight did begin their set they came out swinging. Featuring crescendo-ing vocals to fill the venue, the band was a nostalgic and fun throwback to the classic titans of metal (seriously, they released their first demo in 1988). During their song “Fight,” (off of 2018’s album Unity), the band had fans join them in vocals during the chant portion of the song and helped to create an atmosphere of camaraderie and engagement. With edgy riffs and great bass solo’s the band was edgy and fun way to kick off the evening.

Following Ivory Knight were the witty and captivating prog metal band From Dancing to Violence. They deftly blended elements of elegance with viciousness in their instrumentals and lyricism. Like their name, the band played a set of songs that guided the crowd through the perils of bliss and antagonism. With Mariah Fridgen taking crowd engagement to a level beyond the stage, as she came down off it to sing directly to tables close to the stage and even moshing with some of the fans during a song. From Dancing to Violence are band to check out!

With personalities and on-stage presence as wild as their hair, Ammo was eager to get folks in Dominion Tavern out of their seats and onto the floor. From synchronized guitar whipping to truly engaging with one another, Ammo were a force to be reckoned with on stage. Despite some technical difficulties, the band was still able to make a positive impression with jokes to kill the time, a sign of a band that were able to showcase talent beyond music. A whirlwind of songs like “Hammer“, and their self-proclaimed one hit wonder “Too Metal for Metal” the band brought the heat to the Dominion Tavern on a cold night. Be sure to check them out if they tour near you.

Following Ammo were the local shredding gods Lycanthro. Building an intricate set out of their previous releases – 2017’s self-titled Lycanthro, and 2018’s “Four Horsemen of the Apocalypse“, the band captivated the crowd and got them to bow down and appreciate their technical prowess on the guitar. As their set went on, it became apparent that they had an inside joke with Ammo – as they had both just gotten back to Ontario from playing some Newfoundland shows together – and throughout the set they would take a few minutes to sing a few bars of Kiss’ song “Lick it Up“. For the band’s grand finale they played the epic song “Pale Rider“. It saw the band play as though they were trying to conjure up the mythical character of the title track. With the final notes of the song fast approaching, main vocalist and guitarist James Delbridge walked out into the crowd and stood on a chair to draw the attention to the final shredding that the band had crafted an enchantment over the crowd and got them up and eager for the finale of the evening.

When it was time for Iron Kingdom to take the stage, the band came out ready to get the crowd moving with their new wave of traditional metal (NWOTHM). The band were a fury onstage as they played “Samurai“, drawing the crowd in with their high-flaring vocals and guitar-manship. Their flare of dramatic enticed the crowd to give Iron Kingdom them reign over their attention and made their performance of “Paragon“even more exemplar. During their set, drummer Chris Sonea was given sometime to shine whilst the band was changing instruments and he made it clear why he was the sovereign upon the Iron Kingdom drum throne. A barrage of his drumming led the charge and guided the band back on stage, and when they came together to tear into their next song the crowd was eager to move and shake along.

Ending on a high-powered note, Iron Kingdom and their bill mates delivered one hell of a way to spend a Tuesday night. Be sure to check out all the bands when they play a city near you! 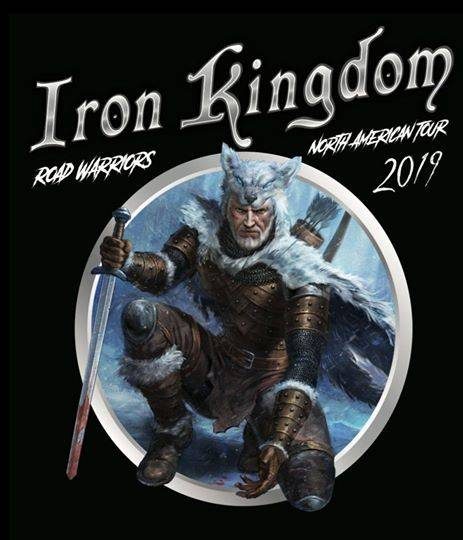