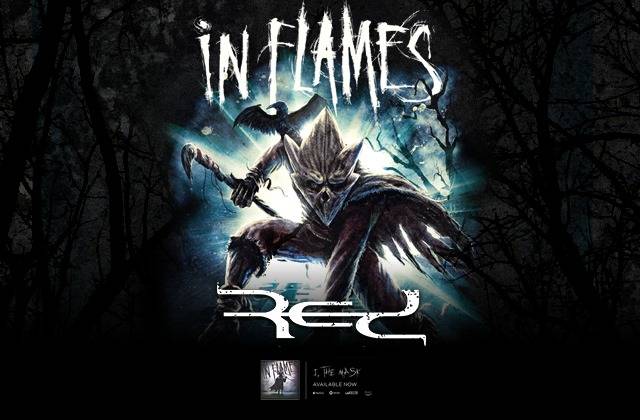 Orlando, Florida (December 15, 2019) – Earlier in the year Swedish metal masters In Flames released their thirteenth album I, The Mask. Finally, the band made its way down to sunny Florida in support of their latest release for a stop at The Hard Rock Live. Along for the ride and to support the tour are Arrival Of Autumn and RED. With a heady line up like this, metal fans were sure to have a headbanging good time.
Relative newcomers to the scene Arrival Of Autumn were first take the stage. Hailing from Canada this five piece band rocked hard. With Harbinger, their first major label release, happening in just the spring of this year, they showed the maturity of a band that has been doing this for far longer. Lead singer Jamison Friesen worked the stage like he’s been doing this his whole life and belted out their lyrics with passion. With the performance that they laying down, it was no surprise that everyone in the place was really getting into it. For sure, this was no band there just to take up space, they delivered the goods and are definitely a band to keep an eye on.

With a strong opening act, you better be able to keep up the energy of a show like this and RED was more than up to the task. With multiple Dove Awards (given to Christian bands) to their name, you wouldn’t think a band that has its roots in Christian music could be this heavy. But tonight, they showed the crowd that they fit the bill perfectly. With three risers setup right up at the front of the stage, there was plenty of space for lead singer Michael Barnes to prowl as well as twin brothers Randy Armstrong on the bass, and guitarist Anthony Armstrong to get up and entertain the crowd. For sure Barnes made plenty of use of those risers. Throughout their performance he jumped multiple times from them catching big air in the process. If that wasn’t enough, he even jumped off the stage and leaned over the rail while singing while being swarmed by fans excited for the up close action. Their show wasn’t just action, they had substance too. Their songs flashed more than just hard hitting metal, but they had a nice melodic sound too peppered with a bit of alternative to really create a distinct sound.

With In Flames thirteenth album I, The Mask out, it’s no surprise that their fans are coming out to catch their shows. Tonight, all their fans at The Hard Rock Live would get to hear them play cuts off this album as well as plenty of others from their storied career. From the moment they kicked off their performance with “Cloud Connected”, everyone knew these metal gods from Gothenburg Sweden brought their A game. After a scintillating performance of “Only For the Weak”, lead singer Anders Friden said to the crowd “That was a ten out of a ten”. He was spot on right. The first song they played off their latest album was “Call My Name” and it sounded great. The dueling guitar work was full of punch and kicked ass. At one point during a break between songs, one of the fans was still crowd surfing and Friden spotted him and commented that is a dedicated fan to crowd surf without music. Song after song they killed it. Whether they were deep diving back into the beginning of their career with “Behind The Space” off of Lunar Strain or “The Jester Race” from the album of the same title, all the way to “Voices” off their latest release, their was something off their mammoth eighteen song setlist for everyone. No concert would be complete without the band playing their latest single, and In Flames didn’t disappoint when they played a white hot version of “I Am Above”. The perfectly titled and played song “The End” capped off this perfect night of hard rock heaven.
With this being a late December show alongside their new album I, The Mask, it turned this show into an early Christmas present that In Flames and the other bands gave to their fans. It was the perfect gift to give metal heads. Tons of great songs played by incredible musicians that left everyone sweaty and satisfied as they left The Hard Rock Live with smiles on their faces and stories to tell their friends.