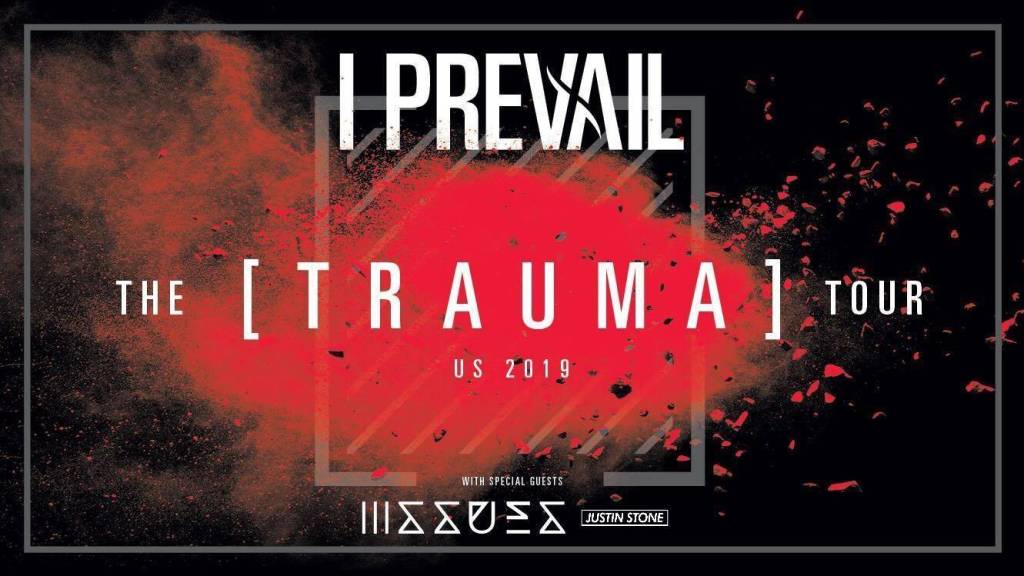 Orlando, Florida (August 3, 2019) – On Saturday night August third I Prevail brought their Trauma Tour to the House Of Blues in Orlando, FL. With a huge line wrapped around the building, and people ambling up to the box office only to be rebuffed as tonight’s concert was sold out, this had the makings of an exciting evening. Besides I Prevail, the lucky fans that were able to score tickets would also get to see Justin Stone an up and coming hip hop performer, and Issues a band that infuses pop, R&B, and metalcore into their own sound.

With the crowd fully packed into the House Of Blues, up and coming rapper Justin Stone took the stage. With only a drummer on stage, all eyes were glued to him throughout his performance. What a performance it was. He relentlessly stalked the stage going right to the edge and making eye contact with everyone lucky enough to get to the front. If that wasn’t enough, he ventured out into the packed house and continued his performance. After asking how strong everyone was feeling, he crowd surfed the entire floor and capped it off by crowd standing, all without missing a beat. Now this is how you build a following, with dynamic unforgettable performances and gobs of audience interaction.

After a lightning quick change over, it was time for Atlanta, GA. Based band Issues to take the reins. With a sound that blends pop with hip hop and metal, this had the makings of being a fun performance on its own. When this four piece band hits the stage, the level of energy that they bring is amazing. Bassist Tyler Acord was veritable whirling dervish the whole night with his constant spins and jumps all while never missing a beat during the performance. Their performance was so infectious, that they could make the dead jump up and get into things. Playing a ten song set that went way too quickly, they were able to tap into all of their releases from their eponymously titled first album all the way to their latest single “Tapping Out”.

Finally, it was time for Detroit’s very own I Prevail to close things out. As the band members came out on stage and vocalist Eric Vanlerberghe started in on “Bow Down” the place went nuts. Almost immediately circle pits formed and crowd surfing kicked into high gear. When Brian Burkheiser joined in the party kicked into high gear. As both singers would trade verses the crowd would join in and go note for note. At one point during the show Brian was talking about how during their last tour he needed emergency surgery on his vocal cords and the band was able to soldier on. With that he let guitarist Dylan Bowman take over for “Stuck In Your Head”.  Of course, they had to play their latest hit song “Breaking Down” which is getting tons of airplay on SiriusXM‘s Octane channel. When it came down to the last song of the night, Eric Vanlerberghe told the audience he wanted everyone there to let out every ounce of energy that they had. With that, everyone in the place gave it all and the atmosphere was pure sweat, mayhem and most of all FUN!
What a great night of music it was. All three acts gave it everything they had and then some. With the big push that I Prevail is getting from SiriusXM Radio this band will blow up quickly and soon be in much bigger venues. So, get out and see them NOW! You’ll love every minute of their show.