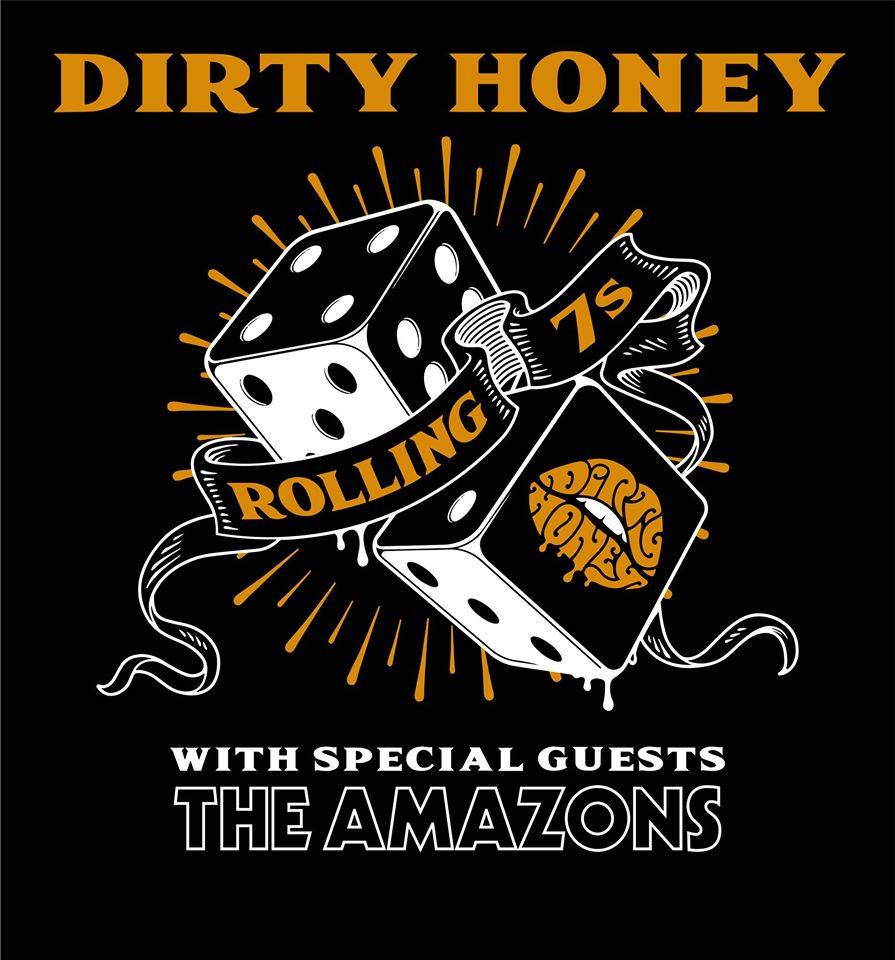 Cape Coral, Florida (January 24, 2020) – It’s Friday night and the hottest party for miles is going down at the Dixie Roadhouse in Cape Coral, Florida. This just isn’t any usual ‘the weekend is here, let’s blow off some steam’ kinda evening. The hottest new rock band in the country is pulling into town with their Rolling 7’s tour. That’s right – Dirty Honey – the only band to have a number one hit song without being signed to a record label has rolled into town to show everyone what the buzz is all about!

Opening up the festivities on the tour is a newcomer to the states, The Amazons; coming all the way across the Atlantic from the U.K. for their first U.S. tour. This rocking quartet hasn’t been around for too long – they just formed back in 2014. However, in that short amount of time they have put together two full length albums – their self-titled debut, and Future Dust, which they are touring behind, as well as an EP and a live album.

When they hit the stage, lead singer Matt Thomson looked every part the English rock star. From his Bowie-esque hair cut, to his suit decked out with stars, snakes, and skulls. As they are new to these shores the crowd looked on with curiosity as to how they would sound. Once they kicked in with their distortion-laden guitars and driving beat everyone was hooked! The looks on everyone’s face said it all – these guys rock!! What their set lacked in time, it made up for it with punch. Playing a mix of songs from both of their albums, they definitely got the audience warmed up for a rock show and made a load of new fans as well.

Now it was time for the band that Revolver Magazine called one of the top five bands most likely to breakout in 2020 to take the stage. Yes, Dirty Honey, the California- based foursome that is the only unsigned band to ever top the charts is in the house tonight. Having been in existence for only three short years, their meteoric rise was kick-started when Slash of Guns N Roses fame caught wind of them and tabbed them to open up for him on his solo tour. Since then, they have released an EP that has been a resounding success, as well as touring with some of the hottest rock acts out there.

When singer Marc Labelle hit the stage along with his band mates, John Notto, the guitarist, Justin Smollian, on bass, and drummer, Corey Coverstone, all the people with VIP laminates that lined the rail cheered wildly. Then again, the rest of the crowd in the venue let them know equally loudly how thrilled they were at their arrival.

They lead off the show with “Scars”. For a band so new to the scene their performance was highly polished and sounded great! Wearing his Mad Hatter style top hat and working the crowd like a seasoned pro, Labelle has the part of front man down pat. They quickly followed it up with “Break You” and “Fire Away” off of their self-titled EP.

While many bands fall into some kind of category, or get cubby-holed into some sub-genre, these guys almost are a throwback to another era. They play straight ahead, unapologetic rock n’ roll, while being fresh and not coming off as retro. During the show they even brought back the lost art of the solo. Coverstone was first up to have the stage to himself, playing a killer solo. Guitarist, Notto, had his time as well, proving he can tear it up with the best of them. Even Smollian got a turn in. With a “wah-wah” pedal under foot and with full command he took the crowd on a wild ride!

During the show Labelle gave thanks to Slash for helping the band come to the forefront. He told the crowd that he and Notto did some digging into what got Slash started into rock. They found out one of his favorite songs was the Aerosmith hit “Last Child”. With that they ripped into a killer version of it and played it like they owned it. They matched every ounce of swagger that Aerosmith put into the song .

The last two songs of their set were “When I’m Gone” and “Rolling 7’s“. What better way to close out a show than with the song that blasted them to top, and their current hit that’s burning up the radio. With Labelle belting out the lyrics like the budding rock star that he is, and Notto shredding things up – the crowd was worked into a fever pitch. If there was ever a perfect way to end a concert this was it.

What a great show both these bands put on. With all the hype that is out there, Dirty Honey did more than just live up to it, they blew it out of the water. They showed the entire audience that not only is the rock alive and kicking, but its future is brighter than ever. This is one band that you must see now, so when they are playing arenas you can tell your friends you saw them in a small venue.