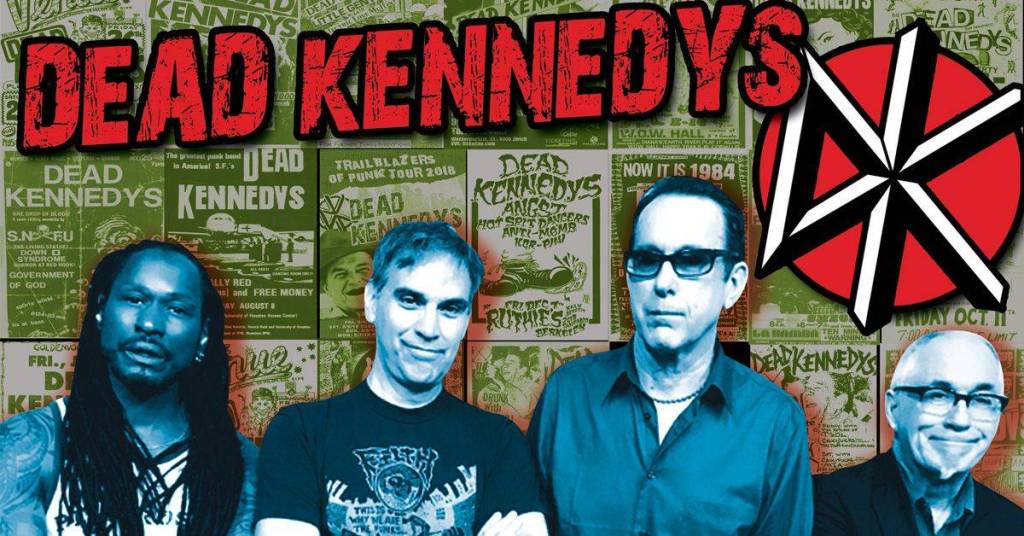 Norfolk, Virginia (March 10, 2020) – D.O.A. takes the stage here at The NorVa as guitar and bass notes start to build up and drum cymbals start to rumble. A silver bearded man runs out on stage and yells into the mic, “Ladies and gentlemen, all the way from Vancouver, Canada, the land of the free, D.O.A.!” and the band starts. I hear random outbursts of cheer from the punk rock fans as the bands stage presence gets everyone energized.

The Canadian veteran punk rockers tear up the stage with their aggressive energy. Singer/Guitarist Joe Keithley is tossing his guitar around like a sword as he screams into the microphone. Bassist Mike Hodsall, joins in and he periodically launches himself into the air with stylishly time bass jumps and high kicks as drummer Paddy Duddy keeps the musical chaos intact.

There is a circle pit furiously spinning throughout the set and the crowd sings along to some of D.O.A.’s classic songs.

The fans are alive as the three piece Vancouver band continues to rip through their set. Known for outspoken political opinions, Joe, the bands founder comments on some of the current political climate; “This ones for Bernie Sanders, it’s called “Class War”!

Joe points his guitar at the crowd like a rifle and he backs up across the stage. Still swinging the instrument around as he leans back into the microphone just in time to belt out more lyrics of the song “F*****d up Donald”.

Another crowd pleaser shortly follows with the song “Bombs Away”.
“hey hey, get out of my way just got back from the u.s.a.”

During a brief pause between D.O.A. and Dead Kennedys I went to check out what merch the bands had for sale in the back of The Norva. There was a big variety of shirts for each band including a classic “Nazi Punks F**k Off” shirt that I had to pick up.

The NorVa’s lights drop and an unfamiliar version of the theme song “Ecstasy of Gold”, from film The Good, the Bad and the Ugly, plays as the band enters from stage right. I first see drummer D.H. Peligro walk onto stage and behind his drumset holding sticks and wearing drumming gloves.

The bands first song of the night is “Forward to Death” , I hear, “This ones for Donald Trump!”

To my pleasant surprise, singer Skip McSkipster does not disappoint. His stage presence is great as he twists and leans his body around the stage.

Dead Kennedys Bassist Klaus Flouride says into his microphone, “Hello Norva, we are here to play music, but we don’t do that so well”, and the classic song “Winnebago Warrior”, starts.

The crowd is screaming back lyrics as each song is being performed. The iconic catchy lyrics are pulsing through my brain as I remember my high school skateboarding days of listening to the band. Guitarist East Bay Ray’s unique guitar riffs cuts through the bass and drums as the vocals captivate the audience who is still singing along.

Peligro is solid, and has a unique flare in the songs that shine through just like the recordings themselves.

McSkipster says, “Thank you very much, kind kind people of Norfolk, My own father used to come out here to the Naval Base to work on The Enterprise, when it was docked here. So I know a little bit about your town…”

He continues, “Are you people sports fans?”…

“Hey Ray, how bout them hogs?” as East Bay Ray begins to ply the intro to “Jock-o-Rama.”

The song ends and McSkipster provide more banter;
“We need love and compassion in this world.
And Im not just saying the because you’re all punk rocking around!”
“I usually do not like to be a very political person.” Multiple people in the crowd yell “Bullshi*t!” as he goes on,… “However this is a nation that is built on immigrants. I feel if immigrants and refugees feel a need to come to this country they should do so!” And the fans applaud.

“On the other hand lets be honest there is just a few to many people in this country. It’s up to you and I to do something about this. I’m up from New York and I’m like really tight with AOC, and first we thought we would do something like eat the babies. But then we really thought about it and realized the band already has a song that addresses this issue”.

“Behold the sparkle of champagne
The crime rate’s gone, feel free again
Oh, life’s a breeze with you, Miss Lily White
Jane Fonda on the screen today
Convinced the liberals it’s okay
So let’s get dressed and dance away the night”

The song ends and we get more banter from Skip; “I know you don’t want to kill the poor but you are responsible for one murder. Thanks to you we get all the Taylor Swift we want”.“MP3 Get Off the Web”, begins which is a rewrite of the bands original “MTV Get Off The Air”.

D.H. is tapping melodies on his symbols and the crowds loves it. East Bay Ray’s intro riff to “Too Drunk to F**k”, begins.

“Folks I need you to settle down, I feel kind of responsible, we’ve been doing this tour for the past month, … I’m kinda running a fever, Ive been coughing between songs. Ok but I was looking out for myself and I did actually go see a doctor yesterday. They ran a few tests and it wasn’t good folks. Doctor informed me that out of everything else going on in the world right now, I am too old for rock and roll”!

The crowd laughs, “thats not the worst of it, Im sure you know it’s coming,.. fact of the matter is that all of YOU are too old for rock and roll.”

“Folks let me give you a word of advice, punk rock (zurbut sound), Daft punk yes”!

After jokingly threatening to cut the show short, McSkipster introduces the band. “I like my beats fast and my bass down low, no one plays the bass lower than this, please give is up for Mr. Klaus Flouride. Furthermore if your walking down the street and really need to feel the heat of that rock study beat, friend give up for Moby’s best friend and dummer Mr. D.H. Peligro.”

He then said; “I was told by the health officials not to come down to the crowd. None the less this is the audience participation part of the program”.

“The man from Mars no longer eats cars or smokes cigars. Now he only eats”…and the crowd yells back GUITARS….”Nobody eats guitars like the mofo to my left , please give it up for Mr. East Bay Ray” and the crowd cheers.

Flouride then says; “Here’s a man that need no introduction lets hear it for our singer, Mr. Skip McSkipster”
who replies, “You can thank me later when you get that two weeks paid leave after our meet and greet.”

D.H. speaks for a moment,

“People ask what D.H. stand for, … it could be a bunch of things but what I stand for is…”.

“No homophobia,
equal rights,
equal pay for women
and for god sake man, No racism!

Next was a song that got The NorVa hyped “Nazi Punks F**k Off”.

The show was pack, fun and nostalgic. The new and past members left nothing lacking on the table. An all around good time for Dead Kennedys fans of young and old.

Check out the Dead Kennedys on tour here: http://www.deadkennedys.com/tours.html

Encore
Bleed for Me
Vival Las Vegas
Holiday In Cambodia