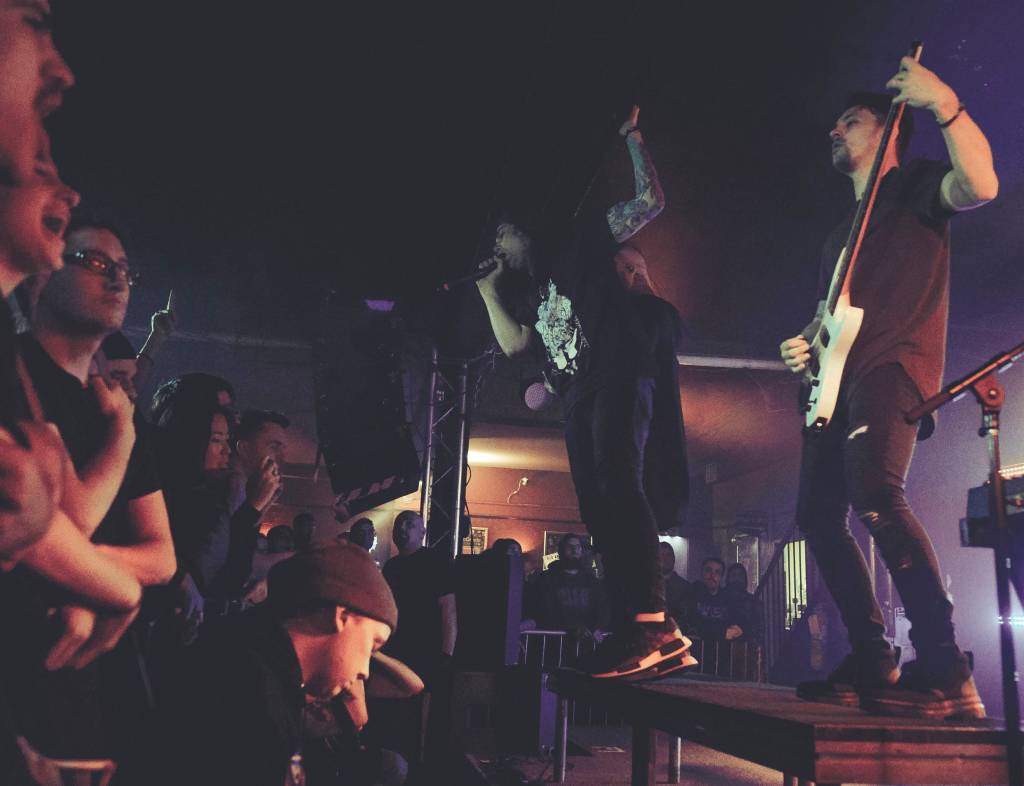 Ottawa, Ontario – (December 10th, 2019) on a cold Tuesday, the crowd at the Brass Monkey was eager to heat up with the Born of Osiris Simulation Tour. Featuring heavy acts in the form of A Scar For the Wicked, The Last Ten Seconds Of Life, Oceano to help Born of Osiris make it a night to remember.

To open up the evening, were locals A Scar For the Wicked. Having a setlist that pulled from their two more popular releases “The Unholy” and “The Necrobutcher“, the crowd began to mosh almost immediately. The band themselves were eager to get the evening off on a great note, as vocalist Eric Forget would jump up on the speaker whilist singing in order to better engage with the crowd. Songs like Darkness Approaches, and the Born From The Grave filled the venue with bloodlust and enticed them to throw thier bodies together and mosh. Ending on the powerful epic The Blood Ritual, A Scar For the Wicked demonstrated some intrsumental and vocal prowess which started the night off on a powerful foot.

Following A Scar For the Wicked, were Pennsylvania natives The Last Ten Seconds of Life. The band started their set out swinging, featuring aggressive gutteral vocals and chuggy guitars that pushed and pulled the crowd into moshing and singing along. As their bassy notes and drum work crushed into you – to such an extent that the barricade vibrated from the tones – the atmosphere made it difficult to standstill and encouraged their music be enjoyed via moshing. Vocalist John Robert C. took the the band’s time on stage to get up close with fans by hoping onto the barricade from to sing along with the crowd and give those well versed in the band lyrics to have their opportunity to shine.

After The Last Ten Seconds of Life, Oceano were eager to give their all for Ottawa at the band hadn’t played in over five years. For their set, Oceano had the venue stifiling with energy and the band gave the crowd every opportunity to release it. This aggression all came to a head when they began with Path to Extinction , which saw the crowd lose their minds and throwback all the energy that the band provided them with. Ending with the crowd clapping and jumping along Oceano ended on a strong note and got the crowd wanting more.

When it was time for Born of Osiris to take the stage, the band was keen to get the now fully packed venue jumping and off the floor. With lead vocalist Ronnie Canizaro descending into the crowd to surf among them for a bit during Machines. With this, the band fired up the venue and got the fans to push themselves agains the barricade causing it to eb and flow with such a force that it could have toppled over. Born of Osiris treated the fans to new songs from The Simulation which were expertly peppered throughout the set between older songs and kept the fleurry of energy from the fans consistent. But it was when the band began to play the  classic  Illusionist track that the fans within the venue lost their minds. With guitarist Lee Mckinney and bassist Nick Rossi with the crowd from their risers, and vocalists Ronnie Canizaro and Joe Buras got down and personal wih the crowd. The energy of the fans was overwhelming, as the venue began to take on a humaid haze from the amount of moshing and singalong that the crowd was releasing. Although the band played an encore, a few people began to line up to collect their jackets. Even though they were in line, those waiting for coat check were dancing and bobbing along to the music. With their set ending, and humidity trying to escape the venue, Born of Osiris showcased why they are still one of the hottest live performances in metal.